A comparative study on the effects of linseed oil and shellac treatment on the hygroscopicity, dimensional stability, and color changes of Chinese ash wood

A Comparative Study on the Effects of Linseed Oil and Shellac Treatment on the Hygroscopicity, Dimensional Stability, and Color Changes of Chinese Ash Wood 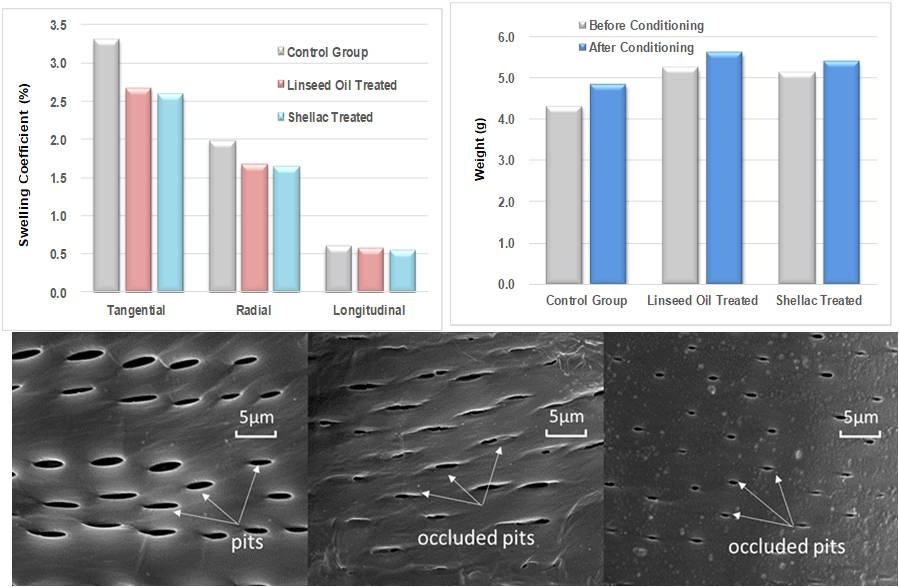 Wood is a versatile and renewable natural biopolymer that is widely used in a variety of fields. Due to its aesthetic appearance and properties, it remains an indispensable product in daily life and culture (Chien et al. 2018). However, lignocellulosic materials often suffer from dimensional instability, photodegradation, combustibility, and biological degradation, which limit the use of wood in various applications. Many methods have been developed in recent decades to improve the dimensional stability, thermal stability, light stability, and biological resistance of wood, including steam-heat treatment (Saeed et al. 2016; Yin et al. 2017), acetylation and silylation (Ziegler et al. 2008), and alkoxysilane modification (Broda et al. 2018) among others. Thermal treatments may darken the original color of the wood and weaken its mechanical properties (Esteves et al. 2011; Popescu and Popescu 2013), whereas chemical modiﬁcations might be detrimental to the environment. Many of these modiﬁcations are also complex and consume large amounts of energy.

Linseed oil and shellac are natural, inexpensive, non-toxic coatings that are widely used in wooden crafts due to their hardness, gloss, and ability to form water barrier films (Farag and Leopold 2007; Kasote et al. 2013; Anastasiua et al. 2016; Weththimuni et al. 2016). Linseed oil is used to manufacture paints, varnishes, inks, soaps, and many other products. Shellac has been applied in a variety of products (e.g., pharmaceuticals, food treatments, children’s toys, and electrical insulation) because of its thermoplasticity, insulating properties, and low toxicity (Bai et al. 2002; The et al. 2008).

Despite these applications, linseed oil and shellac rarely have been used to improve the hygroscopicity of wood products. Thus, the aim of this paper is to use environmentally-friendly modifiers (linseed oil and shellac) and a low-energy consumption process to impregnate Chinese ash at room temperature to improve its dimensional stability and hygroscopicity, while retaining its initial color after treatment. The results will broadly expand its applications in diverse fields. Therefore, the effects of treatment on the hygroscopicity, dimensional stability, and color changes were examined.

Chinese ash (Fraxinus mandshurica), commonly cultivated in northeast China, was sourced from Liaoning Province, China. The test specimens were prepared from sapwood with dimensions of 20 × 20 × 20 mm (length × width × thickness) and an initial moisture content of 75 ± 5% according to GB/T 1931 (2009) (Zhao et al. 2009). All specimens were dried at 103 °C.

Linseed oil (Fabryo Company) was purchased from Conrep Shop (Brasov, Romania). Shellac (98% purity, wax free) and ethanol (90%) were purchased from Chuxiong DES Shellac Co., Ltd. (Chuxiong, Yunnan). Linseed oil and shellac ethanol solution (20% g/mL) were used to impregnate wood samples in a vacuum chamber (Shanghai Laboratory Instrumental Works Co., Ltd., Shanghai, China). Twenty dry specimens were weighed, immersed in these liquids, and treated in a vacuum chamber at a pressure of 0.01 MPa at room temperature (20 °C) for 1.5 h. Afterward, the pressure was equilibrated to atmospheric pressure for 1.5 h, and the reverse process was performed three times to impregnate the samples with linseed oil and shellac. Residual liquid was removed from the specimen surfaces. The control group was not impregnated with linseed oil or shellac. After treatment, the specimens were naturally dried for 7 days until ethanol completely evaporated. They were then dried at 103 °C, and their oven-dried weight was measured.

Pre- and post-treatment surface color measurements on the tangential sections of all specimens were performed using an AvaSpec-USB2 spectrometer (Avantes, Netherlands) equipped with an integrating AVA sphere with a diameter of 80 mm. Measurements were made using a D65 standard illuminant and a 10° standard observer. The reflectance percentage, collected at 10 nm intervals over the visible spectrum (400 to 700 nm), was converted into the CIELab color system.

The color differences between treated and control samples were calculated based on Eq. 1,

where  L*,  a*, and  b* are the differences between the pre- and post-treatment values of L*, a*, and b*, respectively. Low  E values corresponded to a small color difference.

The WPG was determined based on the weight before and after impregnation and was calculated using Eq. 2,

Swelling tests were performed according to the GB/T 1931 (2009) standard. The treated and control groups were oven-dried and stored in a climate-controlled chamber at 20 °C at 65% humidity to reach the equilibrium moisture content (EMC). The dimensions and weights of the specimens were measured before and after conditioning, and the swelling coefficient was calculated using Eq. 3,

where a is the swelling coefficient (radial, tangential, or longitudinal), l0 denotes the initial specimen dimension, and lw represents the dimension after conditioning.

Specimens were placed in a chamber set to 20 °C and 65% humidity to reach the EMC according to the GB/T 1931 (2009) standard. Following conditioning in the climate chamber, the MA was calculated using Eq. 4,

where wb (wa) denotes the weight of the specimens before (after) conditioning in the climate chamber (g).

The surface shapes of the samples were assessed based on their morphologies using a scanning electron microscope (SEM, Quanta 200, FEI Company, Eindhoven, Netherlands) to investigate variations in their physical structures.

The measured color data (mean of 20 values) for control and treated wood samples are summarized in Table 1. Chinese ash is a white-yellow wood with pre-treatment color parameters of L* = 70.3, a* = 6.5, and b* = 17.6. Post-treatment, L* slightly decreased, while a* and b* slightly increased. The color difference values were 1.3 and 1.4 after linseed oil and shellac treatment, which were much smaller than heat-treated wood (Sivrikaya et al. 2019). According to the correlation between ΔE, the calculated color differences, and changes visible to the human eye (Allegretti et al 2008), these color differences are the smallest visible differences.

The moisture content of wood has a significant impact on its stability when it reaches the fiber saturation point. To reveal the effect of shellac solution impregnation on the dimension stability, the hydrophilicity of wood was evaluated by measuring the moisture absorption (MA). Figure 2 illustrates the weights of specimens before and after conditioning in the climate chamber at 20 °C and 65% humidity.

Fig. 2. Weights of the specimens before and after conditioning

The MA values for the samples after conditioning were 7.0% for the linseed oil-treated specimens, 5.1% for the shellac-treated specimens, and 12.0% for the control group. Compared with the control group, the MA of the linseed oil-treated group was 41.5% lower, while the MA for the shellac-treated group was 57.5% lower. The results show that linseed oil and shellac treatment markedly decreased the MA of wood, which should increase its dimensional stability.

The SEM micrographs of the treated samples and those of the control group (Fig. 3) show that linseed oil and shellac treatment greatly influenced the tissue structure of the samples and that the wood was impregnated with linseed oil and the shellac solution. Pits, which serve as the main moisture passageways to the wood interior (Panov et al. 2010) were occluded in the treated groups, which prevented MA when the wood product was exposed to moisture, thereby improving its dimensional stability. Therefore, linseed and shellac prevented MA when they impregnated the wood interior, which also improved the dimensional stability of wood.

This work was supported by Project from International Cooperation Joint Laboratory for Production, Education, Research and Application of Ecological Health Care on Home Furnishing, the Nanjing Forestry University Foundation for Basic Research (Grant No. 163104127), the National Key R & D Program of China (Grant No. 2016YFD0600704), and the Priority Academic Program Development (PAPD) of Jiangsu Province, China.

Sivrikaya, H., Tesarova, D., Jerabkova, E., and Can, A. (2019). “Color change and emission of volatile organic compounds from scots pine exposed to heat and vacuum-heat treatment,” Journal of Building Engineering 26, 100918