The main pentosan components of sugarcane bagasse, which can be subjected to alkaline hydrolysis, are xylose, arabinose, glucose, and galactose. The pentosan reaction mechanism was considered for alkali-treated bagasse with variation of temperature and time. The kinetics of pentosan degradation were studied concurrently at temperatures of 50 °C, 70 °C, and 90 °C, with a solid-liquid mass ratio of 1:15, a stirring speed of 500 revolutions/min, and different holding times for bagasse alkali pre-extraction. With respect to residual pentosan content and the losses of raw material, the hydrolysis rates of alkali pre-extraction and pentosan degradation reactions of bagasse all followed pseudo-first-order kinetic models. Finally, the main degradation activation energy was determined to be 20.86 KJ/mol, and the residual degradation activation energy was 28.75 KJ/mol according to the Arrhenius equation.

The main pentosan components of sugarcane bagasse, which can be subjected to alkaline hydrolysis, are xylose, arabinose, glucose, and galactose. The pentosan reaction mechanism was considered for alkali-treated bagasse with variation of temperature and time. The kinetics of pentosan degradation were studied concurrently at temperatures of 50 °C, 70 °C, and 90 °C, with a solid-liquid mass ratio of 1:15, a stirring speed of 500 revolutions/min, and different holding times for bagasse alkali pre-extraction. With respect to residual pentosan content and the losses of raw material, the hydrolysis rates of alkali pre-extraction and pentosan degradation reactions of bagasse all followed pseudo-first-order kinetic models. Finally, the main degradation activation energy was determined to be 20.86 KJ/mol, and the residual degradation activation energy was 28.75 KJ/mol according to the Arrhenius equation.

Bagasse is the residual by-product obtained after the extraction of juice from the crushed stalks of sugar cane (Nie et al. 2007). The production of bagasse has reached up to 200 million metric tons annually (Tu et al. 2006). It mainly grows in Brazil, Cuba, and India, etc. Within China sugar cane is grown mainly in the southern parts, and the supply of this renewable, easily stored, and easily transported resource has been described as “inexhaustible” (Sun and Peng 2003). The traditional approach used in most sugar mills is to burn most of the bagasses directly for the production of energy, an approach that wastes resources and pollutes the environment. Researchers have begun to advocate a positive development of biomass energy and materials through the use of bagasse.

Bagasse is rich in pentosans, with contents of 70% xylan and 30% poly-arabinose. After processing, pentosans can be converted into energy, chemicals, food, medicine, or beverages (Liu 2008). Because the production of hemicelluloses is second in amount only to the production of cellulose, the effective use of pentosans has a great potential value and significance in biomass feedstock applications. In a conventional pulp cooking process, most of the pentosans are present in the black liquor and are converted to heat, yielding only about 13.6 MJ/kg (Mabee and Saddler 2006). In other words, it is difficult to realize their economic value. Thus, the extraction of hemicelluloses before pulping has the potential to rationalize the use of resources and has opened up new possibilities (Aguilar et al. 2002; Binod et al. 2012; Gabrielii et al. 2000; Li et al. 2013; Roos et al. 2008; Shi et al. 2012; Tunc and van Heiningen 2008; Wyman et al. 2005; Zhang and Wei 2008; Xu et al. 2003). It is clear that the alkaline extraction hemicelluloses are the most widely studied, and they could potentially achieve higher performance in hydrolysis compared to other methods from economic and environmental standpoints.

Many reports have discussed pentosan hydrolysis kinetics (Horwath et al. 1983; Maloney et al. 1985; Scully et al. 1986; Michniewicz et al. 1992; Luo et al. 2013; Zhao et al. 2013), yet there has been relatively little research concerning the pentosan hydrolysis kinetics of bagasse. So the present work is also focused on kinetic aspects. The aim was to develop an understanding of the complex carbohydrate degradation kinetic mechanisms involved and hence to optimize the system for a much improved efficiency of hemicelluloses extraction. A low-temperature alkali bath was used to extract hemicelluloses, and then the reaction time and reaction temperature were varied to determine the yield of pentosan extraction, while exploring a new method based on hydrolysis kinetics and degradation kinetics of pentosans with variation of temperature and time. The crucial part of this new technology was to build a pentosan dissolution kinetic model and to provide effective evidence for the control of alkali pre-extracted carbohydrates, and then through the Arrhenius equation to calculate the main degradation activation energy and the main residual degradation activation energy of pentosan (Bin 2009).

To validate the proposed approach, practical experiments were carried out as follows.

Combining the principles of dynamics theory and activation energy with variation of temperature and reaction time, the pentosan reaction mechanism was studied for pretreatment and extraction. The pentosan quality and content of bagasse were determined. The main steps are listed as follows:

The oven-dried (105 oC) ingredients (50 g) were treated with an active alkali charge of 50% (w/w), and a solid-liquid mass ratio of 1:15 (w/v), at temperatures of 50 oC, 70 oC, and 90 oC with the variation of reaction time to extract pentosans. The 1-L stainless steel reactor was taken out and put into cold water for 5 min immediately according to different reaction times when reaching the set temperature. The bagasse samples were washed three times with hot water of 50 oC to 60 oC, then washed in cold water and air-dried.

Results of evaluation of hydrolysis kinetics showed how various factors (time, temperature, etc.) affected the hydrolysis reaction. The purpose of hydrolysis is to obtain maximum bagasse hemicelluloses. Poly-arabinose 4-O-methyl-glucuronic acid xylose is the main substance of bagasse hemicelluloses, and it is easily susceptible to alkaline hydrolysis (Bin 2009). Besides, the main factors of affecting alkaline hydrolysis are alkali type, solid-liquid ratio, temperature, and time. Other factors affecting the reaction speed are the reaction concentration and the reaction temperature. In order to study the hydrolysis reaction speed, tests were carried out at an active alkali charge of 50% (w/w), with a solid-liquid mass ratio of 1:15 (w/v), and with the reaction temperature reaching up to 90 oC during the reaction at first. Then the reaction vessel was kept tightly covered to prevent volatile loss of the solvent. It was found that the concentration of the solution remained substantially constant in this case.

For studying the influence of temperature on alkaline hydrolysis, the temperature was fixed at 50 oC, 70 oC, and 90 oC, respectively, and the heating time was 20 min. The bagasse samples were put into the cuvette for hydrolysis pre-treatment.

To test and verify whether the hydrolysis reaction is a pseudo-first-order reaction, a plot was made showing ln (m0 / mt) versus extraction time t. Regression analysis was carried out to test whether the data followed a linear relationship. The variable m0 represents the initial quantity of raw materials (g), and mt is the quantity of materials at t h, g. Experimental results are shown in Figs. 1, 2, and 3. It can be seen that coefficients of determination (R2) were 0.9529, 0.9005, and 0.9184 at 50 oC, 70 oC, and 90 oC, respectively, by regression analysis. Linear plots between ln (m0/mt) and t are shown in the figure; it can be concluded that the hydrolysis reaction was fairly well represented by a pseudo first-order-reaction model.

Under the specified temperatures and different holding times, the pentosan content of extraction residues were measured respectively. According to the relation of time and extraction amounts of pentosan and based on the rules of hemicelluloses degradation, the extraction amount of pentose was measured, and the extents of dissolution of hemicelluloses (or carbohydrate) were found under different conditions of pre-extraction treatment. The results are shown in Figs. 4 and 5.

Fig. 4. Effects of the temperature and time on yield of pentosan

Fig. 5. The change of pentosan extraction content of bagasse with NaOH

where t denotes the reaction time, and X0 represents the pentosan content. Based on fitting of data to Eq. 1, one can determine whether pentosan degradation belongs to a pseudo-first-order reaction and one can then calculate reaction rate from Eq. 1.

According to the proposed method, the first step is to make a plot of lnX vs. t and to determine whether there is a linear relationship. Secondly, one calculates whether there is a nearly constant reaction rate, as represented by the value of k at different temperatures according the integrated form of the equation for a pseudo-first-order reaction. If lnX vs. t is a linear and k is also close to a constant, then it can be concluded that the reaction is a first-order reaction. Finally, it is pseudo-first-order reaction if lnk vs. 1/T gives a straight line, based on kinetic theory. Values of X and natural logarithm (1nX) can be seen in Table 1.

Fig. 6. Variation of the natural logarithm of pentosan content and time

From Fig. 6, a linear relationship of lnX vs. t was apparent. The hydrolysis reaction was divided into two stages under different holding temperatures, namely the main polyethylene pentose degradation phase and the residual polyethylene pentose degradation phase. These two phases were attributed to the different chemical structures of pentose, which generally fall into two classes. While most pentosans degrade easily, a small amount appears difficult to degrade. Therefore, the different classes of pentosan moiety have different activation energy. During the major part of the pentosan dissolution phase, when the temperature was 50 oC, 70 oC, and 90 oC for 4 h, the pentosan dissolution rates were 34.68%, 50.60%, and 60.28%, respectively. Xylan was hardly soluble when the temperature was under 50 oC. As a non-wood raw material, bagasse is easily penetrated by NaOH. So it could be inferred that alkali infiltrated into the raw materials during the main degradation stage of pentosan, along with partial dissolution of the hemicelluloses. Therefore, this stage can be explained as a process in which the dissolved chemical gets into the cell wall and has a reaction with pentosans, and then reaction products spread out from the cell wall (Zhang 1993).

The second stage is the residual pentose degradation phrase. Under the conditions of highest temperature 50 oC, 70 oC, and 90 oC, the pentosan dissolution rate was only 2.72%, 4.28%, and 5.48%, respectively, if one were to continue to hold the temperature constant for 10 h. Although this phase of dissolution was less than 6% of the pentose, it needed a longer cooking time, which showed that the structure and performance of residual pentosan removal stage and dissolution of pentose stage were different from the main degradation stage. It may be that dissolved pentosan is a type of macromolecule with stable structure, high molecular weight, and low reactivity, which made it harder for the pentose to dissolve (Zhang 1993).

The Arrhenius equation is given by

According to Arrhenius equation, the infinitive integral can be defined as follows, 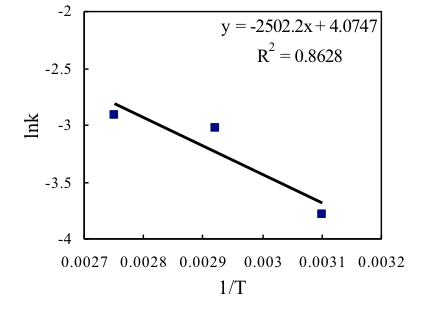 Fig. 7. Relationship between lnk and 1/T of main degradation stage 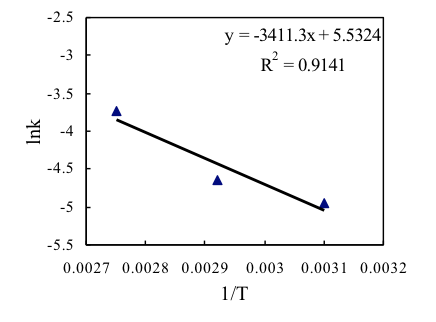 Fig. 8. Relationship between lnk and 1/T of residual degradation stage

In this study, considering a new approach related to pentosan hydrolysis kinetics of bagasse alkaline pre-extraction, one can conclude the following:

Bin, D. (2009). “Study on the process and mechanism of pre-extraction of hemicelluloses extracts from the bagasse prior to pulping,” Master thesis, University of Guangxi.