The Baili Rhododendron Nature Reserve is the largest low to mid altitude native rhododendron forest at its latitude on earth, and it enjoys the reputation of being “the earth ribbon” and “the world garden” (Chen et al. 2008). Thousands of tourists visit the reserve annually, creating a huge economic value that has driven local economic development. However, according to field surveys, the flowering periods of the Baili rhododendron forests are gradually shortening, and seedlings have become increasingly rare. This has become an area of interest, with many scholars investigating the causes for the shift in flowering period and the difficulty in natural regeneration of rhododendron forest communities.

Forest community regeneration refers to the process by which tree species expand, from seed germination and seedling formation, to finally settling in a favorable environment. Allelopathy is one phenomenon affecting the formation, development, and succession of forest communities. Allelopathy occurs when certain metabolites that impact the germination, growth, and development of certain plants are released by other plants; allelopathic interactions can occur both interspecifically or intraspecifically (Christina et al. 2015). Allelopathy can act as a biological stressor that makes the regeneration of forest communities difficult, and it has become the focus of much of the research on natural regeneration disorders of forest communities (Tomar et al. 2015). Various chemical substances found in abundance in wild rhododendron communities (it is currently unclear which one is specific) can inhibit seed germination, thereby affecting the natural regeneration of the community (Nilsen et al. 1999; Chou et al. 2010). For example, dihydridiconiferyl alcohol inhibits the germination of lettuce (Carillo et al. 2010). Polyacetylenes cis-dehydromatricaria ester, lachnophyllum ester, and matricaria ester have certain allelopathic effects on rice growth and seed germination; a high concentration of vanillin causes eggplant autotoxicity and was found to increase the risk of disease (Shaoli et al. 2011). The germination of seeds and the growth of seedlings are highly vulnerable stages, but absolutely critical for forest regeneration. Studies have shown that the forest community of the Baili Rhododendron Nature Reserve is rich in allelochemicals (Fu et al. 2019; Li et al. 2019). Therefore, it is necessary to understand the effect of these allelochemicals on forest regeneration, and in-depth empirical investigations into the metabolites released in the Baili rhododendron community are required. This study used GC-MS to determine the allelochemical composition in the leaves of four rhododendron species.

Overview of the Research Site

The Baili Rhododendron Nature Reserve is located at the junction of Qianxi County and Dafang County in Guizhou Province in southwest China (Fig. 1). The coordinates are 105°45’~106°04’E and 27°08’N~27°20’N, and the altitude is 1500 to 1800 m. The average relative humidity of the area is 84%. It has a northern subtropical humid monsoon climate. The lowest and highest average monthly temperatures are 2 °C (January) and 21 °C (September). The annual precipitation ranges between 1000 and 1100 mm. 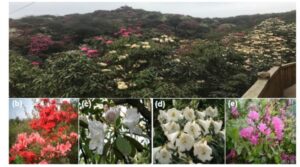 From April 2 to 3, 2015, fresh leaves of R. simsii, R. decorum, R. liliiflorum, and R. pulchrum were collected from the Baili Rhododendron Nature Reserve. The leaf samples were processed using two methods: (1) leaves were placed in a large clean Erlenmeyer flask and soaked in acetone for 90 min. The acetone solution was saved for analysis, and the leaves were wrapped in tin foil for testing. (2) Leaves were directly wrapped in tin foil and brought back to the laboratory. Three samples of each leaf were weighed, and exactly 5 g of each was soaked in acetone for 24 h, after which the extract was filtered. GC-MS analysis was then performed on 1.0 μL of the three different treatment solutions.

Instruments, reagents, and chemical analysis: the compositions of volatile chemicals in leaf specimens were analyzed using a gas chromatography-mass spectrometry (Agilent7890A/5975C GC/MSD; Agilent Technologies, Santa Clara, CA, USA) system operating in EI mode, with an HP-5 MS capillary column (30 m × 0.25 mm ID, film thickness 0.25 mm) coupled directly to the MS. The carrier gas was helium, with a flow rate of 1.0 mL/min. The oven temperature proceeded through a program of 50 °C for 1 min, then 50 to 260 °C at 10 °C/min, and subsequently held steady for 15 min. The injector port was held at 250 °C, the detector at 280 °C, and the split ratio was 1:50. Mass spectrometry recordings were taken at 70 eV; scan time 1.5 s; mass range 20 to 625 amu. Chem Station software was used to handle mass spectra and chromatograms. Compounds were identified based on their mass spectra (compared with RTLPEST3.L and NIST05.L).

Allelopathy can be an important factor in the natural regeneration of forests (Jensen et al. 2011). It is broadly defined as any chemically mediated interaction between plants, but is generally referred to as an inhibitory mechanism (Rice 1984). In recent years, ecological research on allelopathic interactions within plant communities has increased significantly, and significant progress has been made (Touceda-González et al. 2015). Allelochemicals enter the environment through leaching, volatilization, plant decomposition, and root exudates (Rice 1984; Weir et al. 2004), and they affect the growth and development of plants that are close in proximity (Wu et al. 2011).

The Baili Rhododendron Nature Reserve is the largest wild rhododendron forest in China. It has ecological, scientific, and cultural value, and it is of the utmost importance to protect the species in this community. Comprehensive field surveys of the rhododendron community in the Baili Reserve have found very few new seedlings under the canopy of the rhododendron forest. The reasons behind this are unknown, making research into possible causes a top priority. Studies have shown that allelochemicals in the Baili rhododendron forest community are found primarily in the litter layer, which may inhibit forest regeneration (Li et al. 2019). Therefore, this study used GC-MS to identify and analyze the chemical compounds in the leaves of four rhododendron species and their relative composition, and it was found that they contained low molecular weight alcohols, aldehydes, and ester compounds. All these compounds have the potential to affect the germination of rhododendron seeds. Allelopathy within the rhododendron forest community is not surprising; it has been observed that soils where Ericaceae plants were grown can limit the growth of crops (Rice 1984). This study identified 20 chemical substances in the leaves of R. simsii, R. decorum, R. liliiflorum, and R. pulchrum using GC-MS, even after excluding unidentified low-content compounds. The identification of compounds in the leaves of different rhododendron varieties demonstrated the differences in their chemical compositions. 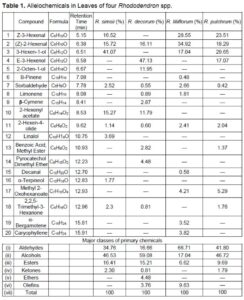 In this study, the analysis determined that the four kinds of rhododendron leaves are rich in chemical substances, but due to the use of acetone for soaking, the extract includes other acetone-soluble compounds, including non-volatile compounds. Among them, aldehydes and alcohols are the most famous seed germination inhibitors, which also include hydrocarbons, ketones, and esters (Bradow and Connick 1990). Macias (1995) used a unified standard biological test for various allelochemicals and found that esters and alcohols had strong allelopathic effects at low concentrations. Indeed, it has been shown that esters can have a significant inhibitory effect on seedling growth (Ma et al. 2014), and alcohols can inhibit seed germination (Gharachorloo et al. 2013; Pereira et al. 2014). Rhododendron leaves will all eventually become part of the litter layer in a rhododendron forest community, contributing nutrients to the forest soil and playing a vital role in the ecosystem (Zhou et al. 2014). However, the chemical substances contained in these leaves will also enter the soil as leaves decompose (Zhou et al. 2014; Dassot and Collet 2015). As these chemicals accumulate, they can have a toxic effect on the growth of understory plants, impeding forest regeneration (Li et al. 2019). Therefore, it is difficult for seedlings to take hold under the canopy of a rhododendron forest. The results provide a scientific basis for understanding the allelopathy of the forest and how it affects the natural regeneration of the rhododendron community.