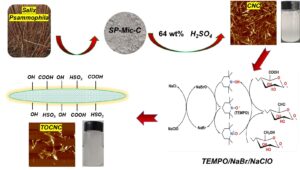 Salix psammophila (SP) is an important sand plant, and could be utilized to develop high-value products. In this work, SP was used as raw material and cellulose nanocrystals (CNC) were prepared by hydrolysis in 64 wt% sulfuric acid (H2SO4) solution, and then, TEMPO/NaBr/NaClO system was used to oxidize CNC to obtain TEMPO-oxidation-cellulose nanocrystals (TOCNC). Fourier transform infrared analysis (FTIR) revealed that after oxidation, there were obvious carboxyl functional groups. Scanning electron microscopy (SEM) showed that both CNC and TOCNC were agglomerated. Under atomic force microscope (AFM) and transmission electron microscopy (TEM), CNC and TOCNC presented short rod fibers, average diameters of 23 nm and 21 nm and average lengths of 213 nm and 165 nm, respectively. X-ray photoelectron spectroscopy analysis (XPS) showed that TOCNC generated a new energy spectrum peak at 289.06 eV, which was the peak of C=O in the carboxyl group. The crystallinity of the CNC and TOCNC were 70.8% and 26.9%, respectively.

Salix psammophila (SP) is an important sand plant, and could be utilized to develop high-value products. In this work, SP was used as raw material and cellulose nanocrystals (CNC) were prepared by hydrolysis in 64 wt% sulfuric acid (H2SO4) solution, and then, TEMPO/NaBr/NaClO system was used to oxidize CNC to obtain TEMPO-oxidation-cellulose nanocrystals (TOCNC). Fourier transform infrared analysis (FTIR) revealed that after oxidation, there were obvious carboxyl functional groups. Scanning electron microscopy (SEM) showed that both CNC and TOCNC were agglomerated. Under atomic force microscope (AFM) and transmission electron microscopy (TEM), CNC and TOCNC presented short rod fibers, average diameters of 23 nm and 21 nm and average lengths of 213 nm and 165 nm, respectively. X-ray photoelectron spectroscopy analysis (XPS) showed that TOCNC generated a new energy spectrum peak at 289.06 eV, which was the peak of C=O in the carboxyl group. The crystallinity of the CNC and TOCNC were 70.8% and 26.9%, respectively.

Salix psammophila is a type of sand shrub, which is broad-leaved and has porous wood. It is an important plant for windbreak and sand fixation in arid areas, and one of the characteristic plants for afforestation in sandy land in Inner Mongolia. It has the characteristics of rapid growth, simple reproduction, high survival rate, and resistance to drought (Bao and Zhang 2012). Salix psammophila should be stubbled regularly to keep its growth vitality, thus producing a high amount of waste. The simple incineration of waste S. psammophila not only fails to make rational use of calorific value, but also causes serious environmental pollution such as dust, sulfur oxides, and nitrogen oxides. Therefore, it is particularly important to improve the application of waste sand ash resources and realize the “turning waste into treasure” of waste sand ash resources (Nguyen and Nguyen 2019). Salix psammophila contains 36.9% cellulose, 35.0% hemicellulose, 24.8% lignin, a small amount of ash, tannin, and lipids, etc. (Huang 2014). Due to the high cellulose content in S. psammophila, it is often used in pulp and papermaking, chemical raw materials, biomass fuel, and fiberboard.

In the present work, the previously reported isolation of Salix psammophila microcrystalline cellulose (SP-Mic-C), SP-Mic-C was used as raw material to prepare CNC by hydrolyzed with sulfuric acid. Then, TOCNC was prepared by TEMPO/NaBr/NaClO mediated oxidation, and the products were characterized with a view to make subsequent aerogel and hydrogel materials on the basis of this material.

The extraction of cellulose from Salix microcrystalline was based on the method described in a previous paper (Zhong et al. 2020). 10 g S. psammophila was weighed and heated in distilled water at 1:60 g/mL for 1 h at 80 °C. Impurities and some water-soluble components were removed by filtration, and the yield was 87%. The HNO3-C2H5OH solution (1:3 V/V, 1:43 g/mL) was weighed and placed in a three-necked flask, condensed, and refluxed at 90 °C. After the sample was removed, it was washed to neutral with distilled water and anhydrous ethanol and dried at 105 °C with constant weight. After drying, it was added into 7.5 wt% NaClO (1:20 g/mL), adjusted to pH of 3 to 4 with CH3COOH, reacted at 75 °C for 3 h, washed with distilled water and anhydrous ethanol to neutral, and dried at 60 °C to constant weight. The bleached samples were then placed in 10% KOH (1:20 g/mL) solution, magnetically stirred at 75 °C for 2 h, washed to neutral, and dried to constant weight at 60 °C. Finally, 8 wt% HCl solution (1:20 g/mL) was hydrolyzed at 90 ℃ for 1.5 h. The product was successively washed with distilled water and anhydrous ethanol to neutral. After drying, the sample was named SP-Mic-C.

1 g of SP-Mic-C was accurately weighed, and was put into a 20 mL conical flask, with 10 mL of 64 wt% H2SO4 solution, and was stirred at 45 °C for 45 min. Then, the solution was diluted with 900 mL distilled water. It was allowed to stand overnight, and then the supernatant was poured out. A certain amount of distilled water was added again, and this process was repeated 2 to 3 times. A dialysis bag (8000 to 14000 MW) was used for dialysis until the pH was nearly neutral (Ping and Hsieh 2012). The sample was named CNC after freeze-drying, and the yield was about 73.9%.

After stirring at 60 °C for 30 min, 20 mL NaClO solution (10 wt%) was added, and 0.5 M NaOH solution was used to adjust the pH of the solution to 10.0~10.5 until the end of the reaction. Anhydrous ethanol (20 mL) was used to quench the reaction. The solution was dialyzed to neutral and freeze-dried. The sample was named TOCNC with a yield of approximately 21.7%. The TOCNC preparation process is shown in Fig.1.

Scanning electron microscopy (SEM) (Hitachi 4800; Hitachi Limited, Tokyo, Japan) was used to observe the changes of the sample surface during the process from raw material to cellulose. The scanning electron microscope (SEM) was operated at an accelerating voltage of 10 kV. A small number of samples was placed on conductive adhesive. Then they were gold sprayed (Small ion sputtering instrument; Beijing Zhongke Instrument Co., Ltd., Beijing, China), and their morphology was observed.

The test was performed with a Bruker atomic force microscope (Dimension Icon; Bruker Corporation, Madison, WI, USA). A certain amount of nanocellulose was diluted with distilled water and stirred evenly. A drop of nanocellulose suspended liquid was placed on the mica sheet, and the sample with a range of 2 μm × 2 μm. Photoshop CC 2019 (Adobe Systems Incorporated, 2019, State of California, USA) was used to measure and analyze the diameter and length of the nanocellulose.

The FTIR spectra were measured using a Perkin Elmer 65 (Perkin Elmer Instruments Co., Ltd., Waltham, MA, USA). The experimental parameters included a range of 4000 to 600 cm-1. The cumulative number of scans was 32, and the resolution was 1 cm-1.

The TGA experiments were performed on an HCT-1 integrated thermal analyser (Beijing Hengjiu Scientific Instrument Factory, Beijing, China). The samples were analysed in N2 atmosphere with a pressure of 0.3 MPa, a flow rate of 20 mL/min, a heating rate of 10 °C/min, and a temperature range of 25 to approximately 800 °C.

Tests were run in an X-ray diffractometer (Empyrean Alpha-1, Shanghai SIBG Instrument System Co., Ltd., Shanghai, China). Test conditions were the following: Cu Ka radiation at a generator voltage of 40 kV and current of 40 mA; radiation angle for 2θ = 5° to approximately 80°, with a step size of 0.017° and a count time of 4.5 min. The crystallinity index of samples was calculated by the Segal equation (Segal et al. 1959), listed here as Eq. 1,

Figure 2 shows the nanocellulose prepared in this study. The CNC obtained after H2SO4 treatment was milky white. In addition, both nanocellulose solutions were pale blue at very low concentrations, and the dilute suspensions remained stable within a month.

Fig. 2. Morphology (Left, after centrifugal; Right, after freeze drying) of CNC and TOCNC

The SP-Mic-C, CNC, and TOCNC SEM images are shown in Fig. 3. As can be seen from Fig. 3a, SP-Mic-C had a long rod-like structure. SP-Mic-C had been hydrolyzed by H2SO4. The relatively uniform size of particles of CNC is attributed to the rapid hydrolysis of the amorphous cellulose regions by the concentrated sulfuric acid (Fig. 3b). Based on the images shown in the micrographs, the CNC particles appear to have been reunited into a layered structure, such that it was no longer possible to distinguish between single nanorods. Compared with CNC, TOCNC (Fig. 3c) showed a smoother layer surface and exhibited smaller flocs and fault. After TEMPO oxidation treatment of CNC, more hydroxyl and carboxyl groups on the surface of the oxidized nanocellulose enable it to absorb water and swell, and the bloated nanocellulose will form more hydrogen bonds after freeze-drying treatment, resulting in a denser structure.

The atomic force microscope is an instrument for imaging samples using optical lever technology. The method has a good resolution for examination of nanoscale materials. Figure 5(a, b) is the atomic force microscope diagram of CNC and TOCNC, from which it can be seen that both nanocellulose are short rods, which is consistent with the effect shown by TEM, and the image is clearer. From Fig. 5 (a1, a2, b1, b2), which shows length and width distribution of CNC and TOCNC, the average diameter of nanocellulose decreased from 23 nm to 21 nm, and the average length decreased from 213 nm to 165 nm. The experimental data demonstrates that preparation of the TEMPO-oxidized cellulose involved a certain extent of degradation, and the introduction of carboxyl groups also improved the dispersion of the particles.

The TEM method directly examines thin samples with the help of electrons to form an image. It can be seen from Fig. 6 that the CNC had a fine rod-like structure, and after TEMPO-mediated treatment, the diameter and length of TOCNC were slightly lower than those of CNC.

X-ray photoelectron spectroscopy is one of the technical means for qualitative and quantitative analysis of compounds by photoelectric effect (Zheng et al. 2013). Figure 8 shows the XPS analysis curve of CNC and TOCNC. Table 1 shows the relative content ratio of each element in XPS. It can be seen from Table 1 that both groups of samples were composed of a large amount of C, O, and a small amount of sulfur and other elements. The oxygen-carbon ratio changed from 30.79% of CNC to 50.51% of TOCNC. This showed that the TEMPO-oxidation process increased the oxygen-carbon ratio of the sample. The sulfur content in CNC also decreased from 0.61% to 0.32% of TOCNC (Yang et al. 2015), which was attributed to the degradation of cellulose by the alkaline TEMPO/NaBr/NaClO oxidation system. Compared with CNC, the S2P peak of TOCNC was remarkably reduced. The binding energy and chemical shift of the C1S peak on the surface of CNC can explain the change of the sample structure to some extent. Under the influence of electron-withdrawing groups, the density of electron cloud around carbon atom decreases, the shielding effect weakens, and the electron binding energy increases. The three energy spectrum peaks of CNC and TOCNC around 284.8 eV, 286.5 eV, and 288.1 eV correspond to C-C/C-H, C-OH/C-O, and C-O-C, respectively. For TOCNC, a new energy spectral peak is generated at 289.06 eV, which is the peak of C=O in the carboxyl group. Figure 8 (a, d) indicates that the oxidation of nanocellulose gave rise to a carboxyl group.