Garcia-Bedoya, D., Ramírez-Rodríguez, L., Quiroz-Castillo, J., Esquer-Miranda, E., and Castellanos-Moreno, A. (2021). "Caulerpa sertularioides extract as a complexing agent in the synthesis of ZnO and Zn(OH)2 nanoparticles and its effect in the azo dye’s photocatalysis in water," BioResources 16(1), 1548-1560.

Algae constitute a diverse group that is useful in many biotechnological areas. In this paper, the usefulness of Caulerpa sertularioides methanol extract in the synthesis of ZnO and Zn(OH)2 nanoparticles was explored. This work had two main objectives: (1) to use the extract in the synthesis as an organic harmless complexing agent, and (2) to enhance a photocatalytic effect over AZO dyes in wastewater from fabric industries without adding nanomaterial to the environment due to its toxicity. Caulerpa extract performed the expected complexing action, and nanoparticles were formed in a size range from 45 to 69 nm. X-ray diffraction analysis (XRD), transmission electron microscopy (TEM) and UV-Vis spectroscopy were used to characterize the system. It was demonstrated that the nanoparticles were useful to photocatalyst AZO dyes in the water, while contained in tetraethylorthosilicate composites. These could be used in industrial wastewater and are expected to have no environmental consequences because the composites do not add nanoparticles to the water.

Algae constitute a diverse group that is useful in many biotechnological areas. In this paper, the usefulness of Caulerpa sertularioides methanol extract in the synthesis of ZnO and Zn(OH)2 nanoparticles was explored. This work had two main objectives: (1) to use the extract in the synthesis as an organic harmless complexing agent, and (2) to enhance a photocatalytic effect over AZO dyes in wastewater from fabric industries without adding nanomaterial to the environment due to its toxicity. Caulerpa extract performed the expected complexing action, and nanoparticles were formed in a size range from 45 to 69 nm. X-ray diffraction analysis (XRD), transmission electron microscopy (TEM) and UV-Vis spectroscopy were used to characterize the system. It was demonstrated that the nanoparticles were useful to photocatalyst AZO dyes in the water, while contained in tetraethylorthosilicate composites. These could be used in industrial wastewater and are expected to have no environmental consequences because the composites do not add nanoparticles to the water. 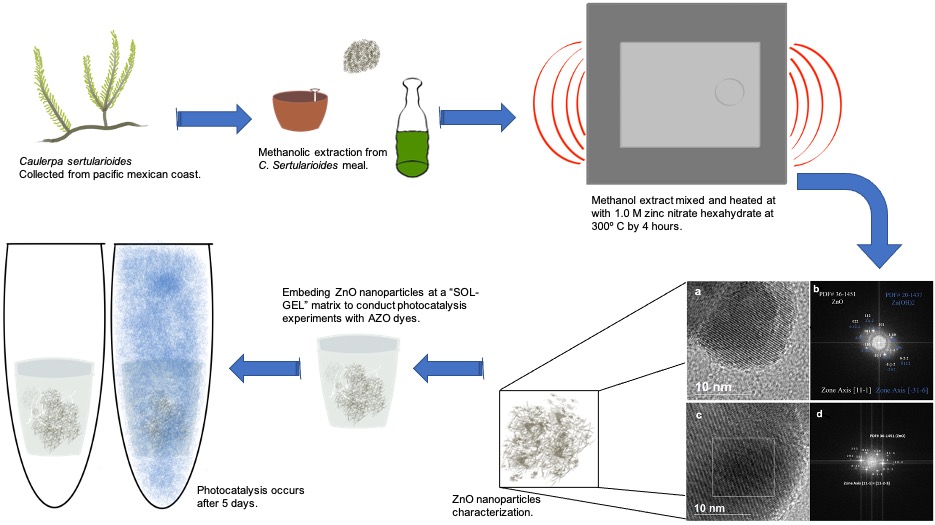 Historically, the fabric industries have used dyes with toxicity issues, i.e., heavy metals such as Hg and Pb, and modern AZO dyes seem to be mutagenic and carcinogenic (Talaiekhozani et al. 2020; Eskandari et al. 2019). At first, this problem was manifested in the people who worked with the dyed materials, and now the problem has been transferred to the water used to pre-wash the fabrics or the clothes made with them (Daneshvar et al. 2008). The water used for dyes and the prewashed discharges must be treated to remove the colorants and leave the water dye-free before sending it to drainage systems or natural environments (Ventura-Camargo and Marin-Morales 2013).

As an option to deal with the colorants problem, ZnO and Zn(OH)2 nanostructured materials have been used to precipitate textile colorants or degrade them by photocatalysis (Xuejing et al. 2009; Bagheri et al. 2020). As some nanoparticles have a negative environmental impact due to possible toxicity, it is also important that nanotechnology proposals offer a way to introduce them to natural systems with the certainty that they will not harm any organism (Simeonidis et al. 2018). A particular trouble with the synthesis of nanoparticles is the use of precursors such as surfactants and complexing agents, which may be hazardous due to their organic origin, for example, thiourea, polyethyleneimine, thioacetamide, and triethanolamine (Knaak et al. 1997; Hajovsky et al. 2012; Oskuee et al. 2018; Chmielewska et al. 2018; Sen et al. 2020). The function of these products is to reduce and complex the metal ions in order to form the particles; these substances donate electrons and form bonds with the metals atoms (Peters 1999).

Some organic substances that offer these characteristics are extracted from the tissues of biological organisms (Sadeghi et al. 2015). Animals, plants, algae, and fungi tissues have metabolites that are reductive, can serve as complexing agents, but are harmless by oral, cutaneous, and respiratory exposure, which are the most frequent routes of intoxication (Gupta and Xie 2018). These metabolites may provide other characteristics to the nanoparticles by adding organic compounds that have many uses (disease treatments, antibiotic functions, etc.) to the nanoparticle surface (Virkutyte and Varma 2013). Algae are an excellent source of metabolites; this taxon is diverse, ranging from unicellular to multicellular forms. The marine group includes Caulerpa sertularioides (S. G. Gmelin), which is an abundant and resistant species that grows in coastal lagoons. With respect to the nanotechnology field, C. sertularioides contains sterols and metabolites that may be useful as reductive and complexing agents (Batley et al. 2013; Esquer-Miranda et al. 2016). In this study we use the C. sertularioides extract as a complexing agent to synthetize Zno and Zn(OH)2 nanoparticles and test its effect in the photocatalysis of an AZO commercial use dye.

The methodology for the algal extraction followed the one proposed in Coronado-Aceves et al. (2016), even in the collection sites provided. Macroalgae meal C. sertularioides was collected in Agiabampo Bay, Sonora (Mexico north-west coast). It was dried in a convection oven at 45 °C for 24 h, milled in a pulverizer, sifted through a 250 mm mesh sieve, and stored at 4 °C until use. Methanol extracts were obtained from 200 g of dried macroalgae meal in 2000 mL of 99.8% methanol. The extractions were performed at room temperature and stirred three times daily for seven days. The extracts were used to prepare nanoparticles.

The chemical analysis of the meals was made on an atomic absorption spectrophotometer (Perkin-Elmer model 3110, Waltham, MA, USA).

Nanoparticles were synthesized by methods adapted from Dobrucka and Dugaszewska (2016) and Sundrarajan et al. (2015). The formulation was performed as follows. 2.5 g of 1.0 M zinc nitrate hexahydrate were mixed with 25 mL of the C. sertularioides’s extract under vigorous stirring for 2 h, maintaining the temperature at 90 °C. After this time, the temperature was reduced to 30 °C until all the liquid (water plus methanol) was evaporated. It formed a green paste. This mass was burned in a muffle furnace at 300 °C for 4 h, producing a white powder.

Due to ZnO nanomaterial’s toxicity, it was necessary to provide a method to maintain nanoparticles away from organisms when used in natural systems. Nanoparticles were encapsulated in a sol-gel matrix constructed with the following method. First, 0.5 g of of ZnO and Zn(OH)2 nanoparticles were suspended in 5 mL of water. The composites were made by mixing with 5 mL of ethanol and 5 mL of Si(OC2H5)4 (tetraethyl orthosilicate, reagent grade, 98%, Sigma-Aldrich, St. Louis, MO, USA ). Then, 1 mL of nitric acid (HNO3) (0.0974 mol) was added to homogenate the mix, in order to accelerate gelation 3 mL of NH4OH (0.0974 mol). The mix was stirred with a vortex (Greish and Brown 2001; Encinas-Romero et al. 2013) (Fig. 1).

Fig. 1. Diagram for the sol-gel embedding method for nanoparticles encapsulation

There were two set of photocatalysis experiments with solar light. These experiments were contained in five 50-mL plastic centrifuge tubes per treatment. The control was deionized water with a commercial dye prepared as recommended by the retailer (1 g/L) (PUTNAM deep blue, “El Caballito”, Mexico, Mexico also known as Naphthol Blue Black). Treatment 1 was Sol Gel without ZnO encapsulation, and treatment 2 was ZnO encapsulated in a Sol-Gel matrix. All were placed on the roof of the Environmental Engineering building at Sonora State University for five days, and they were removed once a day for measurement. Transmittance were measured with a Konica Minolta spectrophotometer (Tokyo, Japan) for aliquots of each experiment treatment tube.

X-ray diffraction results showed that after two independent processes, the synthesis of ZnO and Zn(OH)2 were reproduced by the PDF#36-1451 and PDF#20-1437, respectively, where the ZnO preference directions are (100), (002), (101), (103), (112), and (201). The XRD spectra had a somewhat disarranged appearance. This is a characteristic of an impure material, the material is not pure due to the elements bioaccumulated by the algae and because of the Zn(OH)2 formation, it is important to mention that these impurities were identified (Mukhopadhyay et al. 2015). The results suggested a mainly wurtzite hexagonal arrangement, and this material was consistent with the P63mc space group (Fig. 2).

Deionized water and ethylene glycol were used to suspend the material and measure the UV-Vis spectra and for the TEM; in both cases the results showed that the bandgap was lower than expected. ZnO and Zn(OH)2 must present around 3.37 eV (Hassan and Hashim 2012; Kumar et al. 2012). Using the Tauc method, the bandgap observed was 2.71 eV for the water suspension and 2.77 eV for water and ethylene glycol (Fig. 3). Both fluids were used to suspend the particles because ethylene glycol promotes the nanoparticles formation and could be useful to characterized the material with the TEM.

This variation must be obeyed by other ions impurities such as Pb, Cu, Cd, and Fe, which had been registered in the atomic spectroscopy performed for the meals (Table 1) and in the EDS analysis provided with the TEM micrographics. ZnO nanostructures doped with cooper showed exactly a 2.7 eV bandgap (Tyona et al. 2017). This result is consistent with the Uv-Vis optical resonance (367 nm) for ZnO nanoparticles (Bajpai et al. 2016).

Atomic absorption results showed that meal contained some metals (Table 1) including Cu. This analysis was performed because it is known that Cu and Fe interacts at quantic levels, changing the normal bandgap for the ZnO (Tyona et al. 2017). Copper concentrations were consistent with other Caulerpa species (Huili et al. 2019).

Fig. 3. Uv-Vis spectra and curve used by the Kubelka–Munk model to determine the bandgap energy value

Without encapsulation, all nanoparticles are hazardous to use in environmental matrixes. The size might be small enough to get through membranes and pores of tissues and even cells to show toxicity (Seaton et al. 2010; Maurer-Jones et al. 2013). The “rod” morphology of ZnO it consistent with a polarized growth of the crystal. ZnO is composed of two crystalline planes that form a dipole moment and whose orientation is along the c axis; therefore, ZnO is a polar semiconductor and, due to this property, growth is along the c axis (Xian-Luo et al. 2004), to corroborate this a fast Fourier transformed (FFT) image analysis was performed in water and ethylene glycol samples (Fig. 5).

To corroborate that nanoparticles are not able to enter aquatic life forms, they were encapsulated in tetraethilortosilicate (TEOS) composites, and the UV-Vis spectra were measured in water samples containing composites with and without nanoparticles. As shown in Fig. 6, no particles were added to water during the experiment; the UV-Vis absorption spectra of ZnO and Zn(OH)2 must have sharp peaks from 390 to 494 nm (Zak et al. 2011; Wang et al. 2015). Furthermore, this analysis confirms that TEOS composites are a good method to encapsulate the nanoparticles.

A difference in efficiency was observed between composites with or without nanoparticles. While both treatments end with a 96% of transparency, the composites doped with ZnO nanoparticles cleaned the water a day faster. This may not develop a new cleaning water technology, but it demonstrates that nanoparticles have a positive effect on the treatment of fabric dyes from water. The effect of ZnO nanoparticles coated by SiO2 was already tested to observe their photocatalytic properties with positive results (Zhai et al. 2010). The SiO2 powers the photocatalytic effects due to the Si electronegativity (Wang et al. 2009, 2010). The experiment also reveals that the synthetized materials were both a nanoscale material and a semiconductor, the last due to its photocatalytic effect (Hoffmann et al. 1995).