Although wrinkling is not appreciated in some of its manifestations, there are other instances for which it is essential to study and comprehend various physical phenomena related to wrinkling. Cellulose nanocrystals (CNCs) have some excellent intrinsic properties, i.e., high aspect ratio, percolation function, and good mechanical strength that have potential to affect wrinkling. Since the production period of bacterial cellulose is longer, it is efficient to use CNC as a substitute for bacterial cellulose in such applications. The network structure of bacterial cellulose can be mimicked by CNC fabric, which comprises several wrinkled CNC layers.

Although wrinkling is not appreciated in some of its manifestations, there are other instances for which it is essential to study and comprehend various physical phenomena related to wrinkling. Cellulose nanocrystals (CNCs) have some excellent intrinsic properties, i.e., high aspect ratio, percolation function, and good mechanical strength that have potential to affect wrinkling. Since the production period of bacterial cellulose is longer, it is efficient to use CNC as a substitute for bacterial cellulose in such applications. The network structure of bacterial cellulose can be mimicked by CNC fabric, which comprises several wrinkled CNC layers.

Nano and micro patterns on surfaces have been accomplished by two parallel routes: (i) adapting techniques, including molding and nano- and/or micro-imprinting, and (ii) some novel approaches, such as laser ablation, soft lithography, or laser scanning (Rodríguez-Hernández 2015). Compared to these sophisticated techniques, surface instability can be a simpler way to generate particular patterns on polymer surfaces. 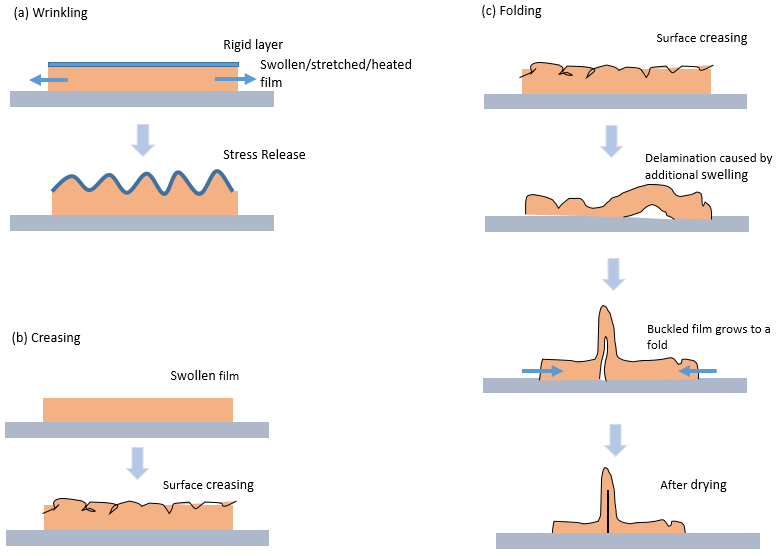 Fig. 1. Schematics of wrinkling (a), creasing (b) and folding (c) produced by mechanical-thermal-osmotic pressures (new drawing inspired by Rodríguez-Hernández 2015)

Thin polymer films may undergo a variety kinds of instability, which may induce surface (i) wrinkling, (ii) creasing, (iii) global buckling, folding, and crumpling modes, and (iv) snapping (Fig. 1). These phenomena are traditionally considered to be flaws in performance, including decreases in mechanical properties and aesthetics, for which there have been many efforts and trials to avoid. However, some novel perspectives have been proposed by which the instability of a polymer can be put to good use in tailoring and modifying the material properties.

When an in-plane compressive stress, which is over the critical stress, is applied to a thin plate, an elastic instability occurs and the surface buckles out of plane (Chen et al. 2014). The length of the buckle is commensurate with the size of plate (Johnston 1983). When a stiff plate is coupled with an elastic substrate, another kind of deformation called wrinkling can occur. The wrinkling instability occurs due to the mismatch strain of the two lays when the bi-layer system is subjected to heating, mechanical stretching, electric field, as well as swelling in a solvent. Wrinkling is an important mechanical phenomenon that generates a periodic pattern across the plate surface. The utilization of wrinkling in applications has been constrained by the limited understanding of the phenomena, as well as the experimental control of them.

A patterned surface can serve as a template to dictate the orientation and growth of colloidal crystals along the specific plane, which is parallel to the substrate. Ordered arrays have been attracting academic attention during the last decades due to their potential applications in some emerging fields, such as nanotechnology (Ferrer et al. 2016). Xia et al. (2003) have demonstrated that polystyrene and silica beads could self-assemble on patterned substrates. Lithographic patterned double-glasses were used as substrates in their work. The patterns were either in the thin films of the bottom surface, or in the surface of Si via anisotropic wet etching. Varghese et al. (2006) studied the deposition of polystyrene particles on patterned surfaces. Unlike Xia’s group, Varghese’s group was using direct laser writing system to create grooves on Su8 photoresist coated glass. Juillerat et al. (2005) deposited gold and silica from their suspension on the patterned surface with ordered arrays.  In their work, poly(methyl methacrylate) (PMMA) coated substrates with high-resolution line/space or hole patterns were prepared with extreme-ultraviolet interference lithography (EUV-IL). A simple, novel, and completely lithography-free assembly strategy was reported by Lu et al. (2007) for directed colloidal crystal assembly on optically transparent substrates. The multilayers, composed of poly(sodium 4-styrene sulfonate) and poly(allylamine hydrochloride), with wrinkles were formed on soft elastomeric polydimethylsiloxane (PDMS) followed with uniaxial deformation. Horn et al. (2009) presented a novel method to align the tobacco mosaic virus (TMV) on topographically structured surfaces. PDMS was used as a template substrate as well in their work. Well defined TMV on wrinkled substrates is an excellent system to study self-assembly of anisotropic colloids on a structured surface. TMV is a kind of rod-like biomolecule.

Cellulose, the most abundant natural, renewable, and biodegradable polymer on earth, is a long chain biopolymer with two glucose molecules bonded via 1-4 beta glucans as the repeating unit. Celluloses naturally assemble into slender rod-shape fibrils. The fibrils comprise two sections according to the degree of cellulose chain orientation. The better-ordered region is surrounded by a less-ordered amorphous region. In the ordered region, the cellulose molecules are well oriented into crystalline arrangement.

CNC and TMV are both rod-like biomolecules. TMV films with pre-defined structure can serve as a specific template for future metallization and mineralization application, as well as a novel model for studying the alignment for anisotropic nanoparticles (Horn et al. 2009). Since CNC has plenty of hydroxyl groups on its surface, the fabricated CNC thin film with wrinkled surface can offer a structured template for functionalization. The CNC emulsion, produced by hydrolyzing cotton with sulfuric acid, can be coated onto a stretch-released PDMS surface via spin-coating technique. Then the CNC thin film is peeled off the PDMS surface, and finally be transferred and stacked together to form a fabric.

Although wrinkling is not appreciated in some cases, in other instances it is essential to study and comprehend various physical phenomena (i.e. wrinkles on human skin and fruit skin) (Genzer et al. 2006). It is also helpful with the modulus measurement of very thin film, which otherwise would be very difficult. The generation of nano- and/or micro-structured polymer film surfaces has been a challenge during recent decades. Patterned thin films are required for various applications, including the fabrication of microchips, and preparation of substrates for cell growth and adhesion, and the absorbent for heavy metal ions.