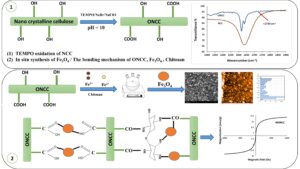 Environmental considerations have led to extensive research and development of organic and natural materials (Lin et al. 2012; Sibaja et al. 2015; Babaei-Ghazvini et al. 2020). Materials based on cellulose polymer are important in this regard (Isogai et al. 2011). Cellulose has been considered as the most abundant biopolymer on the planet. Cellulose has attracted interest due to its interesting properties such as strengthening features, low cost, biodegradability, renewability, environmental friendliness, and versatility (Abe et al. 2007). Different cellulose derivatives have been produced and used. In the derivation, the cellulose structure is modified and the cellulose hydroxyl groups are replaced with other functional groups (Yang et al. 2001; Chen et al. 2006). These processes lead to the production of cellulosic derivatives, which provide a wide range of applications. One of the most important derivatives of cellulose is nanocellulose (Nechyporchuk et al. 2016). There are different types of nanocellulose, each of which differs in size, production method, surface chemistry, and source (Carlsson et al. 2014). In general, nanocellulose is available in two main forms, nanofibrillated cellulose (NFC) and nanocrystalline cellulose (NCC), which differ in their isolation and shape (Wang et al. 2007; Liu et al. 2015; Nechyporchuk et al. 2016; Haniffa et al. 2017; Nypelö 2020). Nanocrystalline cellulose is produced by chemical methods (Xu et al. 2014; Haniffa et al. 2017). Nanocrystalline cellulose is one of the most important natural nano materials due to its environmental compatibility, biodegradability, abundance, high physical strength and stiffness, large surface area, high aspect ratio, and nanometer width (Chen et al. 2011; Dufresne 2012; Zhang et al. 2016; Faradilla et al. 2017; Chen et al. 2020).

Multiple function bio-nanocomposites can be produced for storage of information, magnetic shielding, and security applications of paper through coating NCC and NM bio-nanocomposites on the surface of paper. Nevertheless, the NM acts as a filler in paper and reduces the physical and mechanical properties of paper due to the diminished hydrogen bonding between the fibers (Mo et al. 2017). The mechanical properties can be improved via the selective oxidation process. Functional groups can be replaced on the surface of the NCC through chemical modification (Eyley and Thielemans 2011). Oxidation of cellulose fibers by 2,2,6,6-tetramethylpiperidine-1-oxyl (TEMPO) has been extensively used for chemical modification to introduce sodium carboxyl groups into the cellulose micro fibril surfaces (Habibi et al. 2006; Biliuta and Coseri 2016; Du et al. 2016; Haniffa et al. 2017). TEMPO is a water-soluble chemical catalyst, and TEMPO oxidation is a selective method that is used to oxidize aqueous and non-aqueous polysaccharide solutions. The amount of available carboxyl groups will grow through the oxidation treatment. The selective oxidation reaction changes the carbon 6 of primary hydroxyl groups on the surface of the crystalline cellulose micro fibrils (Saito and Isogai 2004; Puangsin et al. 2013; Meng et al. 2016), where negatively charged carboxyl groups are introduced onto the micro fibrils (Isogai et al. 2011).

In this study, the NCC was oxidized using TEMPO, and the effect of the oxidation process was evaluated on the NCC. Magnetic bio-nanocomposites were produced based on NM, NCC, and oxidized NCC (ONCC). The magnetic bio-nanocomposites were coated on the surface of paper. The effect of the TEMPO oxidation was investigated relative to the magnetization capacity of the coated papers. The results of the oxidation process, the bio-nanocomposite synthesis, and the properties of the coated paper were characterized by scanning electron microscopy (SEM), atomic force microscopy (AFM), Fourier-transform infrared spectroscopy (FTIR), vibrating sample magnetometry (VSM), and X-ray diffraction (XRD).

Preparation of the KFs and handsheet

The KF sheets were soaked in deionized water for 24 h. The kraft pulp was treated mechanically using a laboratory refiner (PFI mill – IDM test, Spain) to a freeness level of 300 CSF. The KF handsheet had a basis weight of 120 g/cm2 and was synthesized according to the TAPPI standard T205 (2002).

The TEMPO-oxidation was performed according to the methods outlined by Habibi et al. (2006). Briefly, 1 g of NCC (based on the dry weight) was soaked in 100 mL of deionized water, after which 15 mg of TEMPO, 165 mg of NaBr (per gram of NCC), and 10 mmol of NaOCl were added to the suspension slowly. The pH of the suspension was elevated to 10 by adding NaOH 0.5 mmol at room temperature. The NCC was oxidized for 2 h. The oxidation was terminated by adding methanol (1 mL), and the pH of the suspension was adjusted to 7 by adding 0.5 M HCl.

Production of the magnetic bio-nanocomposite

The synthesis of the magnetic bio-nanocomposite of NCC (MNCC) and ONCC (MONCC) was performed using the method of Cao et al. (2015). The process was performed for NCC and ONCC. The NCC (1 g) were dispersed in 200 mL of 1.5 wt.% aqueous suspension followed by FeCl2∙4H2O (0.5 g), FeCl3∙6H2O (1 g), chitosan (0.6 g), and epichlorohydrin (2% per the dry weight of the NCC) under a nitrogen flow. Next, NH4OH was added until a pH of 11 was reached under continuous stirring at a temperature of 40 °C for 30 min. Finally, the magnetic fiber was washed with distilled water.

For coating the papers, 1 g of the magnetic bio-nanocomposites was immersed in 20 mL of deionized water. The coating suspension was spread on the surface of the papers with a metal roller. The coated papers were placed on oven at 30 °C and pressurized in plastic frames for 24 h.

Determination of the mechanical paper properties

The carboxyl content of the ONCC was determined according to the methods described by Habibi et al. (2006) using conductimetric titration. 0.05 g of ONCC was added in 15 mL of HCl 0.01 M and stirred for 10 min. Then, the mixture was titrated by NaOH 0.01 M. The amount of carboxyl groups was calculated according to Eq. 1,

The infrared spectra of the NCC and ONCC were measured using a Cary 630 FTIR spectrometer (Agilent Technologies, Santa Clara, CA, USA). The spectra were measured with a spectral width ranging from 600 to 4000 cm-1 at a resolution of 2 cm-1.

The XRD analysis was performed using a Philips X’Pert modular powder diffractometer (MPD) (Almelo, Netherlands). The samples were scanned with Cu Kα = 1.5406 Å radiation at a diffraction angle (2θ) ranging from 5° to 80° with a step size of 1°/min.

Atomic force microscopy was employed to determine the size of the NM and NCC particles. The AFM analysis was performed via an Easyscan2 Flex AFM probe microscope (Nanosurf, Liestal, Switzerland) in air.

The morphology of the NM particles and the coated papers was examined via SEM analysis. The SEM micrographs of the samples were taken using an SNE-4500 scanning electron microscope (SEC, Suwon, Korea). The samples were covered with a thin layer of gold via sputtering. The EDX analysis was used to determine the chemical composition analysis and the elemental mapping was conducted with the SNE-4500 electron microscope equipped with an EDX system. The operating voltage was 30 kV.

The magnetization of the samples was measured via VSM using a Meghnatic Daghigh Kavir company device (Kashan, Iran) in an applied magnetic field sweeping between ±10000 Oe.

FTIR of the TEMPO-Oxidized NCC

Fig. 1. The FTIR spectra of the NCC and ONCC samples

Table. 1. Conductimetry and Carboxyl Contents of the NCC, MNCC and MONCC

The surface morphology and particle size of the magnetite nanoparticles, the fibers, and the magnetic fibers were observed via AFM and SEM micrographs. Figure 2a illustrates the SEM micrograph of the NM. The cubic shape of the NM particles may be because of the accumulation of particles (Rezanezhad et al. 2022).

Strength Properties of the Coated Papers by Magnetic Bio-Nanocomposites

The tensile and tear strengths of the control (kraft paper) and coated papers were investigated. The diagrams of the tensile and tear index values can be seen in Fig. 4. The tensile and tear index diagrams indicated that the control paper had the highest strength. However, the paper strength diminished substantially after it was coated with magnetic bio-nanocomposites. The NM functions as a filler in the paper structure and reduces the strength of the paper. The reaction sites increased due to the TEMPO oxidation, which introduced carboxyl groups onto the NCC. As a result, the bonding between the fibers increased and the strength of the paper increased. The strength of the coated papers increased due to the mechanical interaction between the magnetic bio-nanocomposite and the fibers on the surface of paper. This formed hydrogen and covalent bonding between the coating compositions such as the NCC, NM, chitosan, and the hydroxyl groups of the fiber surface.

Fig. 4. Tensile and tear index values of the control and coated paper by magnetic bio-nanocomposites

Fig. 5. The a) apparent density and b) air resistance and water absorption values of the control and coated papers

One of the disadvantages of paper is its low water resistance, which may interfere with some of its applications, such as in insulating papers and oil absorption in printing. As a result, it is essential to control the water absorption of paper. According to the results, the highest and lowest water absorption values were related to the uncoated sample (control) and the paper coated with the ONCC magnetic bio-nanocomposite, respectively. In a paper network, water molecules are absorbed by the fibers as well as the inter-fiber empty space. Coating of composites impregnate the paper structure and fill the pores to form a layer on the surface of the paper. The oxidation process increases the carboxyl groups and enhances the reactivity between the fibers and the ONCC magnetic bio-nanocomposite. The oxidation process also boosts the bonding, thereby reducing the reactive points that can react with the water molecules. The contact angle of water droplets with the paper surface increased due to the coating with magnetic bio-nanocomposite. Therefore, the surface of paper tends to be hydrophobic (Marvizadeh et al. 2017). Water molecules bond with hydroxyl and carboxyl groups introduced by oxidation and reduce the water absorption capacity.

The magnetic behavior of the samples was investigated via vibrating sample magnetometry at room temperature. Figure 7 indicates the saturation of magnetization (Ms) of the NM, the NCC, the paper coated with the NCC magnetic bio-nanocomposite, and the ONCC magnetic bio-nanocomposite. The Ms values for the NM, NCC, paper coated with NCC magnetic bio-nanocomposite, and ONCC magnetic bio-nanocomposite were 23, 0.12, 10.9, and 14.57 emu/g, respectively. The Ms values of the MNCC and MONCC were both lower compared to the NM particles, because of the reduction in the content of the NM loaded onto the fiber. Furthermore, the Ms increased in the TEMPO-oxidized NCC. The reactivity of the NCC after the oxidation treatment was high due to the carboxyl functional groups in its structure. Carboxyl groups act as a linkage point for Fe3O4 and hydroxyl groups in the cellulose chain (Biliuta and Coseri 2016). The Fe3+ and Fe2+ are absorbed onto the NCC due to the negative charge of carboxyl group in NCC. As a result, the Ms increased due to the rise in the content of iron salts absorbed onto the NCC. The samples exhibited superparamagnetic behavior, as conﬁrmed by the absence of coercivity (Hc), remanence (Mr), and the ferromagnetic behavior (Xiong et al. 2013; Biliuta and Coseri 2016).

The authors are grateful to the Sari Agricultural Science and Natural Resources University for providing equipment support.