Extracts from the inner stem bark of Berberis vulgaris were analyzed for their antioxidant activity using the 1,1-dipheny-2-picrylhydrazyl (DPPH) method and compared with ascorbic acid (AA) and butylated hydroxytoluene (BHT). The most active extracts were analyzed for their chemical composition using gas chromatography-mass spectrometry. Acetone extract was found to be the most active as an antioxidant agent at 98.61%, which was higher than the value of vitamin C (93.03%) at the concentration of 0.16 mg/mL. The major components identified in the acetone extract were tetracosanoic acid, methyl ester (26.36%), followed by phthalic acid, diisooctyl ester (20.93%), 1,2-bis(trimethylsiloxy) ethane (10.26%), and 1,2-benzendicarboxylic acid, diisononyl ester (8.70%). The dissolved water:methanol (1:1 v/v) partitioned from acetone extract afforded 12 fractions; among them, fraction F11 was found to have good antioxidant activity (95.41%) at the concentration of 0.16 mg/mL. The major compounds identified in F11 were N-methyl-4-(hydroxybenzyl)-1,2,3,4-tetrahydroisoquinoloine (28.82%), 9-α-hydroxy-17β-(trimethylsilyl-oxy)-4-anderostene-3-methyloxime (13.97%), ribitol, pentaacetate (9.76%), 1-methyl-4-[4,5-dihydroxyphenyl]-hexahydropyridine (6.83%), and 2-ethylacridine (4.77%).

Extracts from the inner stem bark of Berberis vulgaris were analyzed for their antioxidant activity using the 1,1-dipheny-2-picrylhydrazyl (DPPH) method and compared with ascorbic acid (AA) and butylated hydroxytoluene (BHT). The most active extracts were analyzed for their chemical composition using gas chromatography-mass spectrometry. Acetone extract was found to be the most active as an antioxidant agent at 98.61%, which was higher than the value of vitamin C (93.03%) at the concentration of 0.16 mg/mL. The major components identified in the acetone extract were tetracosanoic acid, methyl ester (26.36%), followed by phthalic acid, diisooctyl ester (20.93%), 1,2-bis(trimethylsiloxy) ethane (10.26%), and 1,2-benzendicarboxylic acid, diisononyl ester (8.70%). The dissolved water:methanol (1:1 v/v) partitioned from acetone extract afforded 12 fractions; among them, fraction F11 was found to have good antioxidant activity (95.41%) at the concentration of 0.16 mg/mL. The major compounds identified in F11 were N-methyl-4-(hydroxybenzyl)-1,2,3,4-tetrahydroisoquinoloine (28.82%), 9-α-hydroxy-17β-(trimethylsilyl-oxy)-4-anderostene-3-methyloxime (13.97%), ribitol, pentaacetate (9.76%), 1-methyl-4-[4,5-dihydroxyphenyl]-hexahydropyridine (6.83%), and 2-ethylacridine (4.77%).

The barberry (Berberis vulgaris L., family Berberidaceae) plant grows in Asia and Europe. Various parts of this plant, including the roots, bark, leaves, and fruit, have been used extensively for medicinal purposes and are known for possessing antiarrhythmic and sedative effects in Iranian traditional medicine (Fatehi et al. 2005; Javadzadeh and Fallah 2012). B. vulgaris was macerated along with Foeniculum vulgare in Ancient Egypt to ward off pestilent fevers (Chevallier 2001), and was also used in Catawba for peptic ulcer disease.

The pharmacological, biochemical, and anti-cancer effects of berberine (isoquinoline alkaloid present in roots, rhizome, and outer bark) were reported in several studies concerning the importance of medicinal plant species in the Berberis genus (B. aquifolium, B. vulgaris, B. aristata, etc.) (Marinova et al. 2000; Kim et al. 2003; Mahata et al. 2011; Wu et al. 2011). Based on previous reports, the majority of the medical and toxic properties of barberries are related to the different alkaloids existing in the different parts of the plant (Končić et al. 2010; Javadzadeh and Fallah 2012). Barberry crude extract and the active alkaloid, berberine, have been promising for the treatment of hepatic oxidative stress, Alzheimer’s disease, and idiopathic male factor infertility (Abd El-Wahab et al. 2013). The ethanolic extract of dried powdery roots can be regarded as non-toxic, as it does not inhibit the growth of normal peripheral blood mononuclear cells that can induce cancer cells (Abd El-Wahab et al. 2013). Anthocyanins and barberry fruit extract have been found to have inhibitory effects on capillary permeability (Cohen-Boulakia et al. 2000) and epidermal growth factor (Meiers et al. 2001), as well as anticholinergic and antihistaminergic effects (Tomosaka et al. 2008).

To the best of our knowledge, there have been no reports on the chemical composition of the inner bark of the B. vulgaris stem extract. However, the chemical composition of this part has been reported. Previous phytochemical analyses of the root or stem bark extract of B. vulgaris has yielded the presence of protoberberines, bisbenzyl-isoquinoline alkaloids (berbamine, tetrandrine, chondocurine berberine, (-)-tejedine, jatrorrhizine, columbamine, berberubine, oxicanthine, palmatine, vitamin C, resin, and tannins), and flavonoids (quercetin and kaempferol) (Akhtar et al. 1978; Akhter et al. 1979; Dewick 1993; Ivanovska and Philipov 1996; Suau et al. 1998; Fatehi et al. 2005; Damaschin and Analiza 2006; Aghbashlo et al. 2008). Therefore, this novel approach investigated the antioxidant activity of some extracts, as well as the fractions of the stem inner bark extracts of B. vulgaris and compared them with ascorbic acid (AA) and butylated hydroxytoluene (BHT). The most active extract was analyzed for its chemical composition using gas chromatography-mass spectrometry (GC/MS).

Fresh stems of B. vulgaris were collected from Siahbishe, Chalous, and Mazandaran, Iran in May of 2013. The plant material was identified by Khosrow Ashrafi, Assistant Professor, Department of Wood Science and Paper Technology, Karaj Branch, Islamic Azad University, Karaj, Iran, and a voucher specimen was deposited in the Herbarium College of Agricultural and Natural Resources, Karaj Branch, Islamic Azad University, Karaj, Iran. The inner bark was separated from the stems and air-dried to achieve an 8.0% moisture content.

The inner bark of stems were cut into small pieces and chopped using a laboratory electrical rotary mill to obtain bark flour. The flour size was between 40 and 60 mesh. Approximately 50 g of this flour was placed into the 5 extraction thimbles, and then five independent extracted using pure acetone (300 mL in a 500-mL balloon) and a Soxhlet-type apparatus for 8 h. The combined extract was concentrated using a Heidolph Laborota 4001 rotary-evaporator apparatus (at 40 °C to reach total solvent evaporation) for approximately 15 min. Then, the extracts were collected, dried over anhydrous sodium sulphate, and stored at 4 °C until further analysis. The solid extractive weight was 2.72 g. Subsequently, 2.0 g of the solid extractives were dissolved in water:methanol (1:1 v/v) where the marc or the residue was discarded then the supernatant poured into a separatory funnel, followed by the addition 50 mL of n-hexane. The mixture was shaken by hand for 10 min. Half a gram of the water:methanol aqueous supernatant extractive was used for column chromatography with silica gel, Merck KGaA 64271 Darmstadt, Germany. The 12 fractions were labeled F1 to F12 (Fig. 1). The 3 × 10 mL eluent volume was used in the chromatographic separation for each solvent.

Fig. 1. Isolation scheme of active constituents of B. vulgaris from the water:methanol extract of inner stem bark.

The free radical scavenging activities of the acetone and water:methanol extracts, as well as the fractions from F1 to F12 of the stem inner bark powders, were determined using the 1,1-dipheny-2-picrylhydrazyl (DPPH) method (Karau et al. 2013). For this method, a stock solution was prepared by dissolving 2.4 mg of DPPH free radical in 100 mL of methanol. The stock solution was stored at 20 °C. The working solution was prepared by diluting the DPPH stock solution with methanol. Then, 1250 μL of the working solution was combined with 250 μL of the methanol extract from the medicinal plant (1 mg/mL). Serial dilutions were carried out with the stock solutions (1 mg/mL) of tested extract to obtain concentrations of 0.005, 0.01, 0.02, 0.04, 0.08, and 0.16 mg/mL. The experiment was performed in triplicates, and the average absorbance was recorded for each concentration. The reaction mixture was mixed for 10 s and left to stand at room temperature in a dark place for 30 min. The absorbance was measured at 517 nm, using a UV scanning spectrophotometer. Ascorbic acid (AA) and butylated hydroxytoluene (BHT) were used as the reference standards and were dissolved in methanol to make the stock solutions with the same concentration (1 mg/mL). The control samples were prepared with the same volume of solution, without test compounds and the referenced standards. Pure methanol (Sigma-Aldrich, Germany) was used as a blank. The DPPH free radical scavenging activity (%) was calculated using the following equation,

where the percentage inhibition value was calculated from the absorbance of the control, Ac, and of the sample, As.

The controls contained all the reaction reagents except the extract or positive control substance. The values are presented as the means of triplicate analyses.

Statistically, there were significant differences among the treatments (F1→F12, water:methanol, acetone, BHT, vitamin C, and their concentrations (Tables 1 and 2).

Previously, the hexane fraction of the crude methanol extract from the shade dried plant material was the most active fraction, with an IC50 of 72 μg/mL (Kolář et al. 2010), in the case of inhibition with acetylcholinesterase. Berberine and methanolic barberry crude extract showed a significant reduction in their antioxidant abilities and radicals scavenging effects, especially on hydroxyl and DPPH radicals (El-Sayed et al. 2011). Furthermore, B. vulgaris extract, as well as berberine chloride, inhibited DPPH oxidation in the range of 13 to 46% more than control level (Abd El-Wahab et al. 2013).

Leaves, fruit, and stem extracts of B. vulgaris were reported as being active in the DPPH radical-scavenging assay, but the active constituents involved were not determined (Heinrich et al. 2005). However, Cannabisin G and (±)–lyoniresinol were responsible for the antioxidant activity of B. vulgaris root bark extract (Tomosaka et al. 2008).

Table 1. Statistical Analysis of the Effect of Treatments and Concentrations on the Antioxidant Activity of Inner Bark Extractives of B. vulgaris

Table 2. Mean±SD of the Antioxidant Activity (%) as Affected by Different Treatments of Inner Bark Extractives of B. vulgaris and Comparing them with BHT and Vitamin C 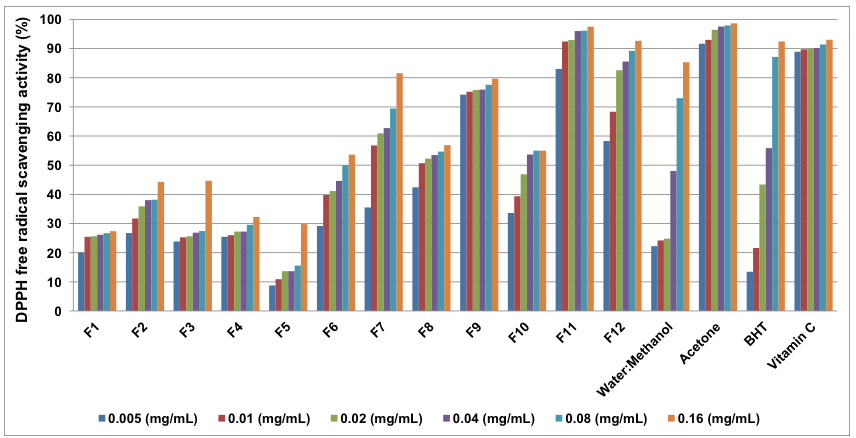 Fig. 2. The antioxidant activity of extracts from the inner bark of B. vulgaris

The suggestable chemical constituents identified in the acetone extract are presented in Table 3. The acetone extract of the fresh stem inner bark of B. vulgaris exhibited a yellowish extract with a pleasant aroma, and a yield of 8.0% (v/w). Ten components, comprising 100% of the inner bark extract, were identified. The major components of the inner bark extract were tetracosanoic acid, methyl ester (26.36%), phthalic acid, diisooctyl ester (20.93%), 1,2-bis(trimethylsiloxy)ethane (10.26%), and 1,2-benzenedicarboxylic acid, diisononyl ester (8.70%). Among the identified components, three of the components comprising 55.99% of the extract were fatty acids (aliphatic compounds), others included: sesquiterpene (5.22%) two aromatic amines (8.36%), benzoxepine derivatives (7.04%), oxetane compounds (6.80%), ammoxidized hydroquinone derivatives (10.26%), and ketone compound (6.34%).

Analyses of the extract showed that predominantly volatile organic compounds in the form of fatty acid esters were found. Two-(4-methylphenyl)-3-(1-hydroxyhexyl) oxetane is an oxetane derivative that is used in medicinal chemistry. Early studies in rats involving 3,3‐diethyloxetane and other simple oxetanes revealed their anesthetic, sedative, and anticonvulsant properties (Wuitschik 2008). For the coptidis, the use of an alternative biosynthesis route with proline, phenylalanine, catechollactate, and 2-mono-isobutyrin was proposed to synthesize its major bioactive alkaloids. It was observed that different fatty acids might be needed to modulate the biosynthesis of the bioactive secondary metabolites of medicinal herbs (Teo et al. 2011).

In addition, sesquiterpene, epi-ligulyl oxide, and derivatives from ammoxidized hydroquinone, i.e., 1,2-bis(trimethylsiloxy)ethane, were detected in barberry bark extracts for the first time. The epi-ligulyl oxide compound has been characterized in agarwood and eaglewood oil as a novel compound (Naf et al. 1992; Mei et al. 2008).

The suggestable chemical constituents identified in F11 are presented in Table 4. The major compounds were N-methyl-4-(o-hydroxybenzyl)-1,2,3,4-tetrahydroiso-quinoline (28.82%), 9-α-hydroxy-17β-(trimethylsilyloxy)-4-androstene-3-methyloxime (13.97%), ribitol, pentaacetate (9.76%), 1-methyl-4-[4,5-dihydroxyphenyl]-hexahydro-pyridine (6.83%), and 2-ethylacridine (4.77%). Most of the identified compounds were derived from isoquinoline alkaloids and one compound (ribitol, pentaacetate) was derived from carbohydrates.

The alkaloid fraction has been found in some species of Berberis in both the stem and bark ethanolic extracts (Rocha et al. 2005). In the review article by Imanshahidi and Hosseinzadeh (2008), the most important constituents found in the stem bark of the plant were the isoquinoline alkaloids, acanthine, berbamine, berberine, columbamine, jatrorrhizine, and magnoflorine. Berberine and berbamine are the most biologically active compounds and are widely distributed in almost all Berberis species (Gorval and Grishkovets 1999; Dev 2006; Rashmi et al. 2008).

The authors are grateful to the Islamic Azad University, Karaj Branch for their financial support of the project. The authors would like to thank Dr. Irani, Dr. Ghare-vaysi, Dr. Mirabi, and Mr. Miri (Research of Islamic Azad University, Ghaemshahr Branch) for the use of their laboratory equipment, and special thanks to Mrs. Azimi (operator of GC/MS apparatus) for helping with the injection of test samples.

Chevallier, A. (2001). The Encyclopedia of Medicinal Plants: A Practical Reference Guide to More Than 550 Key Medical Plants & Their Uses, Reader’s Digest, Pleasantville, NY.