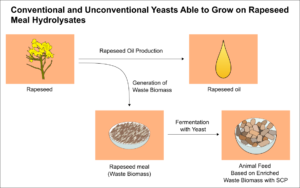 The by-product from the production of rapeseed oils is pomace (sometimes referred to as oil cake or rapeseed meal). Currently, the most important application of pomace is for the production of animal feed. Rapeseed meal is a good source of nutritional components, with a high content of methionine and lower content of lysine and isoleucine. Lysine is one of the most important amino acids and is a growth-limiting factor. In comparison to soybean meal, the essential amino acids present in rapeseed meals show lower digestibility. Rapeseed meal contains about 31.6% of neutral detergent fiber, which is about three times more than soybean meal (10.5%). Rapeseed oil contains far more acid detergent fiber (20.7% vs. 5.7%) and lignin (9.7% vs. 0.4% of dry matter) than soybean meal (Table 5). The digestibility of lignin is limited, and this can affect the digestive tract, energy release, and animal growth. In broiler production, excessive ingestion of rapeseed meal produces an off-fishy flavor in eggs. Another problem is increased cases of liver hemorrhaging. Rapeseed meal contains many anti-nutritional substances, such as glucosinolates, phytates, erucic acid, and alkaloids (Bau et al. 1994; Mandiki et al. 2002). Generally, glucosinolates are not toxic. However, their derivatives can have side effects on the liver, kidneys, and thyroid. Damage to the thyroid gland occurs via disturbance of iodine metabolism (Grubb and Abel 2006; Yasumoto et al. 2010). Another anti-nutritional substance is phytic acid. This antioxidant binds with macro elements, such as iron, calcium, magnesium, sodium, and potassium, which are necessary for the health of humans and animals (Thompson 1990). Therefore, the use of rapeseed meal directly in animal nutrition must be limited. Acceptable levels of rapeseed meal in boiler feed range from 5% to 20%, depending on the glucosinolate concentration (Paciorek-Sadowska et al. 2019). New technologies are sought to enrich rapeseed meal with higher doses of proteins.

A new avenue for both increasing the nutritional value of oil cake and managing waste rapeseed material is the production of single cell protein (SCP) for use as animal feed. Through selective use of microorganisms for fermentation, it is possible to increase the nutritional value of waste biomass and enrich its amino acid profile (Fenwick and Curtis 1980; Ritala et al. 2017; Weindl et al. 2018; Górka and Penner 2020). Yeast cells can be used as a protein supplement in animal feed. They provide good nutritional value. This type of protein is inexpensive and competitive with other protein sources. In addition to the high protein content, which ranges between 60% and 82%, yeast SCP contains fats, carbohydrates, vitamins, and minerals. It is also rich in essential amino acids, such as lysine and methionine. Many yeasts are possible sources of SCP, including the genera of non-conventional yeasts (except classical Saccharomyces cerevisiae): Candida, Cryptococcus, Hansenula, Lipomyces, Pichia, Rhodotorula, Torulpsis, Yarrowia, etc. Suitable yeasts are non-pathogenic strains, capable of synthesizing high yields of protein acceptable as feed. High growth rates should not require special conditions and should be obtained in inexpensive agricultural media (Obaida 2021).

This study compared various non-conventional yeasts as candidates for efficient SCP production in different rapeseed meal media after enzymatic hydrolysis. The study is a part of a research project with the aim of developing an animal feed enriched with microbial protein, based on waste biomass from the agro-food industry. The results will enable determination of the proper yeast strain for application in the SCP production process.

The aim of this study was to investigate the effect of different portions of rapeseed meal on the growth of yeast.

The enzyme dose required to perform enzymatic hydrolysis was calculated based on the dry matter content. The optimal enzyme dose was determined from the liquefaction level (0.5 mL, 0.25 mL, and 0.125 mL per 10 g of dry mass). Pre-hydrolysis was performed for 4 h at 50 °C. However, the enzymes were not deactivated, and simultaneous saccharification and fermentation (SSF) occurred.

Following hydrolysis, 0.3 g of ammonium sulfate was added to each sample as a mineral nitrogen source. Inoculation was performed with 2- to 5-day yeast cultures. From each strain, 1 mL of culture suspension was transferred to the previously prepared samples. Each of the flasks was placed on a shaker for 48 h, at room temperature with a shaking speed of 200 to 300 rpm, depending on the density of the flask content.

where LL is the liquefaction level (%), Δm is the difference in the sample mass before and after hydrolysis (g), and M is the primary sample mass (g).

The monosaccharide profiles of the obtained yeast lysates were analyzed using a UV-spectrophotometer (Thermo Scientific Multiskan GO; Thermo Fisher Scientific, Munich, Germany). Tests were carried out with Megazyme K-ARGA (l-arabinose, d-galactose), K-XYLOSE (d-xylose), K-MANGL (d-mannose, d-fructose, d-glucose) Kits (Bray, Ireland). The assays were conducted according to the manufacturer’s instructions and as described in the literature (Berłowska et al. 2017). The content of sugars was compared before and after pre-hydrolysis.

Dilutions were performed on each flask for subsequent analysis by the plate count method. Petri dishes were incubated for 48 h at 30 °C. The numbers of colony-forming units per 1 mL were determined for each of the tested strains at the beginning and end of the bioprocess. Based on the results, microbial growth was calculated in CFU/mL according to the following formula,

where Δ log N is microbial growth presented on a logarithmic scale, NA is the number of colony-forming units after 48 h of incubation (cfu/mL), and NI is inoculum density (cfu/mL).

The free amino acids were extracted using hydrochloric acid. Simultaneously, nitrogenous molecules were precipitated with sulfosalicylic acid and eliminated throughout filtration. The filtrate was acidified to pH 2.2. Next, the amino acids were separated by ion exchange chromatography (Shimadzu Corporation, Kyoto, Japan) and identified by reaction with ninhydrin and photometric detection at a wavelength of 570 nm. For proline detection, the wavelength was changed to 440 nm (EC 2009).

The results from three independent experiments were averaged, and the standard deviation (SD) was calculated in Microsoft Excel. In the same program, a one-way analysis of variance (ANOVA) and t-test were performed (Microsoft Excel, Microsoft®, v16.0.14827.20028, Redmond, WA, USA).

Table 2 presents the content of carbohydrates in the rapeseed meal samples before and after hydrolysis.

However, the results of sugar determination do not reflect the actual concentrations of sugars during fermentation. The application of SSF leads to continuous hydrolysis of the substrate and the gradual release of simple sugars, which are subsequently consumed by yeasts (Szambelan et al. 2018).

Table 2. Content of Carbohydrates in Rapeseed Meal Samples Before and After Hydrolysis

All the tested yeast strains showed the ability to grow on the tested rapeseed meal hydrolysates (Table 4). The highest yeast growth rate was observed on 10 g of rapeseed meal (Δ log N ranged from 0.92 to 2.91 logarithmic units). Yeast growth with 10 g of rapeseed meal was highest for the strain Yarrowia lipolytica ŁOCK0264 (2.91 logarithmic units). The lowest yeast growth was observed for the strain Candida humicola ŁOCK0013 (0.92 logarithmic units). Saccharomyces strains are capable of metabolizing hexoses, which enables them to grow on rapeseed meal. When combining with strains capable of processing pentoses, they are able to completely utilize carbohydrates present in rapeseed waste (Tomás et al. 2013). Yarrowia lipolytica is an oleaginous yeast, capable of the internal accumulation of up to 20% w/w lipids and with high adaptability to various environmental conditions, which may stimulate its growth in rapeseed meal hydrolysate as a culture medium (Carsanba et al. 2018; Patsios et al. 2020). Metschnikowia pulcherrima is also capable of growing on rapeseed meal-based media. It is able to easily metabolize the fiber structure of rapeseed to make it fit for animal consumption (Santomauro et al. 2018). Scheffersomyces stipitis is adapted to the presence of hemicellulose, a biopolymer that appears in most plants, especially rapeseed. These results were thus consistent with data published in the literature (Nigam 2001). Kluyveromyces marxianus can be used for modification of fiber present in rapeseed. According to Wang et al. (2020), this yeast strain can be used to modify insoluble dietary fiber, increasing its possible uses as a functional ingredient. Candida utilis is characterized by the ability to increase protein content.

However, it is not efficient at consuming glucosinolates (Wang et al. 2012). Strains with multiplication efficiency exceeding 100% were chosen for further analysis. Candida humicola was also included to test its multiplication efficiency with higher doses of biomass. The selected yeast strains were cultivated with larger portions of hydrolyzed rapeseed meal. The results of CFU measurements are presented in Table 5.

The highest yeast growth in the 12.5% rapeseed meal hydrolysates was noted for Metschnikowia pulcherrima NCYC747 (3.5 × 108/mL). The lowest yeast growth was noted for Kluyveromyces marxianus ŁOCK0024 (8.3 × 106/mL). Yeast growth on the 15% hydrolysates was also the highest for the Metschnikowia pulcherrima NCYC747 strain (CFU 4.5 × 108/mL). It was lowest for Saccharomyces bayanus BC S103 (1.0 × 108/mL). To compare microbial growth on media with different waste concentrations, multiplication efficiency was calculated (Fig. 1).

Inhibitory compounds present in rapeseed meal can have a negative effect on yeast growth. Rapeseed meal contains antinutritional compounds including glucosinolates, sinapine, sinapic acid, tannin, phytic acid, and crude fiber (Dingyuan et al. 2007). According to the literature, glucosinolates decrease the microbial growth of fungi (Calmes et al. 2015). The phenolic derivatives sinapine and sinapic acid are capable of reducing yeast growth (Câmara et al. 2019). Similar reduction of yeast growth has been noticed for tannins (Ishida et al. 2006). There is currently no data on the direct influence of antinutritional compounds on the tested yeast species. This may be the focus of future work.

The highest multiplication rate in the presence of 10% of hydrolyzed waste material was noted for Yarrowia lipolytica (2.91 logarithmic units). Supplementation of larger biomass portions of substrate led to improvement of microbial growth expressed in logarithmic units for Metschnikowia pulcherrima NCYC747 (2.86 logarithmic units). The lowest microbial growth among all the tested strains was observed for Candida humicola ŁOCK0013. Increasing the concentration of waste material led to lower growth of all four tested strains: Saccharomyces bayanus, Yarrowia lipolytica, Kluyveromyces marxianus, and Scheffersomyces stipitis. This effect was especially noticeable for Yarrowia lipolytica. However, two tested strains, Metschnikowia pulcherrima and Candida humicola, were characterized by good adaptation to higher rapeseed meal concentrations. Metschnikowia pulcherrima is usually isolated from fruits or vegetables, and can be used as SCP producers in waste biomass valorization (Abeln et al. 2020; Němcová et al. 2021). This strain was characterized by a wide spectrum of enzymatic activity. In addition, Metschnikowia pulcherrima showed strong biocontrol activity against various microorganisms (Pawlikowska et al. 2019). This quality may be an added advantage for SCP production in waste plant materials. In turn, C. humicola is known for its high proteolytic activity, which may contribute to produce SCP with better feed qualities (Ray et al. 1992).

Yeasts are among the most important groups of biotechnological microorganisms. The traditional industrial attributes of classical yeasts include primary roles in the fermentation of various foods, such as beers, cider, wines, and bakery products. More recently, non-Saccharomyces yeasts have been considered as industrial organisms for a variety of biotechnological roles, including SCP production (Johnson 2013). Their good adaptation abilities, wide spectra of enzymatic activity, assimilation profiles, and biocontrol features make them suitable candidates for use in SCP production from rapeseed meal.

In this study, hydrolyzed rapeseed meal was shown to be a suitable feedstock for both conventional and unconventional yeasts. The results pave the way for future research on (1) the valorization of waste biomass with the use of selected yeast and carefully chosen mixed populations; (2) techno-economic analysis of microbial protein production on a larger scale.

The authors are grateful for the support of Wojewodzki Fundusz Ochrony Srodowiska i Gospodarki Wodnej w Lodzi (Grant no. 157/BN/D/2020).