Design of bamboo cutting mechanism based on crack propagation principle

Design of Bamboo Cutting Mechanism Based on Crack Propagation Principle 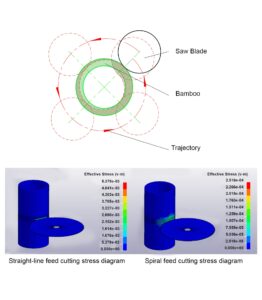 Most of the bamboo in the world is distributed in Asia. Bamboo products have a variety of applications, and there are huge differences in the harvesting and application of bamboo (Zhang 1994). Bamboo is prone to splitting problems during harvesting, and the growth environment of bamboo is often complicated, so it is difficult for large machines to enter.

Most of the existing equipment for bamboo harvesting has only one direction of feed. For example, a charged reciprocating saw for bamboo cutting can reduce the work intensity of direct cutting with a machete; however, it is particularly easy to cause bamboo splitting (Yang et al. 2013). Zhou et al. (2018) designed a combined forest harvester, which integrates multiple functions, but it is large in size and difficult to adapt to complex terrain. Yang et al. (2019) designed a new type of V-shaped double cylindrical milling cutter for bamboo harvesting, but its efficiency is low, and it is easy to tear the bamboo skin. Li et al. (2020) designed a handheld bamboo forest harvester, which improves the efficiency of harvesting, but it will have insufficient power and easily cause bamboo splitting. The above harvesting methods reduce the labor, but they cannot effectively solve the problem of bamboo splitting in the harvesting process. The present study focused on the principle of bamboo crack propagation. A new cutting method was studied and analyzed. The influence of different cutting parameters on cutting force and power was considered and optimized to verify that this cutting method can effectively reduce the splitting problem in the harvesting process of bamboo. Finally, a specific structure of the cutting mechanism was designed based on this and conducted a preliminary verification.

Bamboo mainly refers to the bamboo culm, which is mainly composed of bamboo outer skin, bamboo inner skin, bamboo meat, and other parts (Yang et al. 2006). The diameter at breast height of bamboo is primarily 8 to 12 cm, the maximum diameter can reach 20 cm, and its maximum wall thickness can reach 15 mm. The moisture content and elastic modulus of bamboo are important indexes that affect cutting, in addition to the hardness of the skin. These parameters are related to bamboo age and bamboo cutting position. The older the bamboo, the smaller is its moisture content and elastic modulus. The bamboos selected for harvesting are older and prone to splitting during cutting. Therefore, the splitting problem needs to be solved when designing the harvesting mechanism.

In order to verify the effect of various cutting methods on bamboo splitting, the fracture property of bamboo was analyzed. The crack modes of the material are shown in Fig. 1. There are three modes of crack: Mode I cracks are open type, mode II are cut type, and mode III are tear type cracks. Due to the organizational structure of bamboo, its main crack mode is mode I (Wang et al. 2007). That is, bamboo splits mainly under the tensile stress perpendicular to the crack surface.

where σ is the tensile stress perpendicular to the crack surface (MPa), a is the initial crack length (mm), and E is the elastic modulus of the material (MPa).

It can be seen from the above two criteria that the energy release rate G and the stress intensity factor K are positively related to the material breaking. If the value of G and K is higher than critical value, brittle cracking will occur and then propagate. The tensile stress perpendicular to the crack surface σ can be used to determine the probability of bamboo splitting.

Cutting Process Simulation Based on ANSYS/LS-DYNA

The dynamic simulation of the linear feed and the spiral feed cutting methods was carried out using ANSYS/LS-DYNA software (ANSYS, Inc., Ansys v.15.0, Pittsburgh, PA, USA) to obtain tensile stress perpendicular to the crack surface. The material model MAT_143 was selected to set up the bamboo model (Zhu et al. 2016). The simulation used a bamboo specimen with a diameter of 100 mm and a wall thickness of 10 mm. In order to reduce the computing time, a 200 mm bamboo knot was selected for simulation. The mechanical parameters of the bamboo were finally set as follows (Xia et al. 2016; Chen et al. 2020):

For simulation, a standard circular saw blade was chosen. The material used was T10 (Bajun Cutting Tool Company, Dongguan, China) with a diameter of 180 mm. The speed of the saw blade in both methods was 1200 r/min at 10 mm/s feed speed. Different from linear feed method, the spiral feed method involves a spiral around the bamboo axis; that is, there were feeds in two directions at the same time, with the radial feed speed of 1.0 mm/s and tangential feed speed of 9.95 mm/s. In order to reduce the computing time, the saw blade was set as a rigid body of density 7.9 mg/mm3, elastic modulus of 210 GPa, and the Poisson’s ratio was 0.275.

After the relevant model was established in SolidWorks (Dassault Systemes, SolidWorks 2018, Paris, France), it was imported it into ANSYS for pre-processing. The relevant element type and material were then set up, and the model was meshed (Li et al. 2018), as shown in Fig. 2, divided with 4480 units for the bamboo, and 4782 units for the saw blade. The bottom of the bamboo was set to be fully constrained, and corresponding loads were applied. Because the splitting of the bamboo mainly occurs at the beginning of cutting, only a period of time at the beginning of cutting was simulated, and the simulation time was set to 50 ms. As shown in Fig. 2, through the comparison of the stress cloud diagrams of the two cutting methods at the same time, it can be seen that the effective stress on bamboo in the spiral feed cutting method was smaller.

Because the splitting of bamboo occurs near the cutting position, six elements near the cutting position of the bamboo model (except for the two elements directly in contact with the saw blade) were taken for the tensile stress perpendicular to the crack surface, the stress is in the ZX direction in the ANSYS coordinate system. The position of the selected element is shown in Fig. 3.

After determining the cutting scheme, the cutting parameters were further optimized to reduce the cutting force during harvesting. As shown in Fig. 6(a), The outer diameter D of the selected saw blade is 90 mm, the inner hole diameter d is 22mm, and the number of teeth is 90.

As shown in Fig. 6(b), and the front angles δ1 and back angles δ2 of the tooth profile are both 15. It can be seen from Fig. 6(b) that when the saw blade is in the cutting operation, there exists a rotating speed n, and the feed motion also includes radial speed Vf1 and tangential speed Vf2. The angle between the direction of rotation and the direction of feed is called movement encounter angle θ.

The cutting power and cutting force at bamboo hollow with diameter of 100 mm were calculated. As shown in Fig. 7, taking the tooth tip as the research object, its relative motion trajectory was a cycloid AB, and CD was the cutting depth, H was saw road height.

Due to the particularity of bamboo, an empirical formula (Ma et al. 2006) was used to calculate the cutting power and cutting force during harvesting.

where b is the thickness of saw blade (mm), δ is cutting rake angle (°), and θ is work encounter angle (°).

Tool bluntness coefficient Cp is given by,

When the radial feed rate Vf1 = 0.1 m/min and the tangential feed rate Vf2 = 1.0 m/min, the relationship between cutting power, cutting force, and saw blade speed is shown in Fig. 8. It can be seen that when the speed is about n = 1000 r/min, the cutting force has a minimum value. At the same time, the cutting power increased with increasing speed.

Fig. 9. Effect of feed rate on cutting force and power

Based on the above calculations, the bamboo cutting mechanism was specifically designed. Its overall structure is shown in Fig. 10. It consists of hydraulic cylinder, link mechanism, cutting mechanical claw frame, and saw blade holder. The graphic position denotes the cutting position, the two hydraulic cylinders drive the mechanical claws to close through the linkage mechanism and cut the bamboo.

Fig. 11. Transmission route (a) and specific structure (b) of saw blade holder

The motion of a single saw blade was analyzed through the motion module of the SolidWorks software. The trajectory can be obtained as shown in Fig. 12(a). The theoretically designed spiral trajectory equation is Eq. 11: