Kurt, R. (2019). "Determination of the most appropriate statistical method for estimating the production values of medium density fiberboard," BioRes. 14(3), 6186-6202.

This study determines an optimum method to predict Turkish Medium Density Fiberboard (MDF) production values using ARIMA (Box-Jenkins), regression, and Artificial Neural Network (ANN). The prediction performance of these methods is also compared. A total of 14 independent variables, likely to influence MDF production, were determined, and the production values of the next 9 years (2017-2025) were predicted on the basis of these variables. The test results indicate that the best Mean Squared Error (MSE), Mean Absolute Percentage Error (MAPE), and Mean Absolute Deviation (MAD) prediction performance belongs to the prediction performed with ANN.

This study determines an optimum method to predict Turkish Medium Density Fiberboard (MDF) production values using ARIMA (Box-Jenkins), regression, and Artificial Neural Network (ANN). The prediction performance of these methods is also compared. A total of 14 independent variables, likely to influence MDF production, were determined, and the production values of the next 9 years (2017-2025) were predicted on the basis of these variables. The test results indicate that the best Mean Squared Error (MSE), Mean Absolute Percentage Error (MAPE), and Mean Absolute Deviation (MAD) prediction performance belongs to the prediction performed with ANN.

Modelling and other prediction methods are widely used in part due to recent developments in technology. Such increased variety of prediction methods has enabled a more thorough evaluation of analyses, thus paving the way for obtaining better results. ARIMA (Box-Jenkins), regression, and Artificial Neural Networks (ANN) are some of the commonly applied prediction methods.

In this study, the prediction performances of the mentioned methods were compared after prediction of the Medium Density Fiberboard (MDF) production quantities of Turkey.

The dependent variable, used in ARIMA, Regression, and ANN models, is the variable that is the subject of the prediction, and it comprises the values related to MDF production in Turkey (Fig. 1). The independent variables to be used in the regression analysis and ANN prediction models were inquired by a team of experts, and 14 variables that were likely to affect MDF production were determined accordingly. These independent variables are: MDF export (m3), MDF import (m3), Furniture export ($), Furniture import($), Consumer Price Index (CPI), Producer Price Index (PPI), Gross National Product Per Capita (GDP), Exchange Rate, Economic Growth (%), Population, Log (m3), Industrial Wood (m3), Building Number, and Building Area (m2). While all of these variables were used in the regression estimation, the number of variables was reduced to ten in order to provide more effective training of the network in ANN estimation. A data set involving a 26-year period (1991-2016) was used for the variables assigned for each product and model. SPSS for regression analysis, MATLAB for artificial neural networks, and MINITAB for ARIMA were used to build the most suitable models for prediction.

The future values of the independent variables to be used in the model should also be estimated as a means to make future predictions with regression and ANN models. The estimations for these values for the next nine years (until 2025) were found based on time series, and predictions were made on the basis of these estimated values. Initially, stationarity tests on times series were performed in prediction with ARIMA, and after ensuring stationarity, the most suitable model for prediction was determined. The prediction performances were compared after the calculation of Mean Squared Error (MSE), Mean Absolute Percentage Error (MAPE), and Mean Absolute Deviation (MAD) values, which are widely used in the literature.

In cases where time series were stationary, i.e., the average, variance, and covariance of the process varied depending on time, ARMA (p,q) or special versions of this model (AR(p) and MA (q)) were used. However, time-dependent variations in the average and variance of time series could occur in reality. Such situations are called non-stationary states. Such time series can be used after being transformed into stationary states. Stationarizing the time series is possible through evaluating the first and second differences series. In this case, the model is referred to as ARIMA (p,d,q) (Hamzacebi and Kutay 2004; Topcuoglu et al. 2005; Ozdemir and Bahadır 2010).

Generally, a nonseasonal time series can be modeled as a combination of past values and errors, which can be denoted as ARIMA (p,d,q) and expressed as a Eq. 1,

where  is the actual value,  is the random error at time t,  and  are model parameters, p and q integers that are often referred to as orders of autoregressive and moving average, respectively.

Artificial neural networks (ANN) are based on the functioning principle of the human brain, and they have emerged as a result of integrating learning processes into computer systems. This model has found a variety of applications ranging from finance and marketing to several engineering sectors. This method has been successful in producing reliable results and effective solutions of complex non-linear problems. For these reasons, this model is commonly used. In this context, ANN are capable of revealing unknown and indiscernible relationships and enabling their effective and optimum use (Kurt et al. 2017).

Artificial neural networks have been proposed as an adaptive evaluation method that can operate with missing data, derive decisions even under uncertain conditions, and tolerate errors (Oztemel 2012). A typical ANN cell is comprised of input data, weights, addition function, activation function, and output (Fig. 2). The data from the outer environment is taken into the ANN through the first layer (input layer). This layer constitutes the parameters that affect the problem. The parameters in the input layer are multiplied by weight coefficients that specify their effect in the neuron, then, the net input received by the neuron is calculated with addition function. Afterwards, this calculated net input value is evaluated by an activation function to determine the corresponding output to be produced. The output value specified by the activation function is then sent to another ANN neuron as input (Kurt et al. 2017).

The function of the network is described as follows,

Prior to the prediction process, the data subject to prediction were brought in compliance with each prediction method, and the model was built accordingly.

The series’ stationarity was checked with “Dickey-Fuller Tests” prior to the prediction process with ARIMA method. Augmented Dickey-Fuller test results are given in Table 1. As indicated by the results, the presence of a unit root is evident as the Dickey-Fuller test statistics of MDF production values exceeded the critical value of 1.836115. Also, the series is not stationary, as the significance (p) level 0.9995>0.05 (Stationarity: If p<0.05, the series is stationary).

As also indicated by the declining trend analysis graph, the series is under the effect of seasonal factor (Fig. 3). Dickey-Fuller test results, which were obtained after the evaluation of the second differences of MDF production values, show that the series is completely stationarized and the effect of the seasonal factor is eliminated (Dickey-Fuller test statistics is lower than the critical value of -4.931274, with a significance level of 0.0008<0.05). 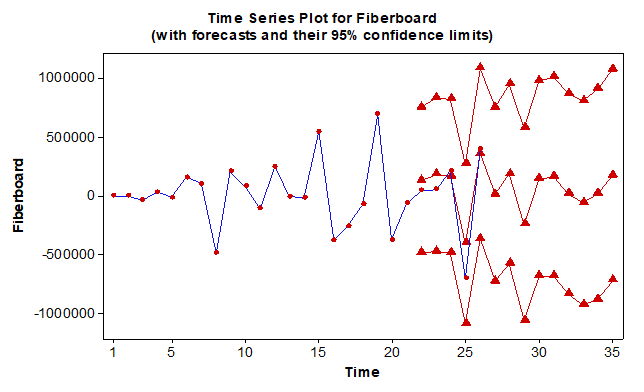 After the series was stationarized, different models were applied and as a result of the trials, the ARIMA (5,2,2) model was determined to be the most suitable model for prediction. Upon determination of the best model and statistical validation, the prediction stage was initiated. The prediction results for 2012-2025 period are given in Fig. 4.

Accordingly, the most suitable regression model for prediction of MDF production can be given with the following expression:

The t and F statistical test results of the hypotheses that apply for the independent variables and the overall model are given in Table 3.

Prior to the prediction of MDF production values with the Regression model, the projection of the independent variables for the next nine years were found with ANN with relation to the time series (years) and the projection values were calculated on the basis of these obtained values. The models which were used to predict the independent variables were significant at a level of p<0.05 (Table 4).

Table 4. Regression Equations Used for the Prediction of the Independent Variables

After the determination of independent variables with the best suitable model, the MDF production values for years 2016-2025 were predicted (Table 5).

Ten variables, likely to be effective on the MDF production, constituted the input variables of the ANN model. The feedforward backpropagation ANN was used by the use of input and output neurons. The number of hidden layers was set as 1, and the number of neurons in the hidden layer was set as 8 after a number of trials between 1 and 10. Sigmoid activation function, commonly used for ANN, was used as the activation function. The number of neurons in the output layer was specified as 1, as this value can be equal to the number of dependent variables for cause-and-effect-relation based predictions. The structure of the ANN model, built for MDF production, is given in Fig. 5.

Fig. 5. The structure of the ANN model

Following the determination of the number of input and output neurons for ANN model, independent and dependent variables were subjected to the logarithmic transformation, for ensuring their usability in the system. Twenty-six data sets for each year within the period from 1991-2016 were evaluated, and 70% of these data were used for training, 15% were used for validation, and 15% were used for testing purposes.

After the training of the network was completed, testing and validation procedures were performed. For the test of the model, data between 2012 and 2016, which the system has never seen before, were used. Figure 6 shows the change in the error values for the training, validation, and testing sets at each iteration for the MDF production, as well as training status of the network, and regression values. As shown in the figure, regression values are reliable at a rate of about 99% at training, validation, and testing stages.

After determination of the most suitable coefficients and accomplishing the training of the network, the prediction stage was initialized. Independent variables were predicted and the data were entered into the ANN model to predict the 2016-2025 MDF production values (Table 6).

Comparison of the Prediction Performance

As indicated by the table, the highest increase in the future MDF production is predicted by ARIMA method, whereas the lowest increase was predicted by ANN. The real and predicted values for all three methods were significantly close for the 2012-2015 period.

Altin, A. (2007). “Modelling of water amount which goes into Dodurga dam by using Box-Jenkins technique,” Journal of Engineering and Architecture Faculty of Eskisehir Osmangazi University 20(1), 81-100.

Ertugrul, I., and Bekin, A. (2016). “Comparative analyses of forecasting models of artificial neural network and time series analyses for selected main food prices in Turkey,” Kafkas University Journal of the Faculty of Economics and Administrative Sciences 7(13), 253-280. DOI:10.9775/kauiibfd.2016.013

Hamzacebi, C., and Kutay, F. (2004). “Electric consumption forecasting of turkey using artificial neural networks up to year 2010,” Journal of the Faculty of Engineering and Architecture of Gazi University 19(3), 227-233.

Yayar, R., and Karakcier, O. (2003). “To determine the model and estimate of future for foreign trade series of agricultural sector (The forecast method of Box-Jenkins),” Journal of Agricultural Faculty of Gaziosmanpasa University 20(2), 89-108.