Effect of activation temperature on properties of H3PO4-activated carbon

Effect of Activation Temperature on Properties of H3PO4-Activated Carbon 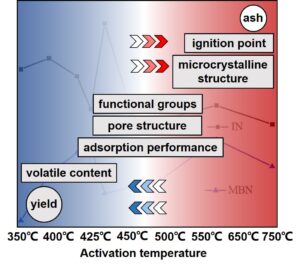 Producing activated carbon from biomass waste is a good way to reduce environmental pollution and the use of limited resources (Hesas et al. 2014; Jain et al. 2016). Phosphoric acid (H3PO4) is used industrially for preparing activated carbon from lignocellulosic materials (Heidarinejad et al. 2020). H3PO4 is effective for producing mesopores at lower temperatures. In addition, H3PO4 provides an easier way to recover the carbon product during processing stage by rinsing with water (Yahya et al. 2015). Compared with other activating compounds such as KOH (Mao et al. 2015), ZnCl2 (Duan et al. 2019), and K2CO3 (Mao et al. 2020), it also gives higher yield of activated carbon and has non-toxic properties (Romero-Anaya et al. 2012). The H3PO4 method has been used for almost 40 years. At present, approximately 0.2 million tons of activated carbon is produced by H3PO4 in China (Environmental Monitoring Center Station of Ningxia 2018). With a huge market demand, the activated carbon is an indispensable and important chemical product for the national economy and ecological environment construction.

Activation temperature (Ta) is an important factor in the preparation of H3PO4-activated carbon because H3PO4 works above 300 ℃ (Jagtoyen and Derbyshire 1998; Zuo et al. 2010). The Ta affects the thermal decomposition of cellulose, hemicellulose, and lignin (Yang et al. 2007; Chen et al. 2018). Moreover, Ta affects the formation and thermal transformation of phosphonate compounds to connect and crosslink biopolymer fragments (Zuo et al. 2018). Finally, Ta is a direct factor for H3PO4 to dehydrate and polymerize itself (Kang et al. 2018). The influence of Ta on the surface area, pore development, and yield of activated carbon have been investigated. Increasing temperature is beneficial for the formation of pores in the carbon, especially when the temperature increases from 400 to 500 ℃ (Luo et al. 2019). This is ascribed to the use of activating agent releasing the tar from the cross-linked framework (Foo and Lee 2010). However, with further increases in temperature, violent gasification reactions destroy part of the micropore structure, leading to decreased surface area and pore volume (Chen et al. 2013). Moreover, increased temperature elevates the ash and fixed carbon percentage, decreasing the volatile matter and the solid yield (Ioannidou and Zabaniotou 2007). A final Ta of 400 °C is suitable for producing high-surface-area activated carbon (Yorgun and Yildiz 2015; Kang et al. 2018). This temperature is favorable for increasing yield and reducing ash content. Thus, the Ta is usually in the range of 400 to 500 °C (Demiral and Şamdan 2016; Villota et al. 2017; Villota et al. 2019), and the activated carbon prepared at these temperatures can have well-developed porous structure and large adsorption capacity, which is beneficial for decolorization, water purification, catalytic carriers, and other industrial needs (Malaika et al. 2018; Wu et al. 2019).

The BET specific surface area was measured using a Micromeritics ASAP 2460 apparatus (Norcross, GA, USA) at 77 K. The pore size distribution was computed based on the density functional theory (DFT) method. Thermogravimetric analysis (TG) was carried out by a Netzsch STA449C apparatus (Selb, Germany). A 10 mg sample was heated to 800 ℃ under the protection of the nitrogen with a heating rate of 10 ℃/min. The X-ray diffraction (XRD) was performed on a Bruker D8 Advance X-ray diffractometer (Karlsruhe, Germany) with Cu Kα radiation (λ=0.154 nm), Scanning range was 10 to 80° with 0.1°/s. The Fourier transform infrared (FTIR) was tested on a Magna-IR spectrometer 550 (Madison, WI, USA) in the range of 4000 to 400 cm-1 with a resolution of 4 cm-1.

Effect of Ta on Ash Content and Yield of Activated Carbon

Fig. 1. (a) Ash content and (b) yield of activated carbon with different Ta

As shown in Fig. 1(b), the yield of activated carbon was affected by Ta. During the preparation of activated carbon, the yield of activated carbon continuously decreased with the increase of Ta. When Ta was 300 ℃, the yield was 67.4%, and the yield decreased to 48.6% at 450 ℃. The turning point of the curve occurred at 450 ℃, showing that the pyrolysis rate was faster and the degree of pyrolysis was higher before 450 ℃. The effect of Ta on the yield is related to the degree of pyrolysis of raw materials at different temperatures. With increasing temperature, the cellulose, hemicellulose, and lignin making up the sawdust are pyrolyzed gradually, resulting in a continually decreased yield. To compare the influence of H3PO4 on the pyrolysis process of sawdust, TG (Fig. 2) was carried out for FS and fir sawdust impregnated H3PO4 (FS-H3PO4). The thermal decomposition of FS was concentrated in 250 to 400 ℃, and the mass loss in this range was increased from 4.28% to 71.4%. After the FS was soaked with H3PO4, the thermal decomposition range was changed into two stages, 130 to 450 ℃ (mass reduced from 91.4% to 66.9%) and 450 to 700 ℃ (mass reduced from 66.9% to 28.2%). Comparing the TG curves for the two specimens, the addition of H3PO4 improved the yield and changes the thermal decomposition process of FS (Yagmur et al. 2018). In the pyrolysis process, the catalytic dehydration of H3PO4 makes the weight loss of FS-H3PO4 more obvious before 334 ℃. Above 334 ℃, H3PO4 forms stable phosphonate compounds with FS, protects the pyrolysis of FS, and enhances the yield (Yakout and Eldeen 2016), whereas the pyrolysis of FS unimpregnated H3PO4 is more obvious. The weight drop of FS-H3PO4 after 450 ℃ can be explained by the destruction of phosphonate compounds (Solum et al. 1995; Jagtoyen and Derbyshire 1998) and the volatilisation of phosphorus compounds (Suarezgarcia et al. 2004; Puziy et al. 2005). It is more appropriate to assume that P2O5 (formed by dehydration of H3PO4) behaves as an oxidant, which can react with carbon, reducing the yield and forming new pores (Olivaresmarin et al. 2006). The mechanism of this process is shown in Fig. 3, and the result is consistent with the turning point of yield in Fig. 1(b) at 450 ℃. The volatilisation of phosphorus compounds does not lead to the decrease of ash content of activated carbon, and it can be inferred that the phosphorus compounds are not the only source of ash in activated carbon.

Effect of Ta on Ignition Point and Volatile of Activated Carbon

XRD was employed to analyze the effect of different Ta on the microcrystalline structure of the activated carbon. As shown in Fig. 5a, three diffraction peaks at 16°, 22°, and 34° for FS represent the (101), (002), and (004) crystal planes of cellulose (Ma et al. 2017). Two obvious peaks are observable at 24° and 42° for activated carbon corresponding to the (002) and (100) planes of amorphous carbon (Chen et al. 2017). These changes indicate that the crystalline area of cellulose was destroyed after activation, representing the formation of amorphous carbon. The amorphous carbon produced above 300 ℃ is the basis for the formation of pores. The pores are produced by removing various carbon-containing compounds and disordered carbon between the basic crystallites of amorphous carbon during the preparation of activated carbon (Wigmans 1986). With the increase of Ta, the diffraction peak of amorphous carbon gradually increases and shifts to the high angles, the stacking thickness of carbon layer along (100) direction increases, and the degree of graphitization increases (Wada et al. 2010). The exception occurs at 650 °C and 750 °C, when the (002) shifts to low angles, which may be related to the channel collapse at high temperature. The elevated degree of graphitization makes the internal structure of activated carbon orderly and regular. The reduction of the spacing of microcrystalline layers may make the internal phosphoric acid unable to elute. The formation of stable graphite-like microcrystalline structures may also reduce their tendency to spontaneous combustion.

Fig. 5. (a) XRD and (b) FTIR curves of activated carbon with different Ta

The changes in functional groups on the surface of activated carbon prepared at different Ta were studied by FTIR, as shown in Fig. 5b. In all spectra, the band located at 3430 cm-1 can be assigned to the O-H stretching mode. The band of activated carbon prepared at 300 ℃ is obviously asymmetric, indicating the existence of hydrogen bond (Ma et al. 2017). A small peak at 2920 to 2850 cm-1 can be assigned to the C-H stretching mode, and its bending mode appears at 1440 cm-1 (Mao et al. 2018). The band of C=O appears at 1700 cm-1. With increased Ta, the intensity of C=O decreased and disappeared above 500 ℃, and the band position shifted to a low wave number, indicating decarbonylation. This effect was apparent when the intensity of C-O (1060 cm-1) increased with the elevated Ta. A strong band at 1580 cm-1 was ascribed to the stretching vibration of aromatic ring (C=C), demonstrating that the carbonyl (1700 cm-1) is conjugated with aromatic ring. A small red shift with the increase of Ta indicated the growth of aromatic ring structure (Puziy et al. 2002), which is unfavorable to the adsorption performance of activated carbon but is the basis for the enhancement of the structural order and graphitization degree of activated carbon (Leung and Safford 1970). The increase of aromatic ring structure is caused by the catalytic dehydration of phosphoric acid, and the process is shown in Fig. 6 (Benaddi et al. 1998). The band at 1160 cm-1 is assigned to phosphates with stretching mode of P=O, P-O-C, and P=OOH. The bands at 1060 cm-1 are due to C-O stretching in alcohols, phenols, ethers, and esters, or P+-O– (Puziy et al. 2005; Ma et al. 2018). The broad band between 750 cm-1 and 900 cm-1 corresponding to the out-of-plane bending mode of aromatic ring C-H weakened and disappeared when Tawas higher than 500 ℃. The change indicates that the functional group of activated carbon has replaced or formed a dense ring structure.

Fig. 8. IN and MBN curves of activated carbon with Ta

This work was financially supported by the Biomass Energy & Materials Laboratory of Jiangsu Province (JSBEM-S-202010), and the National Key R&D Program of China (Project No. 2019YFB1503804). The authors are grateful for the analytic support of the Instrument Analysis Center and Pulp and Paper Research Lab at the Institute of Chemical Industry of Forest Products, CAF, Nanjing, China.

Greenwood, N. N., and Earnshaw, A. (1997). Chemistry of the Elements, Butterworth-Heinemann, Oxford, UK.