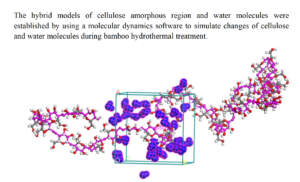 Heat treatment can be used to improve the performance of bamboo products (Tao et al. 2015). Bamboo heat treatment is similar to wood heat treatment. It uses air, inert gas, or steam as a heat transfer agent for physical modification treatment at high temperatures between 150 to 240 °C. Heat treatment improves the physical properties, dimensional stability, and hygroscopicity of bamboo because of the change of surface and internal structure and composition of bamboo (Cao et al. 2012; Wang et al. 2018). Appropriate treatment temperature reduces the hygroscopicity and water absorption of bamboo and improves the dimensional stability and durability of bamboo. The high temperature leads to surface hardening and reduces its mechanical strength, which reduces the comprehensive strength of bamboo and affects its application in bamboo products and the bamboo industry (Yang et al. 2016; Azadeh and Ghavami 2018). Different treatment temperatures have a significant effect on the properties of bamboo after hydrothermal treatment.

Many studies have revealed the effect of temperature on the properties of bamboo. Bui et al. (2017) found that bamboo has the best durability and mechanical properties when the temperature is 180 °C and the treatment time is 1 to 2 h. Wang et al. (2020c) reported that high temperature saturated steam treatment reduces the equilibrium moisture content of bamboo and improves the dimensional stability and durability of bamboo stalks; the 180 °C treatment for 10 min is a favorable treatment condition. Wang et al. (2020a) found that the compressive strength, bending strength, and bending elastic modulus of bamboo are increased, while the shear strength is decreased when the temperature is 180 °C.

With the development of heat treatment and molecular dynamics technology, the research on cellulose from the microscopic level of bamboo has gradually become a hotspot of research. Khazraji and Robert (2013) found that the cellulose polymer has strong reactivity with water molecules, and water molecules easily form a hydrogen bonds with the cellulose chain. Huang et al. (2019) revealed that ammonia molecules increase the end distance of cellulose Iβ and thus enhance its compliance. Wang et al. (2020b) found that the mass fraction of water molecules has a greater impact on bamboo heat treatment through molecular dynamics simulation, and cellulose has the best mechanical properties when the mass fraction of water was 3% for heat treatment simulation.

Cellulose, the main component of bamboo, is a polymeric compound formed by the polymerization of D-glucopyranose. It consists of crystalline and amorphous regions. The cellulose molecules in the crystalline zones are arranged in a compact and orderly manner, and their mechanical properties are difficult to be broken at high temperatures. However, the amorphous region of cellulose has an irregular structure and good flexibility, which can make the cellulose material show a soft side, and its mechanical properties are easily affected by temperature (Khazraji and Robert 2013). Therefore, the amorphous region was selected to study the effect of temperature on bamboo hydrothermal treatment.

The amorphous region of the bamboo cellulose molecular chain was modeled using Materials Studio 8.0 software (BIOVIA, v.8.0, San Diego, CA, USA). The degree of polymerization (DP) has no remarkable effect on the simulation results of the physical properties of the material (Mazeau and Heux 2008). In this paper, a cellulose chain was created with a DP of 20 (Wang et al. 2018). The construction of the amorphous region polymer adopts the method proposed by Theodorou and Suter (1985) and uses the Amorphous Cell Tools (AC) module for modeling. The model target density was set to 1.5 g/cm3 (Onyon 1972). In the model, 30 water molecules and a cellulose chain with a DP of 20 were added. The size of the simulated unit cell was 20.2 × 20.2 × 20.2 (A3). The established model is shown in Fig. 1.

The model shown in Fig. 1 was optimized for structure and energy minimization. The Forcite Calculation module was used for structural optimization, and the smart algorithm was chosen to run 5000 steps. The dynamic relaxation of the model was carried out at 25 °C in the canonical ensemble (NVT) for 1000 ps to minimize the energy of the system. The time step was 1 ps. One frame was output every 5000 steps, and the Nose method was selected as the temperature control method. The temperature of bamboo hydrothermal treatment starts from 90 °C and increases by 30 °C each time to 240 °C. This temperature range includes the set temperature required for the bamboo hydrothermal treatment process.

The dynamic simulation was of the model carried out in the isothermal isobaric ensemble (NPT) with a time of 1000 ps. The Andersen method was selected as the temperature control method (Andrea et al. 1983); the Berendsen method was selected as the pressure control method (Berendsen et al. 1984). The Van der Waals force was computed by atom-based calculations (Andersen 1980); the electronic effect was computed by the Ewald method (Ewald 1921). All simulations were performed under the PCFF force field, which originated from the CFF91 force field. It is suitable for calculating organic compounds, especially natural polymer materials.

In molecular dynamics simulation, energy was used as the basis for system equilibrium. Figure 2 shows the dynamic energy diagram of the bamboo cellulose-water molecule model. The total energy values of the last 200 ps fluctuated slightly above and below its average value, which showed that the system tends to equilibrium.

Fig. 2. The dynamics energies of model

Fig. 3. The average energies of the model at different temperatures

Table 1. The Average Bond Energy of the Model at Different Temperature

The bond energy term increased continuously with the increasing temperature. According to these data, temperature damages bamboo fiber. Therefore, to meet the basic temperature requirements of hydrothermal treatment, the temperature should be lowered as much as possible to reduce the influence of temperature on bamboo.

where Nw is the number of water molecules in the system. The Einstein relationship can be used to solve the diffusion coefficient by the slope of the mean square displacement when t is large enough (Yang et al. 2013), as shown in Eq. 4,

where K represents the slope of the mean square displacement (MSD) curve. Based on the analysis of the model, the MSD at different temperatures was obtained (Fig. 4).

As shown in Fig. 4, the MSD of water molecules increased linearly with time in the simulation time of 0 to 900 ps, and a there was a large deviation from 900 to 1000 s. This deviation can be regarded as a statistical error calculation. The first 900 ps was fit according to the principle of the least square method to find the size of the diffusion coefficient, as shown in Table 2. The diffusion coefficient of the water molecule in the cellulose model increased with rising temperature; at higher temperatures, more energy is absorbed by water molecules. With the increase of its energy, the thermal motion of water molecules becomes more violent, which makes it easier to penetrate the bamboo cellulose chain, thereby improving the processing efficiency of bamboo hydrothermal treatment.

The MSD of the Bamboo Cellulose Chain

The dynamic mechanical parameters of the bamboo cellulose amorphous zone model at different temperatures characterize the effect of temperature on the changes in the mechanical properties of bamboo. Cauchy pressure (C12-C44) is usually used to measure the ductility of a system, which is the ability of a material to deform without cracking. The higher the value is, the better the ductility of the system is. In general, a material with good ductility will have a positive value (C12-C44); otherwise it will have a negative value. Young’s modulus (E) is the longitudinal elastic modulus, which is used to characterize the ability of a material to resist deformation. A larger value indicates the ability of the material to resist deformation. Shear modulus (G) characterizes the ability of a material to resist shear strain, where a larger value represents stronger rigidity and less ductility. Poisson’s ratio (γ) is the absolute value of the ratio of the material’s transverse variable to the longitudinal variable when the material is subjected to external stress. A greater value results in stronger plasticity. The larger ratio of bulk modulus to shear modulus (K/G) indicates greater toughness in the material. The parameters of mechanical properties at different temperatures were obtained by the Forcite module in MS, and the results are shown in Table 3.

The parameters λ and μ are called Lame constants. They can be calculated by the Forcite module. Lame constants can be used to calculate Young’s modulus (E), shear modulus (G), Poisson’s ratio (γ), bulk modulus (K), as follows,

As shown in Table 4, with increasing temperature, the value of Young’s variable with the boundary of 180 °C decreased first and then increased. Thus, the flexibility of bamboo material increased first and then decreased. Similarly, the value of shear modulus was smaller at 180 °C; with increasing temperature, the ductility at 180 °C decreased first and then increased. The values of Poisson’s ratio and K/G were higher than other setting temperatures at 180 °C, but if the temperature continues to rise, the Poisson’s ratio and K/G values gradually decreased. When the treatment temperature is below 180 °C, due to the increase of temperature, the interaction between water molecules and cellulose becomes more and more sufficient, leading to the mechanical properties of bamboo gradually becoming better.  With the increase of temperature, the intermolecular bond energy gradually increases. When the temperature exceeds 180 ℃, some active bonds in the bamboo material are unstable or even broken due to the large repulsive force between the atoms within the molecule, which leads to the deterioration of the mechanical properties of the bamboo cellulose.  At 120 ℃, the mechanical properties of cellulose are also better, which may be attributed to the lowest bond energy term in the system and the equilibrium state.

The simulation results are consistent with good plasticity when the heating temperature does not exceed 180 °C. Overall, these results indicate that if bamboo heat treatment is to pursue better plasticity, toughness, and ductility in the process of selecting water vapor as the heat transfer medium, the temperature setting of bamboo hydrothermal treatment should not exceed 180 °C. It is also consistent with the conclusion that hydrothermal treatment at appropriate temperature can improve the bending elastic modulus of bamboo, and too high temperature will degrade its properties, which Yun et al. (2016) studied.

Table 4. Mechanical Parameter of the Model at Different Temperatures

The authors are grateful for the support by The Fundamental Research Funds for the Central Universities (41419020).