Water pollution is a crucial environmental issue that receives worldwide attention. As one of the main pollutants, dyes are toxic, non-biodegradable, and even carcinogenic, which create serious threats to aquatic organisms and human health. Hence, the efficient removal of dye pollutants from wastewater into an acceptable level before discharging into the natural environment is necessary.

During the past three decades, various physical, chemical, and biological treatment methods have been reported for dyes treatment, such as coagulation, membrane filtration, chemical oxidation, electrodialysis, photodegradation, and adsorption (Singh and Arora 2011). Of these, the adsorption method is a simple, competitive method for dye removal. The development of new adsorbents with high loading capacity and high rate of uptake play a key role in the removal of toxic dye molecules. Carbon nanomaterials and graphene are newly developed and efficient adsorbents for the removal of pollutants in air and wastewater (Zhuang et al. 2016) systems. However, the relatively low density of functional groups, the higher production cost, and regeneration difficulty of the materials used limit their widespread practical applications. Therefore, the development of high-efficient, green, sustainable, and cheaper adsorbents based on natural materials is a subject of intensive research (Crini and Badot 2008).

Cellulose is the most abundant polysaccharide found in nature, and it is a non-toxic and low cost material that is biocompatible, biodegradable, and renewable. Due to its unique features, cellulose can directly adsorb dyes; however, the adsorption capacity of pure cellulose is fairly low. Recently, many investigators have tried to develop functional (such as carboxyl, amino, sulfo group, and cyclodextrin functional) cellulose-based materials to enhance the dye adsorptive property. For example, Gopakumar et al. (2017) synthesized meldrum’s acid modified cellulose nanofiber-based polyvinylidene fluoride microfiltration membrane via nonsolvent assisted methodology, which was found to adsorb 4 mg·g-1 from 10 mg·L-1 crystal violet aqueous solution. The carboxylate-functionalized cellulose nanocrystals were demonstrated to have the effective removal capacity for cationic dyes (Qiao et al. 2015).

In this study, a functional cellulose-based bio-adsorbent with efficient dye adsorption capacity was prepared using chemical polymerization process. A cellulose-g-p(AA-co-AM) (CP) bio-adsorbent with multiple surface functional groups and a macroporous network structure was synthesized through grafting of acrylic acid (AA) and acrylamide (AM) molecules onto cellulose molecules. Although cellulose-based adsorbents for environmental removal have been reported, there are few reports showing a correlation between the structural features of cellulose-based adsorbents and adsorptive properties.

The purpose of the present work was to synergize the combination of the presence of carboxyl, amino, and hydroxyl functional groups, and a macroporous network structure to enhance the adsorption capacity and favor the widespread use of cellulose for dyeing wastewater remediation. Two organic dyes (methylene blue (MB) and acid red (AR1)) were used as model pollutants to investigate the adsorption characteristics of CP bio-adsorbent in aqueous solution. The chemical structures and molar masses of MB and AR1 are shown in Table 1.

The structural characteristics of CP bio-adsorbent, their recyclability, and the effect of pH, temperature, initial dye concentration, and contact time on adsorption behavior and adsorption kinetics for dye molecules were investigated. The results showed that the CP bio-adsorbent was a desirable adsorbent that has a practical and potential effect in the treatment of environmental remediation.

The CP bio-adsorbent was prepared by grafting AA and AM monomers on cellulose macromolecular chain through free-radical copolymerization, as previously described (Su et al. 2016). Briefly, 2 g of cotton linter was dissolved in 66 g of a mixed aqueous solution of 12 wt% urea/7 wt% NaOH to obtain a cellulose solution. About 0.2 g of APS was dissolved in 1 mL of distilled water before use, and it was then added into the cellulose solution to produce free radicals by stirring for 5 min at room temperature. Afterward, 10 g of AA, 2 g of AM, and 0.06 g of MBA were added. The reaction was carried out for 24 h at -18 °C to finish the polymerization. The obtained gels were washed with distilled water and ethanol three times to remove the residual monomers. All samples used for the adsorption test were dried overnight at 60 °C. Finally, the dried products were milled through a screen with 30 to 40 mesh before adsorption tests.

The cationic dye MB and anionic dye AR1 were selected as the model dyes for adsorption experiments. In a typical experiment, 0.1 g of CP bio-adsorbent was added into 100 mL of aqueous dye solution for 60 min (stirring at 120 rpm) except for the contact time study. The amount of residual dye in the solution was then measured with UV-Vis spectroscopy (UV-2900, Hitachi, Tokyo, Japan) at ambient temperature, and the dye concentration was calculated by the absorbance at the maximum absorption. The effects of pH (3 to 12), temperature (15 to 60 °C), contact time (5 to 60 min), and the initial dye concentration (100 to 1500 mg·L-1) were investigated with 0.1 g of CP bio-adsorbent. The dye removal was calculated from Eq. 1 (Wang et al. 2016),

where C0 (mg·L-1) and Ct (mg·L-1) were the initial and “t” time concentrations of dye in solution, respectively.

The recyclability and reuse of the adsorbents are crucial criteria for their practical applications. Because of its macro structure, the CP bio-adsorbent was easily separated after the adsorption experiment. It was found that 50% ethanol can be applied as desorption agent to regeneration the MB and AR1 from the bio-adsorbent under agitating at room temperature for 1 h (Qiao et al. 2015). To realize the recyclability of the bio-adsorbent, consecutive adsorption-desorption recycles were carried out five times.

Table 1. Chemical Structure and Some Properties of MB and AR1

Synthesis and Characterization of CP Bio–adsorbent

The CP bio-adsorbent was synthesized by free radical graft copolymerization. The strategy is presented in Fig. 1. The functional groups such as −COO− and −CO−NH2 groups were grafted in the cellulose skeleton by using AA and AM monomers. Compared with the fibrous cotton cellulose (Fig. 2a), the modified CP bio-adsorbent displayed properties of a 3D network; its macroporous structure and the pore size ranged from 50 to 100 μm (Fig. 2b). In Fig. 2c, the 3D porous structure was preserved after MB load and completely recovered after five times adsorption desorption cycles (Fig. 2d). The dye molecules were filled in the 3D pores via an intermolecular interaction. The CP bio-adsorbent with 3D porous structure showed favorable mass transfer performance and allowed adsorption on both surface and interior of the adsorbents, which is beneficial for higher adsorption capacity (Zhai et al. 2012). 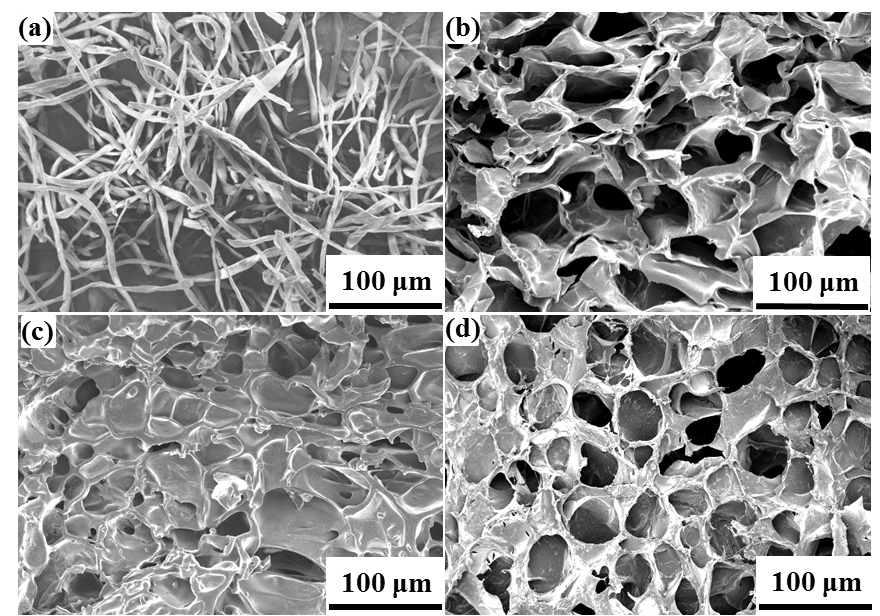 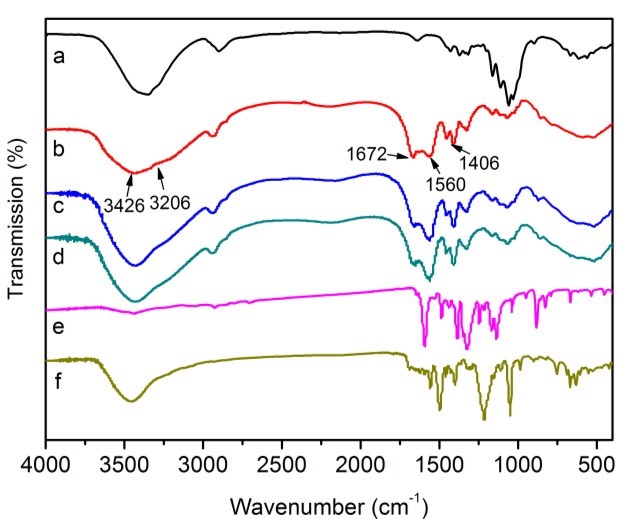 Fig. 4. Drawing indicating the possible interactions between the bio-adsorbent and the dye molecules

Effect of solution pH on the adsorption performance 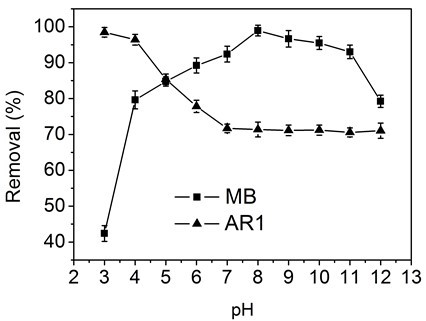 Fig. 5. Effect of pH values on the adsorption capacity of CP bio-adsorbent to MB and AR1 dyes.

Effect of temperature on the adsorption performance 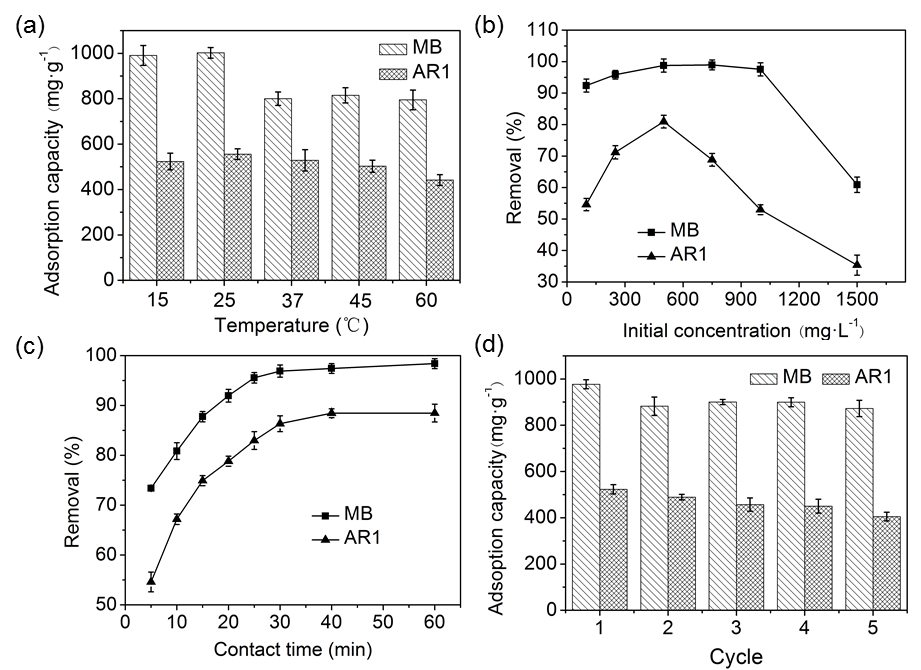 Effect of initial dye concentration on the adsorption performance

As shown in Fig. 6b, the dye removal increased from 92.40% to 98.95% with an increase in MB concentration from 100 to 1000 mg·L-1, beyond which it decreased to 60.89% at 1500 mg·L-1. In the case of AR1, the corresponding increase was from 54.59% to 80.92% with concentration from 100 to 500 mg·L-1, beyond which it decreased to 35.34% at 1500 mg·L-1. This trend might be explained by the fact that plenty of vacant active sites were available for the adsorption at a lower dye concentration, and the saturated sites had difficulty to capture the dye molecules (Eskandarian et al. 2014). As for MB dye, the removal efficiency was higher than AR1, which probably was due to the smaller spatial prohibition in the molecular structure of MB and this positive feature makes  the adsorption sites of CP bio-adsorbent more accessible to the dye (Ho et al. 2016). By contrast, the decrease in the removal rates of MB and AR1 dyes when the initial concentration was more than 900 mg·L-1. This can be explained by the saturation of the active adsorption sites at higher dye concentrations, consequently reducing the dye removal on the CP bio-adsorbents. Similar results were reported previously (Mahmoodi 2011).

Effect of contact time on the adsorption performance and adsorption kinetics

Figure 6c shows that the initial dye removal rate of the CP bio-adsorbent increased rapidly within 30 min, and then reached adsorption equilibrium at 30 min for MB and 40 min for AR1. This was mainly attributed to the fast electrostatic attraction between adsorbates and the adsorbent surface, which contains more functional groups with large substantial adsorption sites, as presented in Fig. 4. After the initial period, the adsorption curves became smooth and constant. It is because of the slower chemical interactions and intermolecular forces which make adsorbates become immobilized. To obtain full adsorption equilibrium, 1 h was selected in this study for the further investigation of MB and AR1 dyes.

Table 2. Kinetic Parameters for Dyes Adsorption on the CP Bio-adsorbent

The recyclability and reuse of adsorbents are crucial for their practical applications. As indicated in Fig. 6d, the adsorption capacity declined slightly when the adsorption-desorption cycles were increased; the dye adsorption capacity of adsorbents to MB after one and five cycles was 998 mg·L-1 and 872 mg·L-1, respectively, while that of AR1 was 523 mg·L-1 and 405 mg·L-1, respectively. Thus, the CP bio-adsorbent showed excellent recycling ability for the treatment of the MB and AR1 dyes from aqueous solutions.

The work is financially supported by the National Natural Science Foundation of China (51303159, 51672251) and the Program for the Zhejiang Top Priority Discipline of Textile Science and Engineering (2013YXQN06).