The heterologous expression of the gene LACP83 (encoding a laccase) from Pleurotus ostreatus in Escherichia coli was characterized. The laccase enzyme activity and kinetics of bacterial growth with an inducer (IPTG) and without inducer were determined. The maximum enzymatic activity was observed at 7 h post induction with a value of 3740 ± 342 U/L, which was similar to that reported for the native strain of P. ostreatus at 144 h of culture. Furthermore, the induction of laccase with IPTG reduced the specific growth rate of recombinant E. coli BL21 by approximately 50%. These results support the use this system for the recombinant production of the enzyme on an industrial scale.

The heterologous expression of the gene LACP83 (encoding a laccase) from Pleurotus ostreatus in Escherichia coli was characterized. The laccase enzyme activity and kinetics of bacterial growth with an inducer (IPTG) and without inducer were determined. The maximum enzymatic activity was observed at 7 h post induction with a value of 3740 ± 342 U/L, which was similar to that reported for the native strain of P. ostreatus at 144 h of culture. Furthermore, the induction of laccase with IPTG reduced the specific growth rate of recombinant E. coli BL21 by approximately 50%. These results support the use this system for the recombinant production of the enzyme on an industrial scale.

Laccases are enzymes found in plants (Wang et al. 2015), insects (Ye et al. 2015), bacteria (Tonin et al. 2016), and white rot fungi (Yang et al. 2015). These enzymes use copper as a cofactor and oxidize a wide range of phenolic compounds including mono-, di- and polyphenols, aminophenols, methoxyphenols, and aromatic amines, with the consequent reduction of molecular oxygen to water (Madhavi and Lele 2009); the oxidation of these compounds generates free radicals that polymerize or degrade (Claus 2003). Laccase isoenzymes have different physicochemical properties (Téllez-Téllez et al. 2012a). They are widely used in industry and biotechnology processes, such as the paper, textile, food, and pharmaceutical industries, and their applications have extended to the synthesis of compounds in nanobiotechnology (Barreca et al. 2003; Alper and Acar 2004; Nicotra et al. 2004; Gamelas et al. 2005; Pazarlıoǧlu et al. 2005; García-Rivero et al. 2015). Pleurotus ostreatus is a basidiomycete and a laccase producer. Its maximum enzyme activity is found in its stationary growth phase at about 360 h of culture (Téllez-Téllez et al. 2008); therefore, the production time of the enzyme is limiting. These enzymes are induced, and the transcription gene of laccases is regulated by different carbon and nitrogen sources (Bertrand et al. 2013). In strategies to increase production, inducers have been added to the culture medium of the fungus, such as 2,2′-azino-bis (3-ethylbenzothiazoline-6-sulphonic acid) (ABTS) (Hou et al. 2004), ferulic acid (Yao et al. 2013), plant residues (Quevedo-Hidalgo et al. 2015), and azo dyes (Camacho et al. 2015). However, production times are still very long and costly.

Molecular tools have also been used to increase the production of laccase. There are over 1200 laccase gene sequences stored in the database of the European Molecular Biology Laboratory (EMBL) (https://www.embl.de). More than half of these genes belong to fungi, and several have been expressed in homologous and heterologous systems, for example, laccase genes from Schizophyllum commune in Aspergillus sojae (Hatamoto et al. 1999), from Trametes versicolor in Pichia pastoris (Hong et al. 2002), and from Trametes sp. in P. methanolica (Hong et al. 2007).

Laccases from P. ostreatus have only been expressed in eukaryotic systems such as Kluyveromyces lactis, Saccharomyces cerevisiae (Piscitelli et al. 2005), Trichoderma reesei (Dong et al. 2012), and P. pastoris (Zhang et al. 2005; Park et al. 2015; Rivera-Hoyos et al. 2015), and to date, there is no report on their expression in a prokaryotic system such as E. coli. This bacterium has been widely used for gene expression because it is genetically characterized, spreads easily in simple media with a high rate of cell growth, and can produce high levels of recombinant protein (Sugantha et al. 2010; Wang et al. 2014; Wurm et al. 2016); thus, it is an interesting alternative for the expression of laccases genes from fungi. In this study, a laccase gene from P. ostreatus called LacP83 (Téllez-Téllez et al. 2012b) was cloned and expressed in E. coli.

Strains of E. coli TOP 10 and BL21 (Thermo Fisher Scientific, Waltham, MA, USA) were grown in Luria-Bertani (LB) medium and incubated at 37 °C for 18 h at 250 rpm. The culture medium used to select transformed cells was LB with 2 mg of ampicillin per mL (LB/Amp) and the same incubation conditions as above. The culture medium used for induction of the recombinant gene was LB/Amp added with 0.1 mM isopropyl-β-D-1-thiogalactopyranoside (IPTG) and 0.25 mM CuSO4, as reported by Guan et al. (2014). The culture media and the chemical compounds used in this step were supplied by Sigma-Aldrich (Toluca, Mexico).

Obtaining and amplification of the gene LacP83

The sequence of gene LacP83 was obtained from the GenBank database with accession number JF719064 and chemically synthesized (Integrated DNA Technologies, Coralville, IA, USA). For expression, the reading frame was amplified with forward (5’-CACGGATCCTCCAGGCGCACGGATCTCGCTACGCTTACA-3’) and reverse primers (5’-TAATTAAGCTTTCAAGCTATGCCACCTTTGTCGGAATCGCTC-3’) that have recognition sites for the restriction enzymes BamHI and HindIII (underlined in the sequence). The PCR conditions used were: 95 °C for 2 min, 30 cycles of 95 °C for 30 s, 56 °C for 50 s, 72 °C for 2 min, and a final extension at 72 °C for 5 min. In all cases, the genetic material obtained was corroborated by electrophoresis on a 0.8% agarose gel (Sambrook and Russell 2001) with a 1 kb molecular marker (Thermo Fisher Scientific, Waltham, MA, USA).

The amplified DNA obtained from the above step was inserted into the cloning vector pJET 1.2 Blunt (Fermentas Thermo Fisher Scientific, Waltham, MA, USA) following the supplier’s instructions and cloned into E. coli TOP 10. Plasmid purification was performed by alkaline lysis (Sambrook and Russell 2001), and the desired insert was confirmed by a restriction profile.

The obtained DNA from restriction profile was subcloned into the expression vector pQE30 (Qiagen, Hilden, Germany) following the manufacturer’s instructions. The resulting plasmid was introduced into the strain E. coli BL21 using an electroporator (Eppendorf Mod 2510, Hamburg, Germany). The transformed cells were selected, and the plasmid was purified by alkaline lysis (Sambrook and Russell 2001). The presence of the gene was verified by PCR under the conditions described above. The presence of the reading frame of LacP83 in the recombinant plasmid pQEP83 was confirmed by PCR, and after that, the recombinant strain of E. coli BL21 was grown.

The recombinant strain of E. coli BL21 was grown in LB/Amp medium, and the expression of the gene LacP83 was induced by adding IPTG when the culture reached an optical density of 0.5 at 600 nm (approximately at 12 h of culture) (Sugantha et al. 2010). Samples were taken from the induction every hour until 35 h of cultivation, and the biomass was evaluated by optical density at 600 nm in a Cary 300 Bio UV-Vis spectrophotometer (Agilent Technologies, Santa Clara, CA, USA). The kinetic parameters of growth were estimated with the Velhurst-Pearl logistic equation using the non-linear least square-fitting program “Solver” (Excel software, Microsoft, Redmond, WA, USA) (Téllez-Téllez et al. 2008).

Laccase activity was determined at 40 °C in each sample by changes in the absorbance at 468 nm, using 2 mM 2,6-dimethoxyphenol (DMP) in phosphate buffer pH 6.5 as the substrate (Téllez-Téllez et al. 2008). One enzymatic unit (U) of laccase activity was defined as the amount of enzyme that gives an increase of 1 unit of absorbance per min in the reaction mixture. The storage stability of the laccase was tested; the activity after 15 and 30 days storage at 4 °C was assessed. Protein patterns were observed via SDS-PAGE (Laemmli 1970). All chemical compounds for laccase activity and electrophoresis were supplied by BioRad (Hercules, California, USA). 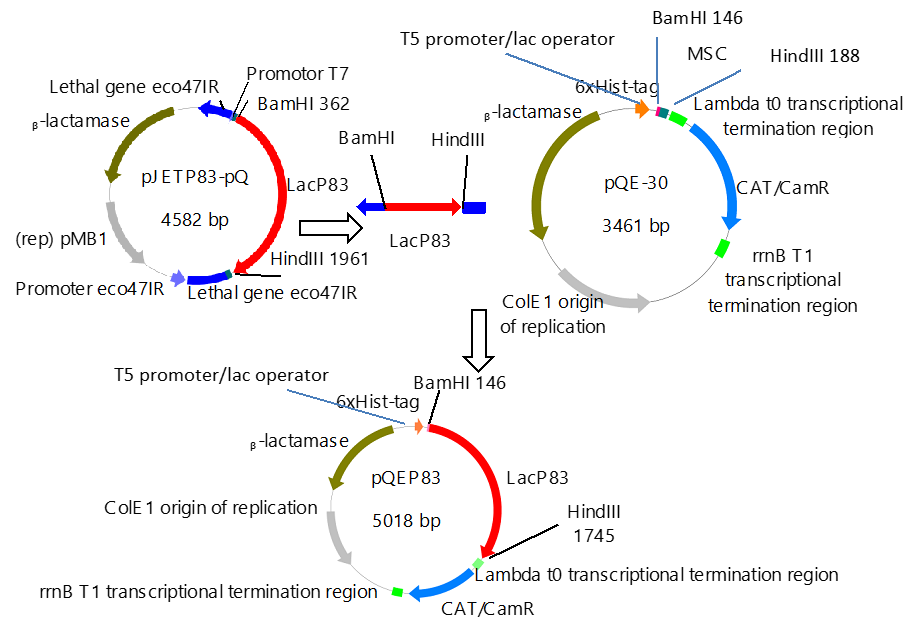 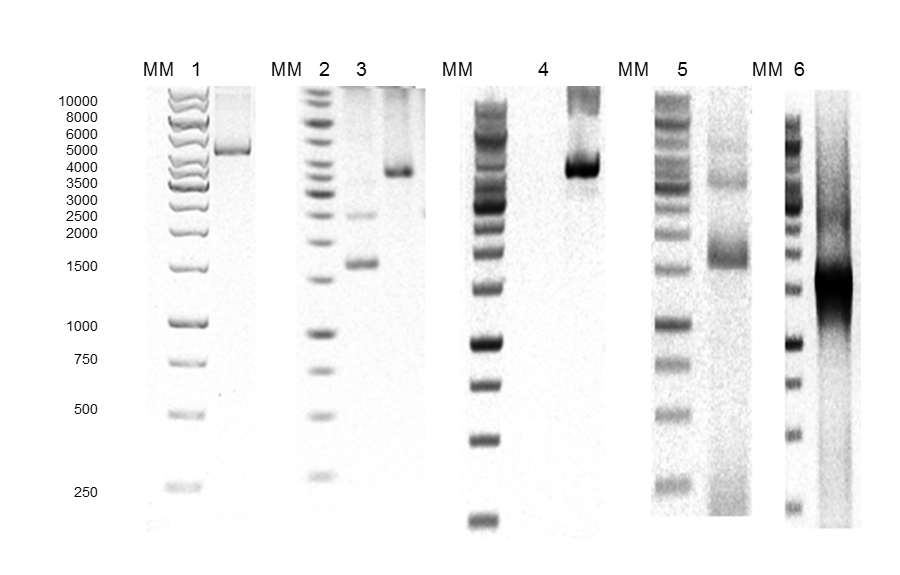 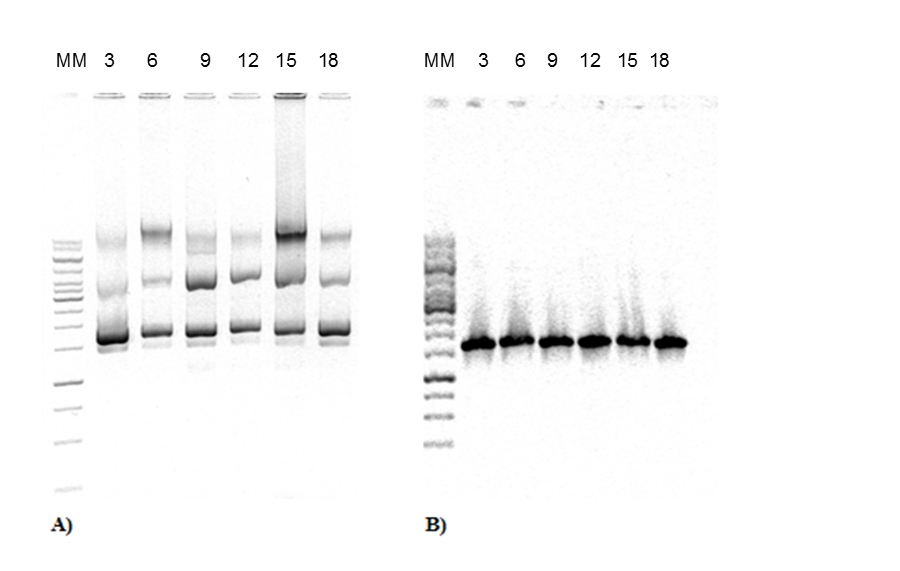 The LacP83 gene encodes for a constitutive laccase in P. ostreatus ATCC-32783 (Téllez-Téllez et al. 2008, 2012) with good catalytic characteristics, showing high stability a changes of pH and temperature in addition, the promoter of the gene presents sequences of response to stress, xenobiotics and metals. However, its production in the wild strain requires more than 20 days so a heterologous system where it is possible to increase its production in less time represents a good option for later studies.

Figure 4 shows the growth of E. coli BL21 recombinant (without induction and with induction). The exponential phase began approximately 7 h after inoculation. However, growth in the presence of IPTG was slower, although the maximum biomass was similar in both cultures after 35 h. In the absence of IPTG, the stationary phase occurred at approximately 18 h of culture, whereas in the presence of IPTG, it was close to 30 h of culture. The specific growth rate (ᶙ) for culture without IPTG was 0.536 h-1 and with IPTG was reduced by approximately 50% (0.244 h-1). A similar result was reported by Wagner et al. (2008), who found a decrease in the growth of E. coli BL21 after the addition of IPTG for inducing a recombinant protein. Vilar et al. (2003) argued that the decline in growth of recombinant strains may be due to changes of induction of lac promoter that affect cell growth. This effect can be inhibited by adding xylose the culture medium as an alternative carbon source (Gálvez et al. 2014).

The activity of the recombinant laccase (LacP83) is shown in Fig. 5. Two activity peaks were observed. The first (1800 U/L) occurred approximately 1 h after induction, and the second (3740 U/L), which was higher, was observed 6 h after the first. Ihssen et al. (2015) reported an activity of 3400 U/L of a laccase obtained from Bacillus licheniformis and expressed in E. coli. It is noteworthy that the laccase activity observed in the present study was 80 times higher than the laccase activity of Aeromonas hydrophila NIU01 expressed in E. coli (Ng et al. 2013). In addition, the value of laccase activity of this work was 2 times higher than that reported by Park et al. (2015), where the Lacc6 gene from P. ostreatus was expressed in P. pastoris, obtaining values of 1560 U/L. The wild strain of P. ostreatus produced 3190 U/L at 144 h of culture (Grandes-Blanco et al. 2013), while in this work, the recombinant strain of E. coli produced a similar activity in 19 h. 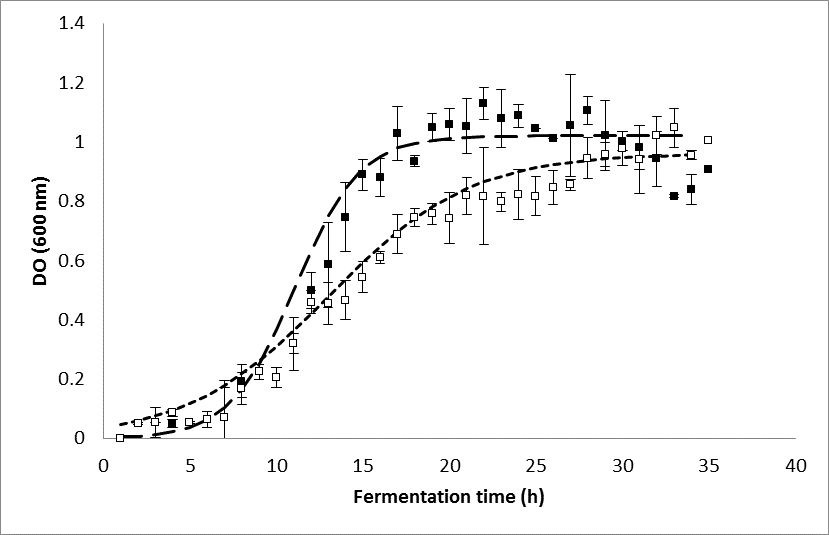 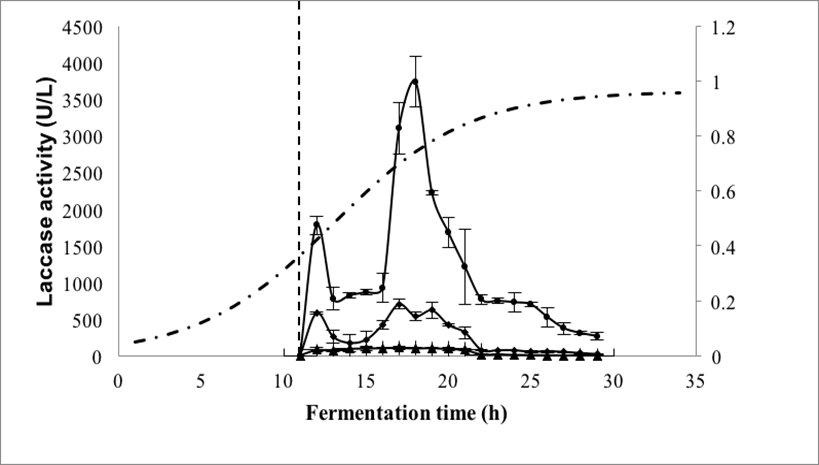 Fig. 5. Laccase activity from recombinant E. coli BL21 added with IPTG. (●) Immediately after sampling; (▪) after 15 days of storage; ◊ after 30 days of storage. (·-·) Cellular growth. The vertical dotted line represents the time of induction with IPTG.

Laccase activity was degraded by storage, losing approximately 90% in 15 days and almost 100% in 30 days at 4 °C. Gunne et al. (2013) suggested that the intracellular accumulation of copper does not allow adequate expression of the protein and that E. coli BL21 does not perform posttranslational modifications efficiently. It is noteworthy that despite this, E. coli grows 16 times faster (μ = 0.536 h-1) than P. ostreatus ATCC-32783 (μ = 0.032 h-1). On the other hand, Alexandre and Zhulin (2000) reported that E. coli produces proteins (PcoA_1073341 and YacK_2506227) with high laccase similarity and Outten et al. (2001) reported that this bacterium presents mechanisms of response to the increase of copper during its growth, which produce multicopper oxidases that are very similar to the laccases. These enzymes do not need to be glycosylated to be functional, which led us to suppose that the non-glycosylated laccases would have activity and stability. One option to reduce this problem would be the co-expression of intracellular chaperone proteins.

Fig. 6. SDS-PAGE of the culture medium during the growth of recombinant E. coli BL21. The number represent the time of sampling. A) Without induction. B) With induction (IPTG). MM: molecular marker.

The authors thank the Mexican Council of Science and Technology (CONACyT) for supporting this research with Project No. 156406 and for the scholarship (No. 241720) awarded to Grandes-Blanco.