However, methane production during anaerobic digestion is often limited by the slow hydrolysis rate and poor biochemical methane potential of DAS (Batstone et al. 2009). For this reason, many technologies including ultrasonic, thermal, alkaline, and microwave pretreatment have been used to improve the rate of hydrolysis of sewage sludge (Gianico et al. 2013; Yan et al. 2013; Riau et al. 2015). These technologies destroy cells and extracellular polymeric substances (EPS) in sludge, resulting in the release of intracellular and extracellular constituents (Lagerkvist and Morgan 2012; Rani et al. 2012). The released constituents are more readily biodegraded during anaerobic digestion and enhance the methane production. Among these pretreatments, alkaline and thermal techniques have been the most well studied in recent years (Lagerkvist and Morgan 2012; Rani et al. 2012; Riau et al. 2015; Zhang et al. 2015b; Guo et al. 2016).

Dewatered activated sludge (19.49% TS) was obtained from the Xianyanglu wastewater treatment plant (Tianjin, China) and stored at 4 °C before use. The inoculum (mesophilic seed sludge) came from an anaerobic reactor and was centrifuged before inoculation. Characteristics of the DAS and inoculum are listed in Table 1.

A pressure bottle with 300 mL volume was used as the digestion reactor. There were 10 parallel reactors for each pretreatment, and each reactor was fed with 75 g DAS and 25 g inoculum. After feeding, oxygen in the reactors was removed by flushing with nitrogen gas for 5 min, and then the reactors were sealed with butyl rubber stoppers. The duration of mesophilic anaerobic digestion was 30 days at 37 ± 1 °C. Methane production was determined every day before day 21 and every two days after day 21, and the volume of biogas produced was calculated based on pressure measurements. The sludge in one parallel reactor for each pretreatment was sampled every three days to measure parameters in the sludge.

Dewatered activated sludge was heated at 105 °C for 24 h determine TS content, then at 550 °C for 4 h to determine volatile solids (VS) content. The soluble fraction of DAS was obtained by centrifuging the DAS at 10,000 rpm for 10 min at 4 °C and then filtering the supernatant through a microfiber membrane with a pore size of 0.45 µm. The concentrations of SCOD, ammonia nitrogen, soluble carbohydrates, and proteins were analysed using the dichromate reflux method (CODCr), Nessler’s reagent spectrophotometry, the Anthrone method, and the Coomassie Brilliant Blue method, respectively (APHA 1998). Prior to VFAs analysis, the supernatant was acidified by formic acid to adjust the pH to approximately 3.0. Then VFAs were analysed on the Thermal Trace-1300 gas chromatograph equipped with a TR-FFAP column (length 30 m, diameter 0.53 mm) and a flame ionisation detector. The biogas composition was analysed using a Thermal Trace-1300 gas chromatograph (Thermo Scientific, Waltham, MA, USA) equipped with a molecular sieve column (length 2 m, diameter 2 mm) and a thermal conductivity detector. The pressure in the reactors was measured by pressure gauges (GMH 3111, Greisinger, Regenstauf, Germany).

Effects of Pretreatment on Substrate

Changes in SCOD during anaerobic digestion

Soluble COD was periodically monitored during anaerobic digestion over the 30-day study period. During anaerobic digestion, there were two parameters affecting the SCOD concentration. The COD in substrate was dissolved into SCOD under the function of exocellular enzymes in hydrolysis and acidification; however, SCOD in substrate could be converted into methane and carbon dioxide by microorganisms (Fang et al. 2014).

The results indicated that thermal pretreatment disintegrated complexes and poorly biodegradable compounds (cell membrane, proteins, etc.) to simpler and readily biodegradable compounds, resulting in greater sludge degradation and high SCOD (Wang et al. 2005a). The low SCOD concentration in the alkaline pretreatment was presumably due to the alkali dose being too low to sufficiently degrade the DAS (Rani et al. 2012). After 15 days, the SCOD concentration was maintained at an almost constant level in all treatments, as noted previously (Feng et al. 2015). The reason may be that the methanogenic activity decreased during anaerobic digestion, resulting in a decline in SCOD biodegradation.

Changes in soluble proteins and carbohydrates during anaerobic digestion 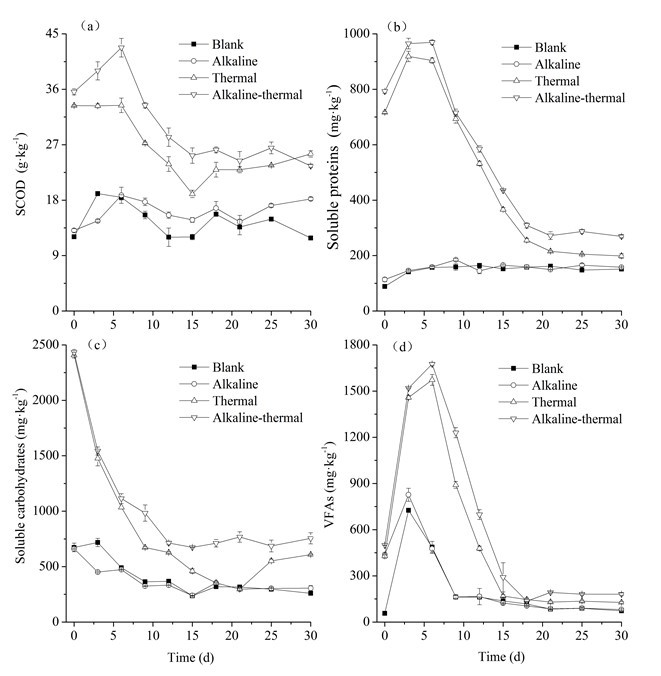 Fig. 1. Changes in the concentration of a) SCOD, b) soluble proteins, c) soluble carbohydrates, and d) VFAs during anaerobic digestion

Changes in VFAs during anaerobic digestion

Changes in ammonia nitrogen and TCOD during anaerobic digestion 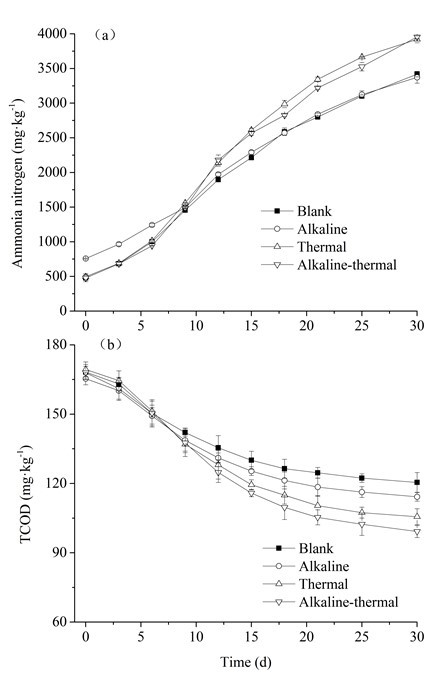 Fig. 2. Changes in the concentration of a) ammonia nitrogen and b) TCOD during anaerobic digestion

The TCOD concentration gradually decreased during anaerobic digestion for all treatments (Fig. 2b). The concentration of TCOD in the control was reduced by 28.40%, the smallest reduction among the four treatments, while alkaline-thermal pretreatment showed the greatest reduction (40.92%). These results indicated that alkaline-thermal pretreatment contributed to biodegradation of the sludge during anaerobic digestion. In the first 9 days of anaerobic digestion, there was no obvious difference (p < 0.05) between any of the treatments, as there was enough readily degradable material in substrate in all treatments to be used by microorganisms. After 9 days, with the decline in readily degradable material in substrate, the degradation rate of TCOD gradually decreased. The amount of readily degradable material in the thermal and alkaline-thermal pretreatments was higher than in the control and, therefore, the reduction in TCOD in those treatments was greater than in the control.

Figure 3b shows changes in CO2 content, which displayed the same trend as methane. However, the CO2 content in the thermal and alkaline-thermal pretreatments was obviously higher than in the others between days 3 and 6. Acidification occurred in the substrate on those days due to the high VFAs concentration. Afterwards, the anaerobic digestion conditions recovered, and the CO2 content declined to approximately 35%.

The first-order kinetics model and a Gompertz model show a good fit to the biogas production curve for anaerobic digestion, corresponding to the rapid breakdown of readily biodegradable compounds followed by a much slower degradation of poorly biodegradable organic matter (Rao et al. 2000). These models were selected to estimate the process of methane production from anaerobic digestion of DAS in this study. CMY was described by the first-order kinetics model based on Eq. 1 and the Gompertz model based on Eq. 2, 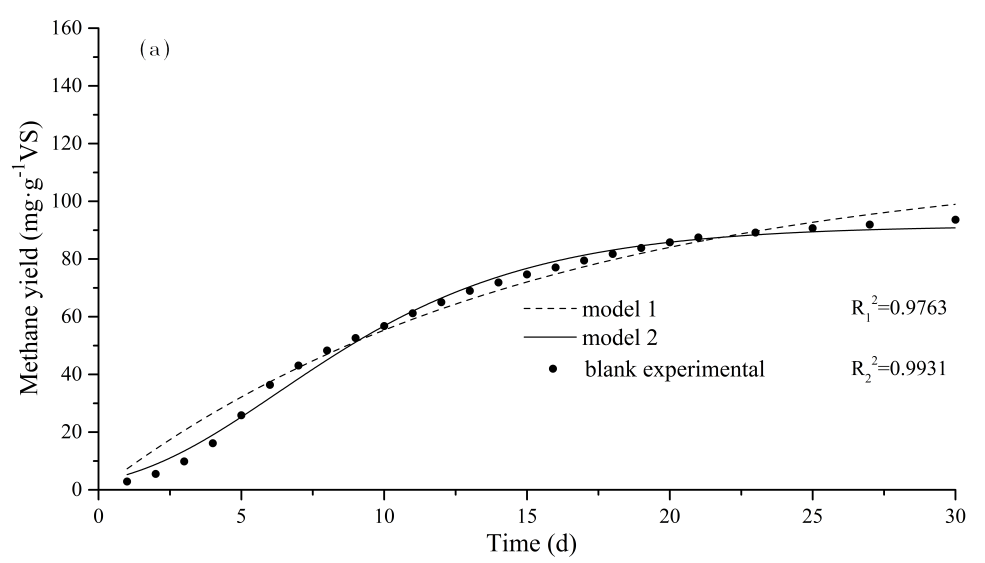 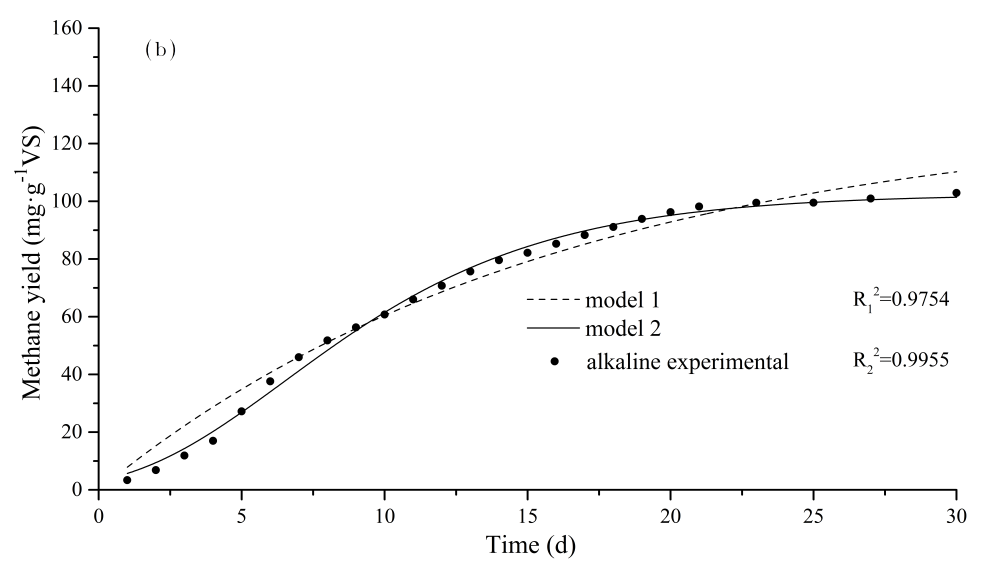 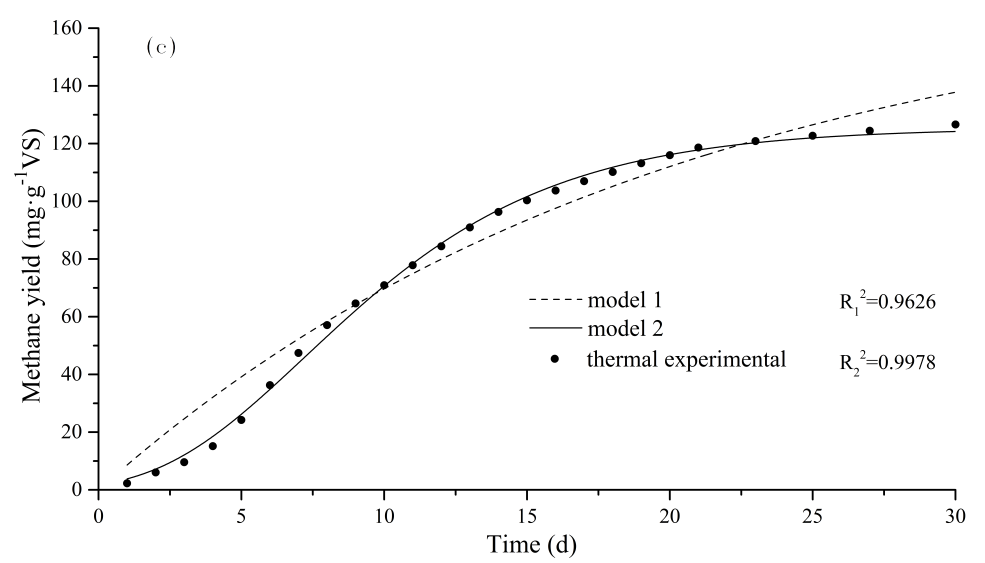 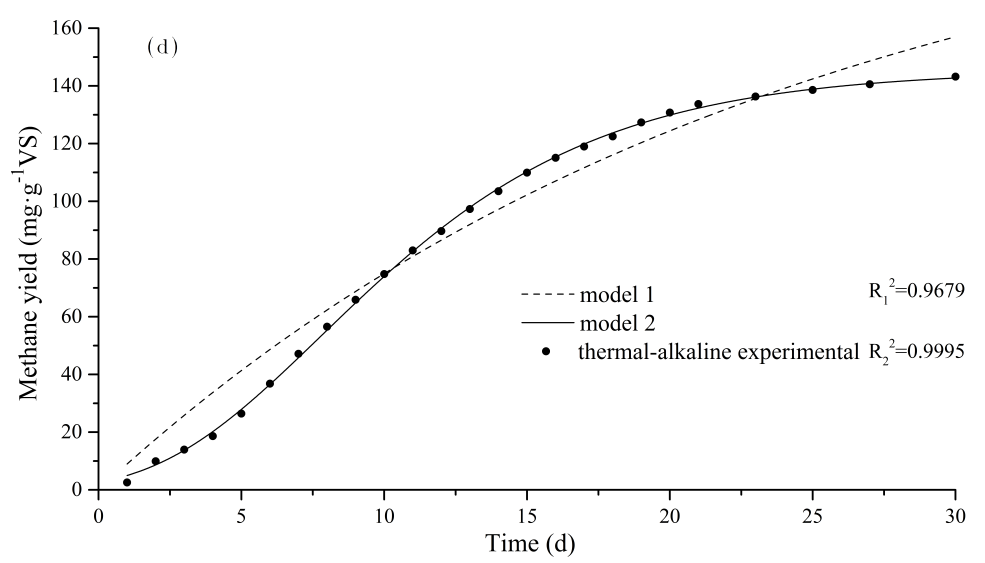 This research was funded by the Special Fund for Agro-scientific Research in the Public Interest (201303101) and the National High Technology Research and Development Program of China (2014BAL02B04). The authors would like to thank the Agro-environmental Protection Institute, Ministry of Agriculture for their financial support and also acknowledge Xianyanglu wastewater treatment plant for its assistance in supplying DAS for this research.