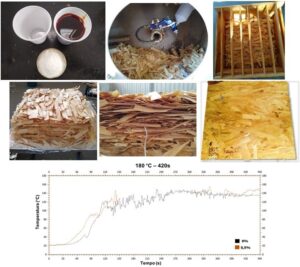 For greater durability, materials must withstand contact with water, making it difficult for biodegrading agents to attack. The present study produced and evaluated the heat transfer for two pressing times and the physical properties of OSB panels, produced with pinewood strands and Al2O3 nanoparticles addition. The nanoparticles were synthesized through the sol-gel-protein method and added to the resin in the proportion of 0.5%. During the pressing process, heat transfer and distribution in the central region of the particle mat were evaluated using a type K thermocouple. After its fabrication, the panels were characterized to evaluate density, moisture content, thickness swelling, and water absorption. The results obtained indicated that the nanoparticle addition caused a refractory effect in the central region of the mat, leading to a small reduction in the pressing temperature for the 600 s cycle. However, there was no compromise in resin cure, indicating good interaction of the panels with nanoparticles in water contact, for both pressing times. There was an improvement in the panel thickness swelling with the addition of 0.5% of Al2O3 nanoparticles, with all properties meeting the Class 1 indicators of the EN 300 (2006) standard.

For greater durability, materials must withstand contact with water, making it difficult for biodegrading agents to attack. The present study produced and evaluated the heat transfer for two pressing times and the physical properties of OSB panels, produced with pinewood strands and Al2O3 nanoparticles addition. The nanoparticles were synthesized through the sol-gel-protein method and added to the resin in the proportion of 0.5%. During the pressing process, heat transfer and distribution in the central region of the particle mat were evaluated using a type K thermocouple. After its fabrication, the panels were characterized to evaluate density, moisture content, thickness swelling, and water absorption. The results obtained indicated that the nanoparticle addition caused a refractory effect in the central region of the mat, leading to a small reduction in the pressing temperature for the 600 s cycle. However, there was no compromise in resin cure, indicating good interaction of the panels with nanoparticles in water contact, for both pressing times. There was an improvement in the panel thickness swelling with the addition of 0.5% of Al2O3 nanoparticles, with all properties meeting the Class 1 indicators of the EN 300 (2006) standard.

Brazil is one of the countries with the greatest geo-climatic diversity in the world, which, when combined with technological investments and the availability of fast-growing forests, results in an outstanding economic potential in the timber segment. The wood panel sector plays an important role in the domestic and foreign market, with constant technological evolution and improvement in product quality. With wide application in civil construction, oriented strandboard (OSB) is composed of wood strands partially oriented in perpendicular layers (Fig. 1).

Although this type of panel is already prominent in the market, developing a more sustainable and rational material that meets the needs of the industrial segment and guarantees the same durability and characteristics presented by competing materials is essential (Lima et al. 2018).

Nanoscale materials are a new technological trend that may reveal new behaviors and properties, making nanoparticles a promising material with ease of deployment in this sector (Silva et al. 2021). According to Lima et al. (2022), the properties and characteristics of the material used on a nanometric scale are defined by the modification caused in the arrangement of atoms and molecules by reducing their size, improving the physical and chemical properties of the material. Unusual changes occur in the properties of a solid when its grain size is reduced to the nanometric scale (Taghiyari 2011).

Optimal use of nanoparticles in resins is essential to achieve the highest mechanical, physical, and thermal properties, as well as other custom characteristics (Haq et al. 2008). Nanoparticles have a number of attractive properties, including the ability to penetrate deeper into more porous materials such as wood (Zhao et al. 2020). Thus, nanotechnology represents a great opportunity for the forest products industry to develop new products and a growing attraction is observed in the investigation of nanocomposite materials (Salari et al. 2013).

According to Mantanis and Papadopoulos (2010), the reduced size of the nanoparticles of nanotechnology compounds makes them penetrate deep into the wood, effectively altering the surface chemistry, resulting in high protection against moisture.

Zhao et al. (2020) analyzed the potential of adding copper oxide (CuO) nanoparticles to phenol-formaldehyde resin when producing OSB panels. Four concentration ratios, 20, 30, 40, and 50% of the copper solution were tested to form the material at the nanometer scale. Although most properties did not suffer major effects, there was a significant reduction in the thickness swelling of the OSB panels.

Aluminum oxide nanoparticles have been used as a reinforcing filler in polymeric composites for various purposes, and concentrations below 5% by weight can improve the strength, abrasion, thermal conductivity, and electrical resistivity (Koli et al. 2014). However, Zhang et al. (2018) state that little research has been carried out on phenol-formaldehyde resins, reinforced by alumina, as adhesives for wood.

This study evaluated the application of nanoparticles in the production of OSB panels to improve thickness swelling and other physical properties such as water absorption. The goals were to make the product less susceptible to biodegrading agents, to allow panels to be applied with greater water contact, and to reduce the pressing time.

The OSB panels used in this research were made in São Paulo State University, the campus of Itapeva. They were made of Pinus spp. pieces donated by a wood company in the region, phenol-formaldehyde adhesive (solid content of 56% and viscosity of 300 cP), and deionized water.

Nanoparticles were prepared via the protein sol-gel process (Favarim and Leite 2018). Briefly, gelatin (protein source) was dissolved in distilled water at 30 °C; the same amount of aluminum nitrate was added and mixed with constant stirring at 70 °C. The gel formed after 8 to 9 h. The material was dried in an oven, at 103 ± 2 °C, forming a spongy-looking structure due to the elimination of water and carbonization of the gelatin polymeric structure. Soon after, the material was crushed and transformed into ash in a muffle furnace, followed by a calcination step at approximately 800 °C for 3 h, where there was crystallization and formation of the nanoparticulate material.

To produce OSB panels, the pinewood boards were chipped, using a rotary chopper, classified, and dried in an oven up to 3% moisture content. For each panel manufactured, 1500 g of strands were used, distributed according to EN 300 (2006) in three layers, the external layers were aligned and parallel to the board length and the internal layer was aligned at right angles to the strands in the external layers.

The physical tests performed were density, moisture content, thickness swelling, and water absorption. They followed procedures indicated by different standards for wood-based panels, both national and international. In addition, an analysis of the internal temperature of the panels during the pressing cycle was performed, using a data acquisition device and a type k thermocouple, collecting 10 data items per second. Ten samples were prepared for each test, as indicated by the standards EN 300 (2006), EN 310 (2002), EN 322 (2002), EN 323 (2002), and EN 326 (2002).

Analysis of variance was performed, followed by the Tukey test when the statistical difference between the means was verified. A level of 95% of reliability and 5% of significance was considered.

Figure 2 shows the temperature variation during cycles of 600 and 420 seconds, both for OSB panels without the addition of nanoparticles and with 0.5% of nano Al2O3. At the beginning of the cycle, both treatments presented a very similar behavior, including the panels with nanoparticles addition, as they presented a smoother, more constant temperature rise ramp, which caused less interference in the strand curing process. This ensured a more even distribution of heat, which can influence physical properties.

The graph shows an average of the temperature obtained for the panels produced. The press opening causes interference in temperature measurements due to pressure reliefs, resulting in discrepancies identified. Silva et al. (2019) verified the same behavior.

However, after the press opening and pressure relief were carried out to eliminate the process vapors, the panels produced with nanoparticles showed greater interference, with great oscillation and temperature reduction. This behavior was a consequence of possible resin concentration points with the alumina nanoparticles, which in imaging tests showed variation in their size and shape heterogeneity, affecting wood conductivity.

Despite this, the final temperature inside the panels in both cycles, respectively close to 145 and 165 °C, were adequate, as they guarantee the adhesive curing that occurs from 140 °C onwards (Iwakiri 2005). Thus, although the addition of nanoparticles does not directly interfere in the final pressing temperature of the panels, they influence the form of heat distribution and concentration during the cycle and the entire process of loss of steam, drying, and curing of the OSB, consequently impacting in the panel physical properties.

Tables 1 to 4 present the average results obtained for the physical tests of density, moisture content, thickness swelling, and water absorption for all specimens. The results were within the normative specifications and other studies.

The analysis of variance performed showed a P-value of 0.018 for the samples produced with nanoparticles, showing that the results differed statistically from the panels produced without nanoparticles. The addition of nanoparticles was the only factor to show statistical significance. This behavior can be explained by the fact that the alumina nanoparticle has lower thermal conductivity with increasing temperature and a more significant refractory effect for longer pressing times. Thus, the faster curing of some parts of the panels prevented their full compaction, consequently causing a lower density (Silva et al. 2019).

Besides the compaction level and density of the panels, the faster curing of parts of the panel also affected its water loss. There was an increase in the OSB panel moisture content with the addition of nanoparticles.

The analysis of variance performed for the thickness swelling test revealed a P-value of 0.042. Thereby, “T600_5” and “T420_5” presented better results with respect to water contact. The improvement in this test can be explained by the accelerated curing of the outermost regions of the panel, which with the addition of Al2O3 nanoparticles with its thermal insulating characteristic, prevent a high volumetric variation of the material and interfere with the density of the panels.

For Mendes (2005), the improvement in thickness swelling may be related to the density and compaction ratio, since by changing these variables, the compressive stresses present in the wood panels are altered. Silva et al. (2019) presented very similar results when analyzing MDP panels with the addition of ZnO nanoparticles.

Despite the improvements, the water absorption test ended up showing opposite results with a percentage increase of almost 24%. No statistical difference was found between the results, and it is possible to say that none of the analyzed factors significantly influenced the absorption of the panels. For Zao et al. (2020), the addition of nanoparticles does not cause absorption variation. Therefore, it is still necessary to make some adjustments in the production process. As this was the only test that showed a negative interaction of the Al2O3 nanoparticles with the OSB panel, it should not be considered a limiting factor to product development.

The most coherent explanation is that with the decrease in density, a consequence of less structural compaction of the panels, there was less difficulty in water penetration, causing an increase in absorption in some panel points. However, this did not significantly affect the other properties, such as thickness swelling, for example, which, due to the acceleration of the resin curing process and less material displacement, ended up decreasing.

Fig. 3. Interaction graphics of panels with 0% and 0.5% nanoparticles for all tests performed.

By means of the interaction graphs (Fig. 3), it is possible to highlight not only the lower values of density and thickness swelling to “T600_5” and “T420_5” but also the decreasing trend in all tests with increasing pressing time. For the absorption test, despite not showing any difference, the slope and behavior of the curve indicate that there may be a certain positive interference (decrease) for this property as well.

The authors are grateful for the support and coordination from the Improvement of Higher Education Personnel (CAPES).

EN 310 (2002). “Wood-based panels – Determination of modulus of elasticity in bending and of bending strength,” European Committee for Standardization, Brussels, Belgium.