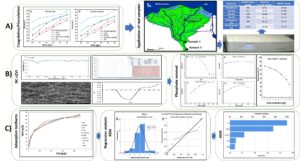 Phosphorus represents organic phosphates, orthophosphates, and polyphosphates (Khan et al. 1997). The main cause of eutrophication is the increase in phosphorus concentrations. The source of phosphorous could be from phosphate rocks as well as from some solid wastes (Koble and Corrigan 1952; Knight et al. 2013). Eutrophication, besides its environmental impact, has some economic merits as a fertilizer (Yuvakkumar et al. 2011; Mahmoud et al. 2018).

Cellulose is one of the most abundant biodegradable polymers. It has a high effective hydroxyl group ratio. Cellulose consists of repeated β-D-glucopyranose units. Various techniques have been used to prepare nanocellulose fibers, namely cellulose nanocrystals and nanofibrillated cellulose. Plant cellulose is mainly composed of amorphous chains and crystalline domains. Nanocellulose is produced by acid hydrolysis (such as sulfuric, hydrochloric, and phosphoric acids) of the cellulose fibers. Nanocellulose obtained from plants is 5 to 70 nm in width and 100 to 250 nm in length. The type of acids used can affect the colloidal stability of nanocellulose. Nanocellulose can be used as catalytic degradation and disinfection as well as high/ active surface area and high aspect ratio as good flocculants (Mahmoud et al. 2019a,b,c). The high mechanical strength of nanocellulose increases stiffness and acid/base resistance, and these attributes give it the possibility for use in different operating conditions. Also, nanocellulose has high surface free energy that can decrease bio-fouling. The adjusting of the medium pH increases the separation of nanocellulose from its colloidal behavior. Many studies have considered the effectiveness of nanocellulose effectiveness for wastewater treatment, including dyes and metal sorption and also the adjacent material in filters and membranes in water treatment systems (Mahmoud et al. 2017a,b).

Nanocatalytic materials, such as zero-valence metal, semiconductor materials, and bimetallic nanoparticles, are used in wastewater and water treatment due to their high reactivity and surface area (Meda et al. 2007). Several studies have been conducted to study the effect of using magnetic nanocomposites, such as nanocellulose-nano zero-valent iron (NC-nZVI) in the removal of inorganic cations and anions, as well as organic compounds, as shown in Fig. 1 (Almeelbi and Bezbaruah 2012; Mahmoud and Mahmoud 2021b).

This paper focused on the use of nanocellulose as a flocculent agent for the treatment of contaminants in water. Nanocellulose was compared with other agents, analyzing nanocellulose removal efficiency of water contaminants and the integrated behavior of NC-nZVI, on phosphorous removal under different operating conditions. Also, the adsorption mechanisms were estimated by applying nonlinear adsorption isotherm models. Finally, regression analysis was employed to detect the response surface relations between the operating variables and removal efficiency.

Synthesis of nZVI was done using ferric chloride dissolved in ethanol 4:1 (v/v) and sodium borohydride black. Solid particles of nZVI were formed as in Eq. 1 (Bezbaruah et al. 2011). To prevent the rapid oxidation of nZVI, washing with absolute ethanol was completed. Finally, the synthesized nZVI was dried overnight at 50 °C (Cumbal and SenGupta 2005).

The prepared NC-nZVI sample was investigated using a Philips Quanta 250 FEG device manufactured by Philips Electronics Company, USA. This was utilized for performing the scanning electron microscopy (SEM) analysis. The SEM instrument operates at a magnification of 80,000x and a voltage of 20 KV. FTIR was analyzed before treatments using FT/IR-6100typeA, S/N A009061020 with a standard light source and TGS detector. The FTIR resolution was 8 cm-1, using a 10000 Hz filter. The SEM and FTIR instruments were located at the National Research Center (NRC). Particle size distribution analysis was conducted for dried samples by using Microvision (particle size measurement) located at CID Company for pharmaceutical industries, Egypt using µ u-tech production, and model VGA-410 France.

Samples were collected from contaminated sites in plastic bottles. All analyses were carried out within 8 h of collection at Housing and Building National Research Center (HBRC) laboratories (Cairo, Egypt) (Bezbaruah et al. 2011). Three raw water samples were collected. These came from Ismailia Canal, located east of the Delta, at latitude 30°06’41” N and longitude 31°16’22” E, from the Damietta branch at latitude 30°36’15” N and longitude 31°15’39” E, and from a wastewater treatment plant after the primary screens (WWTP) which is located at Helwan Governorate, Egypt.

where Qe is the equilibrium adsorption capacity (mg/g), V is the volume of solution (L), and m is the dry weight of the adsorbent (g).

A linear regression analysis was employed to estimate the relation between removal efficiency and operating conditions (pH, dose, contact time, stirring rate, and concentration) on phosphate removal efficiencies as presented in the general equation, Eq. 4. The coefficient of determination statistical measure (R2 value) was used to evaluate the accuracy of the model. The t-test was also used to assess the statistical significance by looking at the p values,

where Y(PO43-) is the predicted response of removal efficiency (%).

Fig. 2. Effect of different flocculants agents on A) TSS Removal and B) Turbidity removals

Table 2. Effect of Nanocellulose on Treatment of Water Samples

Shimadzu S 201 PC spectrophotometer – Tokyo, Japan was used for infrared spectroscopy. The sample was prepared as a disc (2 mg sample + 200 mg spectroscopy KBr). The surface of the NC-nZVI composite had high ratios of OH– groups that can combine easily with other active functional sulfate esters, carboxyl, amine, and aldehyde groups, as shown in Table 3 and Fig. 3.

The obtained SEM results indicated the formation of Nanocellulose-Nano Zero Valent Iron Composite (NC-nZVI) as fiber with a size ranged between 18 and 26 nm, as shown in Fig. 4.

Particle size distribution was tested for NC-nZVI from 0 to 30 µm, as shown in Fig. 5. The obtained results indicated that 94% of the prepared NC-nZVI sample was within 50 nm.

Fig. 6. Point of Zero Charge of the NC-nZVI sample

Depending on the electrostatic repulsion phenomenon, the aggregations increased at PZC and decreased up and down. Also, the accumulation of sorbent materials affect the reactivity due to the decrease in the surface area (Ross and Schatz 2014).

The effect of the adsorbent dose was studied at 0.1, 0.2, and 0.3 g for phosphorous removal by using NC-nZVI. An initial phosphorous concentration of 5 mg/L was used. At medium pH 3.5 and stirring rate 50 rpm with a contact time of 15 min, the removal efficiency was 69, 94, and 100%, respectively for the studied NC-nZVI doses as shown in Fig. 7c.

Effect of the initial phosphorous concentration

At room temperature, nonlinear relations between isothermal models were considered to describe the removal mechanism, as in Fig. 9. The studied isotherms models were the Redlich-Peterson model, Hill model, Sips model, Khan model, Toth model, Koble-Corrigan model, Javanovic model, Freundlich model, and Langmuir model. The results showed that the NC-nZVI composite was well described by the Sips model (∑ errors: 7.932), as shown in Table 4. The Sips model describes a heterogeneous adsorption isotherm process, which combines Langmuir and Freundlich models. This model tends to approximate the Freundlich model at low concentration and to solve the Freundlich limitation at high concentration through applying the Langmuir adsorption model in the prediction of monolayer adsorption showing the maximum uptake is 105.3 mg (PO43-)/g (NC-nZVI).

Table 5 describes the positive linear effect of the independent variable “pH”, and “dose” on phosphate removal was observed to be significant (p< 0.05). However, an insignificant effect (p> 0.05) was determined for the linear terms of “time”, “stirring rate” and “initial concentrations”. The coefficient of determination between measured data and simulated results (R2) and adjusted R2 existed in Table 5. The significant result of the linear RSM model agrees with the obtained ANN model (Fig. 11) – nonlinear feed-forward backpropagation neural networks – to describe the most significant operating parameters (p-value equal 0.00 for the effect of dose and pH) for phosphate removal using NC-nZVI. By applying Eq. 4, the removal equation appears. The removal equation can be used to control the removal percent by minimizing or maximizing the operating variables using all obtained results not restricted to the optimum conditions,