Moso bamboo (Phyllostachys pubescens Mazei ex H. de Lebaie), one of the most commonly used species in China, is a strong and stiff material. In this paper, the manufacturing process for glued bamboo laminate (GBL) is presented. The mechanical properties of GBL (compression strength, bending, tension, and shearing) were tested. Results indicated that the mechanical properties of GBL were significantly different for different grades of GBL, but that the performance of GBL was controllable. The edge butt joint greatly influenced the tensile performance, but the butt joint had little impact on the bending performance. In addition, the good mechanical performance of GBL is sufficient for engineering members, making it a potentially useful bamboo product for engineering.

Moso bamboo (Phyllostachys pubescens Mazei ex H. de Lebaie), one of the most commonly used species in China, is a strong and stiff material. In this paper, the manufacturing process for glued bamboo laminate (GBL) is presented. The mechanical properties of GBL (compression strength, bending, tension, and shearing) were tested. Results indicated that the mechanical properties of GBL were significantly different for different grades of GBL, but that the performance of GBL was controllable. The edge butt joint greatly influenced the tensile performance, but the butt joint had little impact on the bending performance. In addition, the good mechanical performance of GBL is sufficient for engineering members, making it a potentially useful bamboo product for engineering.

Bamboo is a group of woody plants that belong to the Poaceae family and Bambusoideae subfamily. Increasing interest in bamboo is due to the decline of available timber resources and increase in wood demand. Bamboo has similar environmental characteristics and comparable physical and mechanical properties with wood, and its fast growth characteristics are an important incentive. Bamboo can grow 15 to 18 cm per day and reach its full height and girth in a single growing season. Also, bamboo can be harvested in 3 to 6 years (Lee et al. 1994). In short, bamboo can be an alternative raw material to meet the demand for wood.

Among several hundred species of bamboo in China, moso bamboo is one of the most commonly used species. The total area of moso bamboo forests in China is 4,430,000 hm2, which occupies about 74% of the total bamboo forest area. Moso bamboo is a strong and stiff material with a modulus of rupture (MOR) ranging from 97.9 to 137.9 MPa and corresponding modulus of elasticity (MOE) ranging between 9000 and 20,700 MPa (Mahdavi et al. 2011).

Bamboo in its natural form is a hollow tubular structure (Liese 1987), which gives it high efficiency in resisting bending forces. However, its natural structure is also the largest impediment to its use because of the difficulty in making connections. Moreover, its hollow structure and small diameter relative to trees prevent its use in large structures.

However, previous research has not touched upon the matters of engineered materials. Although bamboo scrimber exhibits a better uniformity performance and dimensional stability to some extent, the bamboo bundle processing is not strictly repeatable. The properties of bamboo bundles and their final products are not likely controllable. In addition, the properties of bamboo vary greatly depending on the species, soil and climactic condition, silvicultural treatment, age, density, and position in the culm (Lee et al. 1994; Yu et al. 2008). When materials are manufactured using highly variable raw materials without appropriate design, the variability in properties increases remarkably. A common method to control the performance variability of products made of natural raw materials is grading of the raw materials; this can also make the best use of the raw materials.

The present research designed a repeatable processing method to control the properties of glued bamboo laminates. Dimension bamboo strips sawn from bamboo culms were graded according to their density. Then, bamboo strips of the same grade were glued vertically with butt joints homogeneously distributed to form a glued bamboo laminate, which could be used as a dimension lumber in glulam.

Four year-old moso bamboo culms were obtained from Xinchang County, Zhejiang Province, China. The culm diameter at breast height ranged from 100 to 120 mm, and the average thickness of culm walls was 10 to 12 mm. The moisture content of the culms was conditioned between 8% to 12% in a kiln. Then, dimension bamboo strips of 2100×20 × 6 mm (length × width × thickness) were manufactured in a series of processes, such as splitting, planning, and sawing, as shown in Fig. 1. Figure 2 shows more details of the two main processes in preparation of dimension bamboo strip.

PF resin was purchased from Beijing Dynea Chemical Industry Co. Ltd. (China). The properties of PF were shown in Table 1.

Dimension bamboo strips were glued after immersing them in PF. Strips were arranged with butt joints in the longitudinal direction and overlaid in the radial direction, and a distance between two adjacent butt joints was 300 mm. (Fig. 3). In this way, the structure and mechanical performance of GBL would be even. 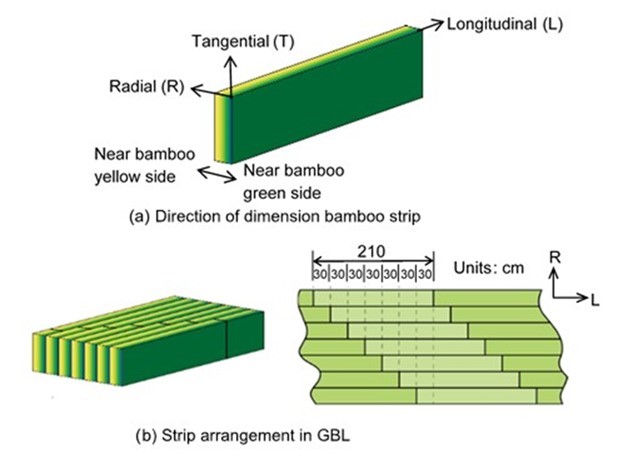 Prior to testing, all specimens were conditioned in a climate chamber with the relative humidity of 65% at 20 °C for more than three weeks. According to the standardized test method ASTM D143 (2007), static bending, compression, tension, and shear tests were conducted. The bending, compression, and shear tests were conducted on an Instron universal testing machine (Instron, series 5582; Norwood, MA). Also, an MTS universal testing machine (Eden Prairie, MN) was used for tension tests. One way variation analysis (ANOVA) with 95% confidence was made between grade and bending and tensile properties.

The specimens were 42 mm × 17 mm in section and 300 mm in length. The load was applied at the center of a 240-mm span with a displacement rate of 2.5 mm/min. The failure load was recorded and the modulus of rupture (MOR) calculated. In addition, the butt joint was located at the center of the span to investigate the lowest bending strength of the laminate. Samples with and without butt joints were tested to evaluate the influence of the butt joint on the bending performance (Fig. 5). Twenty specimens with butt joints and 20 specimens without joints were tested among each grade, and the test set-up can be seen in Fig. 7 (a). 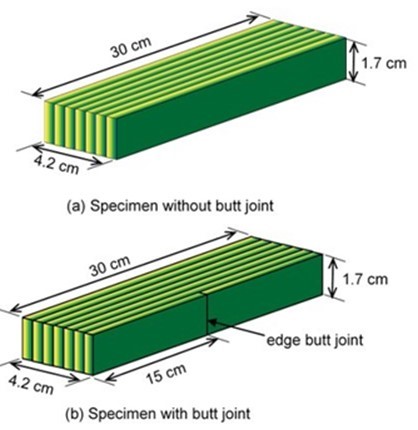 Fig. 5. The size of the specimens in bending performance test

(b) Compression parallel to the grain

The specimens were 17 mm × 17 mm in section and 50 mm in length. A bearing plate was used to apply a continuous compression load with a displacement rate of 0.3 mm/min. The load was applied until deformation equal to 5% of the specimen thickness was reached, and the stress at that point was calculated. Ten specimens of each grade were tested. The set-up is illustrated in Fig. 7(b).

(c) Shear parallel to the grain

Dimensions of the specimen as well as the test setup are shown in Fig. 6. The load was applied continuously throughout the test at a displacement rate of 0.6 mm/min. Ultimate shear stress was calculated. Ten specimens from each grade were tested. The set-up is shown in Fig. 7 (c). 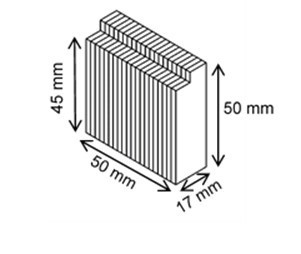 (d) Tension parallel to the grain

The specimen was 17 mm × 42 mm in section and 800 mm in length, with an edge butt joint at middle of the length (Fig. 8). The test was conducted at a displacement rate of 0.9 mm/min. The butt joint in the laminate was placed at the edge of the specimens, which revealed the lowest tension performance of the laminate. Ten specimens from each grade were tested. 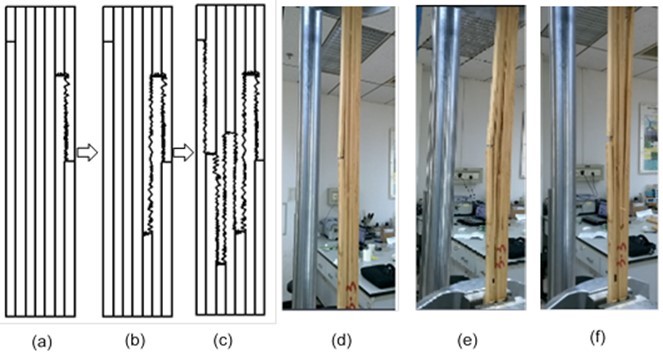 Figure 10 shows the failure propagation of the tensile specimens. The failure began in the edge butt joints. The shear failure occurred first in the outmost part, as illustrated in (a) and (d). As the crack grew, the tensile failure occurred at a certain point and resulted in shear failure in the inner part, as shown in (b) and (e). In this way, the failure developed and the specimen was eventually destroyed, as seen in (c) and (f).

The MOE and MOR of GBL compares well with previous research on laminated bamboo products (Yu et al. 2008; Mahdavi et al. 2011). To compare with dimension lumber of commercial species, it is necessary to convert the average values to allowable values. In addition, the edge joint in GBL greatly influenced the tensile performance, so it is necessary to evaluate its impact on bending performance.

where Rck is the characteristic value; R0.05 is the 5th percentile value (i.e., Mean – 2 × standard deviations); m is the mean of all values from the test data; s is the standard deviation; N is the number of tests (at least 10); σall is the allowable bending stress; G is the modification factor for differences between laboratory and practice conditions, with a default value of 0.5; D is the modification factor for duration of load (1.0 for permanent loads); and S is the safety factor, with a default value of 2.25.

Using Eq. 1, the characteristic values for bending stress of all grades were calculated and then substituted into Eq. 2 to obtain the allowable bending stress, as presented in Table 5. Also, these were compared to an allowable value for bending stress for 2 × 6 in. selected structural Douglas fir, i.e., 13.5 MPa (FPL 2010). The corresponding Douglas fir MOE was 13000 MPa, as presented in Table 5. The lowest MOR from Grade 7 was 13.83 MPa, which was approximately equal to the MOR of Douglas fir. Also, the highest MOE from Grade 2 was lower than that of Douglas fir.

Influence of Butt Joints on the Bending Performance

Butt joints in current research influenced the bending performance, similar to knots in dimension lumber. As Figs. 11 and 12 show, the bending MOR and MOE of the laminates was expected to be the lowest because of the edge butt joints in specimens. The MOE and MOR of laminates with butt joints at the center of the span decreased compared with those without butt joints. 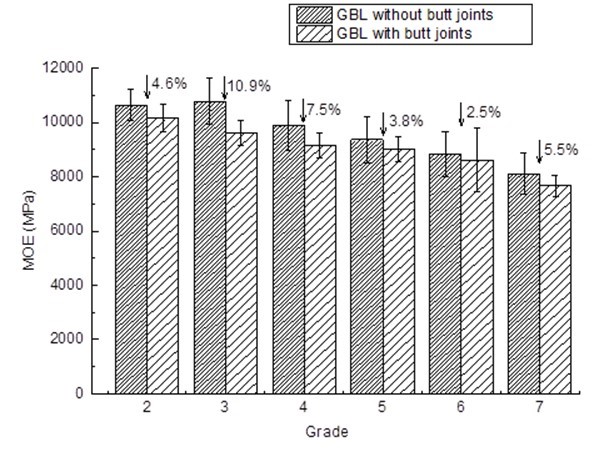 Fig. 11. Comparison of MOE between laminates with and without butt joints 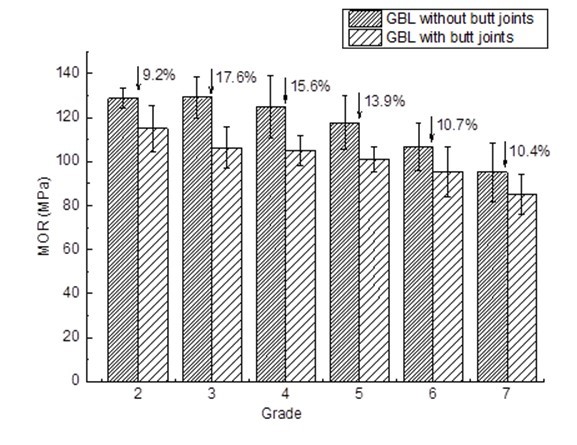 Fig. 12. Comparison of MOR between laminates with and without butt joints

The authors are grateful for the support of the 12th Five Years Key Technology R&D Program of China (2012BAD23B01) and the Special Fund of the International Center for Bamboo and Rattan (1632015001).