Recently, due to the widespread application of petroleum-based plastics, a series of environmental problems and a shortage of petroleum fuel have gradually developed (Hosoda et al. 2014). Therefore, eco-friendly biodegradable plastics have become the focus of attention. Polyhydroxyalkanoates (PHAs) are crystalline homopolymers produced by microbial fermentation and have good biodegradability and biocompatibility (Kynadi and Suchithra 2017). Poly (3-hydroxybutyrate-co-3-hydroxyhexanoate) (PHBH), a promising member of the PHA family, is a copolymer consisting of randomly arranged 3-hydroxybutyrate (3HB) and 3-hydroxyhexanoate (3HH) units (Zhou et al. 2015). They have numerous qualities that are superior to polyhydroxybutyrate (PHB), including low melting point and ductile properties. The amount of the 3HH fraction in PHBH strongly influences the properties of a polymer matrix, such as crystallinity, melting point, strength, and crystallization rate, all of which are considered as an optimal environmentally friendly packaging material. However, PHBH also has some disadvantages, such as a high price, low strength modulus, and poor thermal stability, which limit its extensive utilization (Xie et al. 2009).

In order to overcome the above weaknesses, great efforts have been made in research. Cellulose (obtained from cotton fiber, pulp, wood, etc.) has received much attention due to its strong mechanical properties and chemical reactivity. More importantly, cellulose is an inexpensive, biodegradable, and renewable resource, compared with synthetic polymers (Luo et al. 2017; Wang et al. 2018a). Meanwhile, the results show that cellulose obtained from natural fibers is widely utilized as a filler in biocomposites to improve their thermal stability, as well as their mechanical and barrier properties (Dong et al. 2010; Jie et al. 2016; Lin et al. 2016; Codou et al. 2017; Dasan et al. 2017). However, the dispersion of cellulose, due to poor compatibility between the relatively hydrophilic cellulose with the hydrophobic polymer matrix, results in inefficient compounding with most nonpolar thermoplastics (Hosoda et al. 2014). In some cases, the solution casting method could be an effective approach for overcoming this challenge (Malmir et al. 2017). Presently, there is little information available on the processing of PHBH/cellulose biocomposites.

Based on the above considerations, the objective of this study was to improve the compatibility between PHBH and natural cellulose via the solution casting method. A novel biocomposite was obtained. The effects of the mixing ratios between PHBH and cellulose on the micrographs, structures, and thermal and mechanical properties of the resulting copolymers were studied. The barrier properties of the biocomposites were also investigated experimentally and statistically.

The PHBH containing 11 mol% 3HH (Mw = 6 × 105) was a gift from Japan Kaneka Co (Osaka, Japan). Cellulose (the cotton linter pulp) with a degree of polymerization of 475, an intrinsic viscosity of 8.25 MPa·s, and a whiteness of 79% was purchased from Qingdao Liyuan Dade International Trade Co., Ltd. Trifluoroacetic acid, analytical grade, was purchased from Tianjin Fuqi Chemical Co., Ltd.

The following procedure has been typically used in the preparation of PHBH/cellulose biocomposite films. A total mass of 2 g of PHBH and cellulose were dispersed in trifluoroacetic acid solution, and the mixture was stirred at room temperature for 24 h and then allowed to stand 24 h to yield a clear solution. The solution was cast on a Teflon plate, and the obtained PHBH/cellulose biocomposite films were vacuum-dried at 60 °C for 48 h to remove residual acid solvents completely. The cellulose contents of the biocomposite films were 50 wt%, 60 wt%, 70 wt%, 80 wt%, and 90 wt%, named PC50, PC60, PC70, PC80, and PC90, respectively. Meanwhile, untreated PHBH and neat cellulose were used as controls.

A scanning electron microscope (SEM) (JSM-6360LV, JEOL, Tokyo, Japan) with an acceleration voltage of 5 kV was used to analyze the fracture surface of the composite films. All the nanocomposite sheets were frozen in liquid nitrogen and then immediately snapped. The fracture surfaces of the sheets were sputtered with gold and then observed and photographed.

Fourier transform infrared spectroscopy (FT-IR, Nicolet-6700, Thermo Scientific, Waltham, MA, USA) was adopted to measure the samples and obtain IR spectra. The samples were tested by preparation of 1:300 KBr discs, with a scanning time of 16 s, resolution of 4 cm-1, and scanning range of 400 cm-1 to 4000 cm-1.

X-ray diffraction (XRD) of composite films was performed to test the crystallinity on a power X-ray diffractometer (D/max-2500, Rigaku, Tokyo, Japan) using Cu K α radiation (wavelength was 0.154 nm, powdered samples). The XRD analysis conditions were as follows: scanning range of 5◦ to 60◦, scanning rate of 2◦ /min at 40 kV and 30 mA.

Mechanical properties of the samples were measured using an Instron Universal Testing Machine (Model 3369, Instron, Boston, MA, USA) according to ASTM D882-10 (2010). Smooth and uniform parts of cast film samples with the length of 175 mm, the width of 10mm, the thickness of 50 μm were selected. The machine was operated with an initial grip separation of 50 mm and a crosshead speed of 50 mm/min. Then, the tensile strength and elongation at break were measured. Five replicates were tested for each sample, and the average values are presented.

Thermogravimetric analysis (TGA) was conducted using a TG209 (Netzsch Instrument Co., Ltd., Germany) to determine the thermal stability of the samples. Approximately 5 mg of each sample was taken in a standard aluminum pan and heated from 0 °C to 450 °C at a heating rate of 10 °C/min in N2 atmosphere (20 mL·min-1).

The water vapor transmission (WTR) of the composite films was estimated gravimetrically following the standard method of GB/T 1037-1988 (1988). Oxygen permeability of the composite films was evaluated using a gas permeability tester (GDP-C, Brügger, Bremen, Germany) at room temperature. For each sample, three replicates were performed and the average values were reported.

Samples were cut into 1 cm × 3 cm and buried in the ground 15 cm deep. The samples were taken out every three days and then washed with distilled water, dried, and weighed. The mass loss rate of the samples was calculated as an indicator of degradation performance of the biocomposites. The degradation performance was recorded to calculate the mass loss rate according to the following equation,

where W, W0, and W1 are the mass loss rate (%), mass before film embedding (g), and mass after film removal (g), respectively.

The cross-sectional micrographs of the PHBH/cellulose biocomposites are shown in Fig. 1. The cross-section of PHBH was tidy with a porous structure (Fig. 1(a)). Compared with neat PHBH, the tiny holes disappeared, and a lamellar structure appeared in PHBH/cellulose biocomposites with increasing cellulose content (Fig. 1(b) to (f)). When the cellulose content was from 50 to 70%, there were voids and holes in the cross-section of the samples (Fig. 1(b) to (d)), which can be ascribed to the poor interfacial bonding and the phase separation between PHBH and cellulose. Figures 1(e) and (f) show the obvious lamellar structure. The PC90 was more compact, which may be due to the strong interaction between PHBH and cellulose molecules in the composites. Moreover, these composites showed some visible signs of fiber pull-out (Anderson et al. 2013), and the length of the pull-out fiber increased.

Fig. 2. XRD and FTIR curves of PHBH/cellulose composites: (a) XRD, (b) FTIR

When the cellulose content was increased from 50 wt% to 90 wt%, the position of the diffraction peaks of PHBH/cellulose composite films was close to that of the neat cellulose diffraction peak without the PHBH diffraction peak appearing. The intensity of each peak showed almost no obvious deviation, indicating that the addition of PHBH did not alter the crystalline form of the cellulose. Cellulose and composite materials showed a single broad band, which was related to the trifluoroacetic acid used for dissolving the component broke the H-bond network of cellulose, affected the regularity of polymer molecular arrangement, resulting in the destruction of crystalline region and the decrease of crystallinity. It may also be related to the addition of PHBH.

The elongation at break reached a maximum value of 28.5% at cellulose content of 50%, a 106% improvement compared with that of neat PHBH film and a 214% improvement compared with that of neat cellulose film. This can be ascribed to the decrease of cellulose crystallinity. With the increase of cellulose content, the elongation at break of the composite films decreased from 28.5% to 15.4%, which may be due to the interaction between cellulose and PHBH, forming intermolecular hydrogen bonds. It was also related to the rigidity of cellulose molecules.

Fig. 3. Mechanical properties of PHBH/cellulose composites: (a) tensile strength, (b) elongation at break 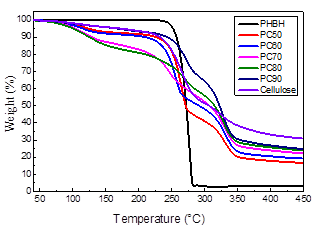 As shown in Fig. 5(a), with the increase of cellulose content, the oxygen transmittance coefficient of the composite films first decreased and then increased, which is attributable to the gradual appearance of lamellar structure in the composite films. Furthermore, the lamellar structure tended to be dense. Simultaneously, the total amount of hydrogen bonds gradually increased, making the binding between macromolecules more compact. The oxygen barrier of PC80 and PC90 was better than that of neat cellulose film, which was due to the good compatibility between PHBH and cellulose macromolecules and the formed hydrogen bonds between macromolecules. The oxygen barrier of PHBH film was the worst, which is attributable to the large number of pores on the surface of PHBH film and the loose structure of PHBH film.