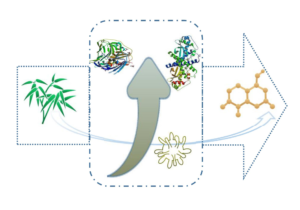 Lignins belong to a class of high-molecular organic compounds with natural reserves second only to cellulose, but it is difficult to degrade them. The molecular structure of lignin contains a large number of benzene ring structures, and it is a relatively complex aromatic polymer (Wang et al. 2010; Cheng and Brewer 2017). As a type of natural resource associated with cellulose and a large storage capacity, the degradation, recovery, and reuse of lignins have attracted a large amount of attention (Tian et al. 2015; Jose et al. 2017). At present, except for a portion of the recycled lignins that are directly used in construction, water treatment, and fertilizer, there is still a large amount of lignins that results in environmental pollution. Therefore, the effective degradation of lignins remains an urgent issue for the papermaking and pulping industry (Soloman et al. 2009).

Currently, there are multiple methods to degrade lignin, which include the hydrogenation reduction method, the catalytic oxidation method, the electrochemical method, the ultrasonic method, the microwave method, the microbial method, etc. Among them, the microbial method can completely mineralize lignins and therefore has received great attention from researchers (Yoshikata et al. 2014). As a kind of filamentous fungi, white rot fungi can cause white wood rot and degrade aromatic pollutants, primarily through the use of lignin peroxidase (Lip), manganese peroxidase (Mnp), and laccase (Lac) (Ryu et al. 2003). The enzymes Mnp and Lac play a major role in degradation and are directly involved in the degradation of dyes. Manganese peroxidase is an extracellular heme protein with a carbonyl group, which requires a H2O2 catalysis and the participation of Mn+. During the growth of mycelium, Mnp is secreted, and due to the catalysis of the enzyme, the benzene ring in the lignin structure undergoes a single electron oxidation reaction to form a phenoxy radical. Subsequently, a series of non-enzymatically catalyzed free radical reactions are followed by degradation, including the removal of the methoxy groups, the cleavage of the Cα-Cβ and alkylaryl ether bonds on the side chains, and the cleavage of the benzene rings (Hofrichter et al. 2001; Ghiaci et al. 2010). The degradation products of lignins are absorbed by the mycelium and further oxidized into CO2 and H2O. Laccase is a copper-containing oxidase, and copper plays a crucial role in degradation. As a polyphenol oxidase, it can deprotonate hydroxyl groups to form phenoloxy anions in the presence of molecular oxygen, leading to the breakage of the side chains of lignin-type structural units, including CC bonds, methoxy, and dihydroxyl, in which copper plays a decisive role (Ihssen et al. 2017). Lignin degradation via Lac does not involve H2O2 (Saparrat et al. 2008).

Phanerochaete chrysosporium strains are traditional model strains, which are typical Lip- and Mnp-producing strains, and generally they cannot secrete Lac (De Koker et al. 1998). A previous study by Ye et al. (2010) has shown that the selective production of Mnp could be controlled through controlling the level of Mn2+ ions in the culture. Thus, Mnp can be selectively obtained via the fermentation of Phanerochaete chrysosporium strains. Pleurotus ostreatus strains have become a model strain for degrading pollutants, due to its superior degradation performance. Pleurotus ostreatus can secrete both Lac and Mnp, but it has a particularly high Lac yield (Pezzella et al. 2008). Therefore, in this study, Lac was obtained via the fermentation and culture of Pleurotus ostreatus.

Various studies have reported the degradation of lignins via enzymes from white rot fungi, but little is known about the mechanism. The authors constructed different degradation systems, and GC-MS was performed on the reaction liquid of the lignin degradation enzyme systems to explore the underlying mechanism.

The bamboo powder passing through the 200-mesh screen was mixed with a 15% NaOH solution at a dry mass ratio of 1 to 1 and cooked at 140 °C for 2 h. After this, the black liquor was transferred to a RE–2000A rotary evaporator (Shanghai Jiapeng Technology Co., Ltd, Shanghai, China) and dried under a vacuum at 90 °C to obtain crude lignins, which were dissolved in 140 mL of pyridine, acetic acid, and water (in a ratio of 9 to 1 to 4). The solution was extracted with chloroform (160 mL) and deionized water (20 mL), which caused it to separate into layers. After that, the lignins were precipitated in ether after the lower organic layer was extracted 3 times to concentrate it, and then dried in a vacuum.

The purified lignins were dissolved in a 0.1 mol/L NaOH solution to obtain a 1 g/L original alkali lignin solution. An acetic acid-sodium acetate buffer (with a pH of 5.0) was added to both the original and the degradation reaction lignin solutions. Then, the solution was scanned at wavelengths ranging from 200 to 800 nm using a Lambda 900 UV-1100 spectrophotometer (Perkin Elmer, Waltham, MA). The alkali lignin solution was mixed with the acetic acid-sodium acetate buffer (with a pH of 5.0) to obtain the 10, 20, 40, 60, 80, and 100 mg/L solutions. Then, the standard curve was made by measuring the absorbance value at the characteristic absorption peak in the ultraviolet spectrophotometer.

The purified alkali lignins (1 mg) and KBr were mixed and ground to form the samples. A Fourier infrared spectrometer (VERTEX70, Bruker, Billerica, MA) with a resolution of 4 cm-1), in the range of 4000 cm-1 to 400 cm-1, was used to analyze the structure of the lignins (10 scans were performed).

Construction of the Degradation Systems with Different Lignin Concentrations

After 10 d of fermentation, the broths of two white rot strains were centrifuged at 4000 rpm for 20 min. The supernatant was used to prepare the degradation system (with a pH of 5.0) of the Mnp and Lac enzymes, with an alkali lignin concentration of 10, 20, 40, 60, 80, and 100 mg/L, respectively. The enzyme activity was 2.4 U/mL and the amount of Mn2+ was 0.04 mmol/L. Then, 0.04 mmol/L of H2O2 was added to the system to initiate the reaction for 24 h at 40 °C with 3 replicates for each group. A protein inactivation degradation system under the same conditions was included as the control group.

Construction of the Degradation Systems with Different Enzyme Activities

The GC-MS analysis was performed as previously described by Jordaan and Laurens (2015). Samples from the degradation system were collected after running the reaction for 24 h, and the samples were analyzed via GC-MS. The degradation liquid (15 mL) was centrifuged at 10000 rpm for 10 min, and the supernatant was removed via n-hexane extraction (25 mL), which was performed three times. The organic phase was combined, Na2SO4 was added, and the sample was dehydrated, followed by placing it into the rotary evaporator. Then, 0.5 mL of N,O-bis (trimethy-l-silyl) trifluoroacetamide (Sigma-Aldrich, St. Louis, MO) was silanized at 50 °C for 30 min after vacuum concentration to 1 mL at 70 °C. The excess silanizing reagent was expelled with nitrogen as the test sample.

To investigate the alkali lignin concentrations, ultraviolet spectral analysis was performed to measure the optical density (OD), and a standard curve was drawn. The results showed that the alkali lignins had a characteristic absorption spectrum with a peak at approximately 280 nm (Fig. 1A), suggesting that the removal of alkali lignins could be calculated by measuring the change in the absorbance value at a wavelength of 280 nm after the sample is collected from degradation system. The standard curve was drawn at 280 nm, and the OD trace value was linearly related to the alkali lignin concentration (the correlation coefficient was 0.9991 (Fig. 1B)). The linear regression equation is y = 0.015x + 0.0135 (Baldrian and Šnajdr 2006).

Fig. 2. The structure of an alkali lignin detected via FTIR spectroscopy

Fig. 3. Effect of the substrate concentration on the degradation of alkali lignins via Mnp and Lac

The Mnp and Lac degradation reaction liquid was prepared for ultraviolet spectral analysis. The results showed that the same trend was observed in the separate Mnp and Lac lignin degradation systems. The absorption peak of alkali lignins at 280 nm did not shift, and the ultraviolet absorption in the wavelength range 200 nm to 300 nm did not increase. However, there was a slight change in the wavelength range of 250 nm to 280 nm in the two degradation systems, which indicated that precipitation played a major role in the removal of alkali lignins from the solution phase (as shown in Fig. 4A). The GC-MS analysis results showed that degradation also contributed to the removal of alkali lignins. The degradation primarily produced organic acids, esters, and aromatic substances (as shown in Fig. 4B, Fig. 4C, Table 3, and Table 4).

In this study, different degradation systems were constructed, and spectral analysis and GC-MS were performed in the reaction liquid from these lignin degradation enzyme systems. The authors found that white rot fungi removed lignin primarily via precipitation, while enzymolysis was a secondary effect.

The precipitation of alkali-lignins in the constructed degradation systems may be due to the fact that purified alkali-lignins are a type of macromolecule organic compound with a three-dimensional network structure and poor solubility, which can be used as an anion flocculant for proteins in fermentation broth (Qiao et al. 2006). In addition, fermentation broths containing Phanerochaete chrysosporium and Pleurotus ostreatus strains were used to construct both lignin-degrading enzyme degradation systems, which may contain flocculating proteins and polysaccharide.

In summary, white rot fungi could effectively remove alkali lignin, in which precipitation played a major role, followed by enzymolysis. The products of enzymolysis were mainly organic acids, esters, and aromatic substances. However, whether the purified alkali lignins had a partial benzene ring structure fracture or mineralization in the Mnp and Lac degradation systems requires further study. This study provided new ideas for effective lignin degradation, which may be helpful to solve the problem of recycling paper and pulp industry effluents in the future.

This research was supported by a grant from the China Postdoctoral Science Foundation (2020M673112), the Wenzhou Science and Technology Bureau (Grant No. S2020005, W20170010), the National Natural Science Foundation of China (Grant No. 51808086), the Special project of basic research and frontier exploration in Chongqing (Grant No. cstc2018jcyjAX0078) and Provincial and Ministerial Co-constructive of Collaborative Innovation Center for Municipal Solid Waste Comprehensive Utilization (Grant No. shljzyh2021-23).