To realize resource technology from fruit and vegetable waste, a Plackett-Burman (P-B) experiment combined with an orthogonal experimental design were adopted for the optimization of ethanol fermentation from this waste. By using the 12-factor P-B design, it was determined that the significant factors were KH2PO4, cellulase, and yeast extract. The orthogonal experimental design with the ethanol fermentation and reducing sugar as indices showed that the optimum conditions were KH2PO4, cellulase, and yeast extract concentrations of 0.3 g/L, 90 U/mL, and 10 g/L, respectively. Ethanol fermentation from fruit and vegetable waste has provided a feasible application for this waste.

To realize resource technology from fruit and vegetable waste, a Plackett-Burman (P-B) experiment combined with an orthogonal experimental design were adopted for the optimization of ethanol fermentation from this waste. By using the 12-factor P-B design, it was determined that the significant factors were KH2PO4, cellulase, and yeast extract. The orthogonal experimental design with the ethanol fermentation and reducing sugar as indices showed that the optimum conditions were KH2PO4, cellulase, and yeast extract concentrations of 0.3 g/L, 90 U/mL, and 10 g/L, respectively. Ethanol fermentation from fruit and vegetable waste has provided a feasible application for this waste.

As dietary structures change amongst people, the ratio of fruit and vegetable waste in city garbage has had a notable upward trend. According to statistics, fruit and vegetable waste generated in China is as high as 1.3 million ton/d, of which 80% is not used and is discarded as rubbish or in the environment (Liu et al. 2012a; Shen et al. 2013). Because of the high moisture content and biodegradability, conventional landfill treatment not only releases greenhouse gases, but it also produces a large amount of leachate, which has a serious negative impact on the urban environment (El-Fadel et al. 2002; Cheng and Hu 2010). As a consequence, there is an urgent need to develop an advanced applicable fruit and vegetable waste disposal technology.

In much of the available renewable energy research, biological fuel ethanol has received a large amount of attention because of its advantages. Because ethanol has a high-octane number, good anti-detonating quality, and CO2 and H2O combustion products, and because it can use the characteristics of biomass resources for production, it is considered to be the best environmentally friendly liquid fuel for the future. Therefore, it has clean energy applications (Jensen and Govindan 2014; Asimakopoulos et al. 2018; Briand et al. 2018; Saravanan et al. 2018). Bioethanol accounts for 75% of the biofuel market. China, Brazil and the United States are already using a mixture of bioethanol and gasoline (Panda et al. 2018). The energy supply diversification strategy has become a direction for the energy policy of China, in which ethanol is representative of alternative energy sources. Fuel ethanol has broad prospects for development.

First, 0.1 g of yeast was added to 100 g of crushed fruit and vegetable waste as an inoculum. The amount of enzyme preparation was set according to the experimental table, and fermentation was performed after adding an appropriate amount of nutrient salt. It was placed in an Erlenmeyer flask for sealed anaerobic fermentation, and the entire process was carried out in a shaker with the speed of 145 r/min. The experimental temperature and pH were set to 37 °C and 6, separately. The experimental period was from 48 h to 60 h.

The P-B design method is a two-level experimental design method developed in the mid to late 20th century. Based on the principle of a non-completely balanced block, it can test multiple independent adjustable variables in one experiment and select the factors that have significant influence on the experimental results through statistical analysis. The method is effective and accurate at selecting important factors and therefore, it is widely used in the screening of microbial culture media.

Table 1 shows the 11 factors for the 12 experiment groups that were designed. The enzymes included pectinase, saccharifying enzyme, cellulase, amylase, and protease. The nitrogen source was yeast extract, and the inorganic salts were MgSO4, KH2PO4, CaCl2, (NH4)2SO4, and a blank.

Table 2. Factor and Level of the Orthogonal Design Experiment

A certain volume of fermented broth was taken, centrifuged at 10000 rpm for 15 min, and the supernatant was used to determine the reducing sugar and ethanol contents. The DNS method was used for the reducing sugar content, and the ethanol content was determined by SBA-40c (Academy of Sciences Institute of Shandong Province, China). The analysis of the P-B experiment was performed with Statistica 6.0 (StatSoft, USA), and the orthogonal experiment was performed with SPSS-19.0 (IBM, USA).

According to the design in Table 1, the nutrient elements were added to the basic medium. The ethanol fermentation was done according to the method given in the Experimental section, and the content of ethanol produced is shown in Table 3. Table 4 shows the experimental analysis and the p value was used to determine the factors with a significant influence at a 95% confidence interval (p < 0.05). The p(a) values in Table 4 showed that KH2PO4 corresponded to the smallest p value of 0.051. Among the variables examined, the cellulase, yeast extract, and KH2PO4 were significant factors (p < 0.1). The order of significance was as follows: KH2PO4 > cellulase > yeast extract. Phosphate had a significant effect on increasing the ethanol production. This was consistent with the results of Janke et al. (2017), who showed that adding phosphate resulted in faster degradation kinetics and higher production when fermenting sugarcane straw.

Vintilă et al. (2015) showed that the addition of phosphorus (KH2PO4) increased ethanol production in sweet sorghum juice fermentation. Therefore, during ethanol fermentation from fruit and vegetable waste, phosphorus as a nutrient element may accelerate the degradation kinetics and promote the production of ethanol.

The effect of cellulase on the experiment was significant. Because of the rich cellulose content in vegetables and peels, the addition of cellulase could increase the utilization of raw materials during ethanol fermentation. The addition of yeast extract not only provided a nitrogen source, but also contained some minerals. Yeast extract could meet the needs of microbial metabolism and increase their activity. Therefore, it had a significant impact on ethanol fermentation.

Nawaz et al. (2018) also confirmed that a medium containing yeast extract had the highest enzyme activity compared with other inorganic nitrogen sources. Also, the yeast extract quality was stable and cost-effective, which is the basic choice for general industrial fermentation.

The type of nutrient elements was determined from the results of the P-B experiment. To optimize the composition of the medium, the content of the respective nutrient elements should also be confirmed. Therefore, a corresponding experimental analysis should be performed. 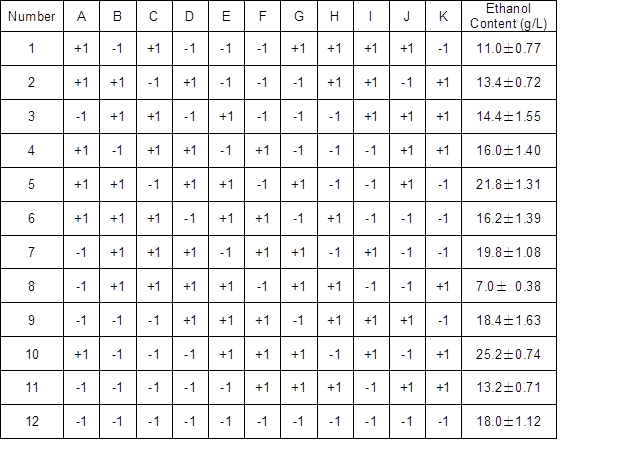 Table 4. Analysis of the P-B Design for Ethanol Fermentation 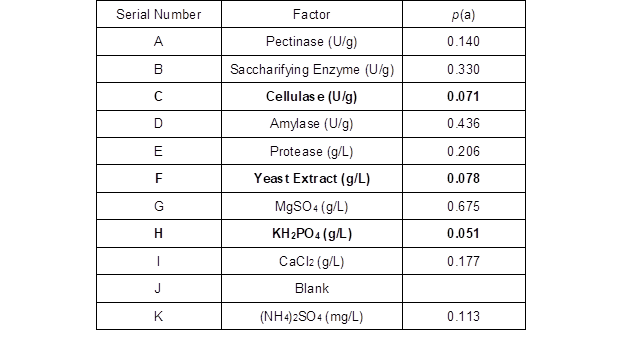 Analysis of the Orthogonal Experiment Results 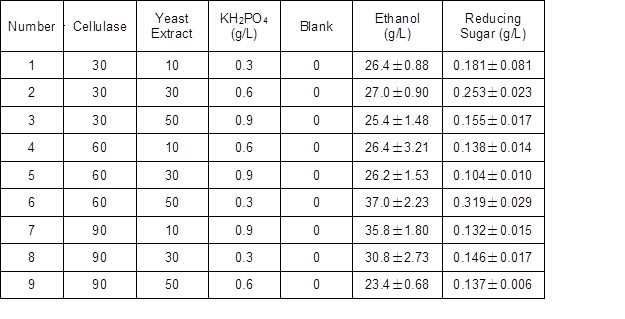 It was assumed that the factor with a p value less than 0.05 was significant. However, Table 6 shows that the three factors selected were not significant factors for ethanol and reducing sugar production. Mathematically, these factors were not important, but they were still of crucial importance for ethanol fermentation. Inei-Shizukawa et al. (2009) found that the optimum zeolite concentration during ethanol fermentation was 0.2 g/L. Because of the similar concentration, the zeolite addition was not as important as the other factors that had significant effects. However, the optimization of this culture condition resulted in a 20% increase in the ethanol production, which indicated the importance of zeolite in ethanol optimization research. In this study, the significance of the three factors was as follows: KH2PO4 > cellulase > yeast extract. According to the optimum conditions, it was determined that for ethanol production, the optimum conditions were 90 U/mL cellulase, 30 g/L yeast extract, and 0.3 g/L KH2PO4 (shown in S1, differential map). To fully consider the experimental process, the effect on the reducing sugar concentration was also determined. Table 6 shows that the corresponding factors were also insignificant factors, but the order of influence of each was as follows: KH2PO4 > cellulase > yeast extract. As is shown in S2, the optimum conditions determined were 90 U/mL cellulase, 10 g/L yeast extract, and 0.3 g/L KH2PO4. Under these experimental conditions, the reducing sugar concentration was the lowest.

Considering the levels of the two indicators, it was observed that the optimum levels for the cellulase and KH2PO4 were consistent. For different yeast extract contents, the best condition was 10 g/L from an economic point of view. Therefore, the final optimum conditions were as follows: 90 U/mL cellulase, 10 g/L yeast extract, and 0.3 g/L KH2PO4.

The average TS in this experiment was determined to be 12%, and the highest ethanol concentration is 37 g/L. Since 100 g fermentation broth was used in this study, and the density is about the same with water, with the calculation we could get the ethanol yield 0.308 g ethanol /g TS.

Plackett-Burman design and orthogonal experiment principles were applied in this study to optimize the ethanol fermentation from fruit and vegetable waste. The influential parameters among 11 factors were determined to be cellulase, yeast extract and KH2PO4.
The corresponding optimum conditions optimized by orthogonal experimental design based on ethanol concentration and reducing sugar showed that a maximum ethanol concentration of 37 g/L could be achieved with the conditions of cellulase 90 U/g, yeast extract 10 g/L, and KH2PO4 0.3 g/L. The corresponding optimum ethanol concentration was 0.308 g ethanol/g TS.
Such technology can utilize fruit and vegetable waste and achieve ethanol as a product, thus attaining the dual goals of environmental protection and resource recovery.

This work was supported by the International Science and Technology Cooperation Program of China (2013DFG92600, 2016YFE0127800), the National Scientific Funding of China (51378003, 51778052), and the Fundamental Research Funds for the Central Universities (FRF-BD-17-014A). Also the support from Sino-US-Japan Joint Laboratory on Organic Solid Waste Resource and Energy Technology of USTB is appreciated.