The major component of a Korean-style house (Han-ok) is round wood (boxed heart) with a diameter of over 20 cm. However, surface checks unavoidably occur during the conventional drying of these materials due to anisotropic shrinkage. The high-valued wood-crafted products manufactured using round wood have been slowly dried to prevent surface checks after being soaked for a long time in a solution of polyethylene glycol (PEG). This method is called the PEG drying method. Surface checks are prevented by the PEG drying method because shrinkage is inhibited by PEG penetration of the wood cell walls (Stamm 1959; Mackay 1972; Alma et al. 1996; Hoadley 2000; Jena and Gupta 2002). The hydroxyl groups of cellulose in the wood cell walls bond easily with the oxygen of ether groups in PEG as a water-bone nonionic surface active agent, resulting in the loss of water molecules (Ralph 2006). It is important to improve the penetration rate of PEG in order to prevent surface checks. There should be free water present in wood specimens, which initiates the mutual interchange between the free water and the solution of PEG. This results in the penetration of PEG because of its water solubility (Loughborough 1948). The penetration rate is affected by the specific gravity of wood (Ralph and Edwards 2004; Hong et al. 2013), and it increases with increasing temperature (Yamaguchi et al. 1999). Wood cell walls are penetrated faster with low molecular weight PEG than with high molecular weight PEG (Jeremic and Cooper 2009). Wallstrom and Lindberg (1995) reported that the weight of specimens was increased by 20%; however, only a slight amount of the low molecular weight PEG penetrated the specimens. Mueller and Steiner (2010) showed that PEG treatment reduces variation in wood color, especially, low molecular weight PEG. Hoadley (2000) found that the molecular weight of 1000 was most suitable for preventing surface checks in wood.

In this study the capillary flow porometer (CFP) (Fig. 1) developed by Porous Material Incorporated (Ithaca, USA) was used for obtaining the air permeability of wood. This method measures gas flow rates as the function of pressure difference as described in ASTM 316-03 (2011). The special design of the instrument permits measurement of very small flow rates through some of the dense electrodes. It is possible to test samples having a variety of shapes and sizes. 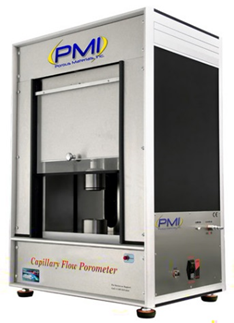 Five logs of each red pine (Pinus densiflora) and Korean pine (Pinus koraiensis) of 20 to 25 cm in diameter and 80 cm in length were prepared. Among 5 logs, one was selected for control and others for PEG-treatment. There were 45 to 48 and 25 to 30 annual rings on the red and Korean pines, respectively. All logs were debarked to increase their penetrating ability. Two 15-cm long wood disks were cut from the both ends of each log and allocated to the initial moisture content (MC) and gas permeability specimens. The logs of 50-cm length were end-coated with polyvinyl acetate chloride (PVAc). To estimate the initial MCs of the logs two 3x3x3cm3 MC specimens were taken each of the 15-cm long wood disk. They were weighed with a digital balance of 0.01g accuracy, followed by oven-drying at 103±2℃. Reaching to constant weights, they were weighed again. Their MCs were calculated using Eq. 1,

Room temperature solid PEG-1000 was first melted at 60 °C. Liquid PEG was diluted in water at a 2:1 ratio. The logs had been fully immerged in the solution by top-loading dummy boards for three weeks. After impregnation, the logs were dried under at 120 °C for 49 h, including the one-hour time for attaining the desired temperature, in a kiln drier. The air velocity through the specimen piles was about 3 m/s.

During drying. one PEG-treated and one control log for each species were weighed regularly. After drying, a 5-cm thick wood disk was taken in the middle of each log and weighed. They were then oven-dried at 103±2 °C to calculate the final MC of the logs using Eq. 1. 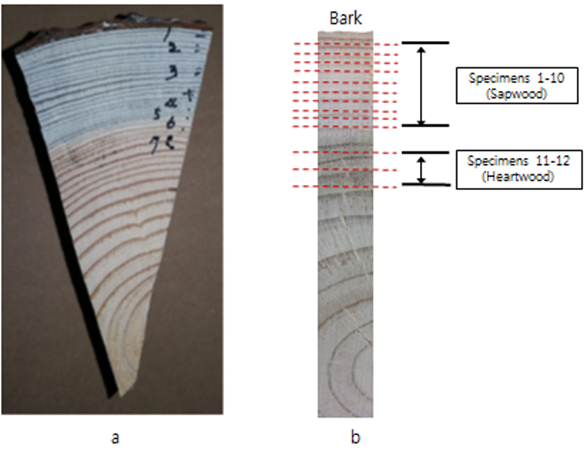 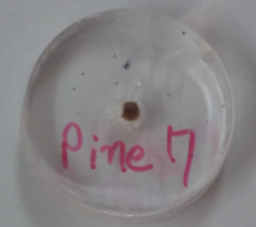 Gas flow rate was obtained by using the CFP. Before the CFP test, the specimens were saturated with distilled water after evacuating the chamber containing them. Water-saturated specimens were placed in the CFP chamber, which was tightly closed (Fig. 4). Nitrogen gas flowed in behind the specimen. The gas pressure and flow rate through the dry specimen were also measured. From these results, air permeability of wood specimens was estimated. The maximum air pressure adopted by CFP was about 0.7 MPa. 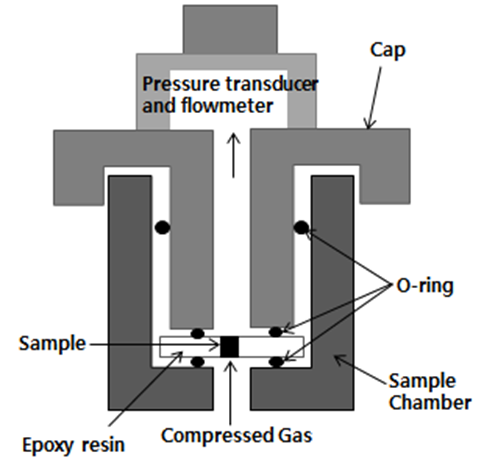 Permeability measures the ability of fluids to flow through porous media. It is normally described as a unit of a Darcy. The Darcy is referenced to a mixture of unit systems. A medium with a permeability of 1 Darcy permits a flow of 1 cm³/s of a fluid with viscosity 1 cP (1 mPa·s) under a pressure gradient of 1 atm/cm acting across an area of 1 cm². The Darcy is not an SI unit. Converted to SI units, 1 Darcy is equivalent to 9.869233×10−13 m3/m (Wikipedia 2017). Gas permeability is calculated from the dimension of the specimen and the gas flow rate using Eq. 2,

where, k is the gas permeability (m3/m), Q is the volumetric gas flow rate (cm3/s), L is the longitudinal length of the specimen (cm), η is the viscosity of the gas (mPa·s), A is the cross-sectional area of the specimen (cm2), and ΔP is the pressure difference (1atm/cm).

The longitudinal length of the specimens was the same as the thickness of beds, which was 10 cm long. The cross-sectional area was calculated from the photos of both ends of the specimen taken with a stereoscopic microscope (Dinolite AM-311S, Anmo Electronics Co., Taiwan Hsinchu) and a graphic software.

The MC of red and Korean pine logs as a function of drying time is presented in Fig. 7. The initial MCs of the treated and control samples of red and Korean pine specimens were approximately 38%, 32%, 62%, and 57%, respectively. Regardless of species, the MC of PEG treated logs was slightly higher than that of the control sample. It is natural that the PEG-treated logs absorbed water during impregnation. But it is interesting to notice that both control and PEG-treated logs reached the same final MC of about 15%. It implies that most of the PEG solution was exuded during drying. Whether PEG treated or not, Korean pine dries faster than red pine, which can be explained by the difference of gas permeability between species as described before. 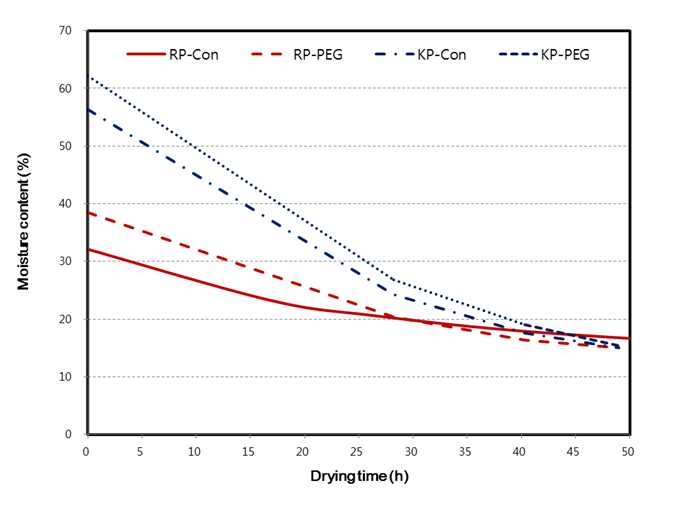 Fig. 7. The MCs of red and Korean pines as a function of drying time

At the drying time of 20 h from the beginning of drying, several narrow and short surface checks were found on PEG-treated red pine logs, while large and long cracks were found on the controls. However, no surface checks were discovered on both PEG-treated and control Korean pine log. These observations can be accounted for by the effect of PEG on retraining shrinkage of sapwood, effect of high drying temperature on increasing tensile stresses on surface layer during the initial stage of drying, and much higher permeability of sapwood in Korean pine absorbing more solution of PEG etc. Therefore, PEG played an important part in retraining the surface checks. This was in agreement with the observations of other researchers (Stamm 1959; Mackay 1972; Alma et al. 1996; Hoadley 2000).

After drying, serious surface cracks were present on a control red pine log, while visible checks were not found on a PEG-treated red pine log (Fig. 8). No checks were discovered on Korean pine logs after drying, which can be ascribed to the PEG effect. This indicates that PEG treatment is effective in preventing surface checks. 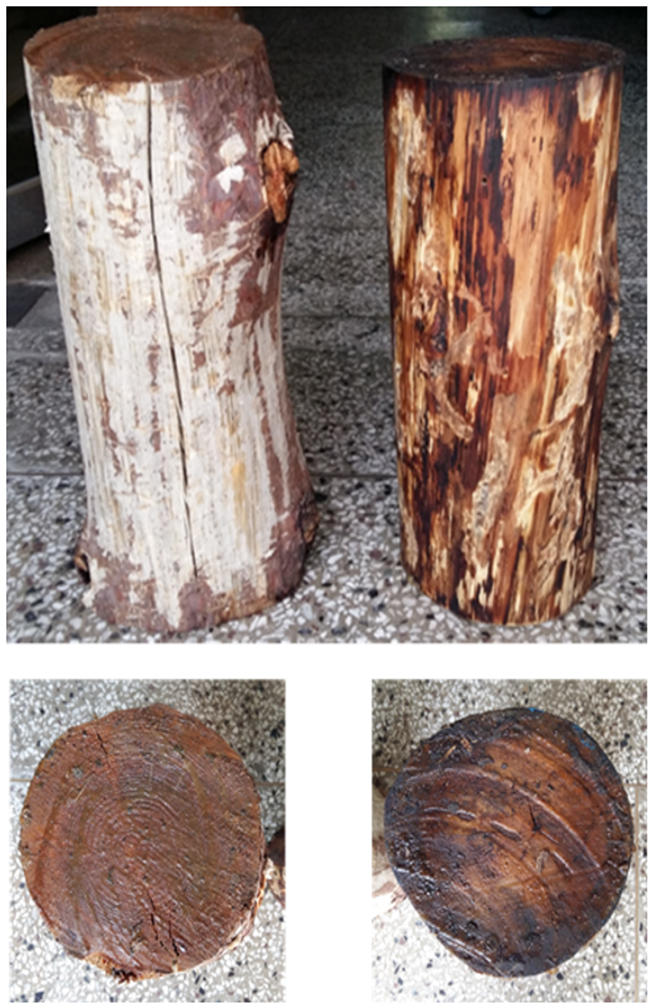 Internal cracks inside the red pine logs, observed after logs were cut at the middle position, and then at the end surfaces of logs were exposed to air for one week after drying had finished in order to fully release the viscoelastic strain, are shown in Fig. 9. Internal cracks developed inside both control and PEG-treated red pine logs. However internal checks in the PEG-treated logs did not extend to the sapwood compared with the control logs. This can be attributed to the PEG effect, which makes the shell layers of treated specimens stable dimensionally. This also proved the effect of PEG restraining shrinkage of sapwood. 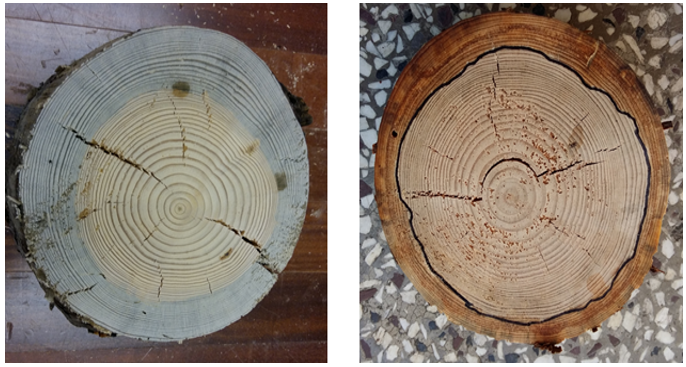 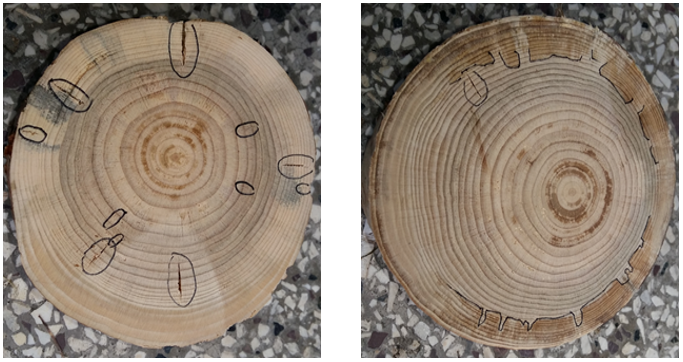 This study was carried out with the support of ‘Forest Science & Technology Projects (Project No. S121414L060120)’ provided by Korea Forest Service.

Jena, A., and Gupta, K. (2002). “Characterization of pore structure of filtration