Aerogels, an important kind of porous material, have been defined as solids having nano-scale pores formed by replacement of liquid in a hydrogel or alcogel with gas (Sehaqui et al. 2011). Aerogels typically display high porosities of up to 99%, and high surface areas usually between 100 and 1000 m2 g-1 (Mukhopadhyay and Rao 2008). As ultra-light materials, aerogels have been used in a wide range of applications (Tsioptsias et al. 2008; Aaltonen and Jauhiainen 2009). To date, in response to the growing need for sustainable and environmental development, the utilization of naturally occurring polymers is becoming increasingly attractive and important. Natural polymers, e.g. chitosan (Ricci et al. 2010), alginate (Escudero et al. 2009), and cellulose (Wang et al. 2012), are promising materials for preparing aerogels due to their excellent biodegradability, hydrophilicity, biocompatibility, low toxicity, and ready availability from renewable resources. In the past a few decades, aerogels from natural polysaccharides have been intensively studied and applied in food, wastewater treatment, sensing, wound dressing, and the pharmaceutical industry (Valentin et al. 2006; Chang et al. 2008; Surapolchai and Schiraldi 2010) .

Cellulose, the most abundant natural polysaccharide in the world (Moon et al. 2011), possess unique properties such as nontoxicity, recyclability, and low cost (Guo et al. 2012). As a promising green, inexpensive, and sustainable material to replace the petrochemical derived materials, cellulose is attracting increasing attention. However, cellulose is difficult to process in most solvents because of its insolubility, which results from the strong intra- and inter-molecular hydrogen bonding. Luckily, an innovative class of green solvents-ionic liquids with excellent dissolving capability, recyclability, and negligible vapor pressure have been developed as the alternative and effective solvent for cellulose processing (Hao et al. 2009; Pinkert et al. 2009). For example, ionic liquids with imidazolium structure, 1-butyl-3-methylimidazolium chloride (BmimCl) (Liebert and Heinze 2008) have been used to dissolve and process cellulose into hydrogels and the corresponding aerogels. Tsioptsias et al. (2008) used 1-allyl-3-methylimidazolium chloride for the cellulose dissolution. Cellulose aerogels were obtained with a BET surface area of 315 m2 g-1. They also used rapid decompression of the supercritical CO2 to foam the materials. Aaltonen and Jauhiainen (2009) used 1-butyl-3-methylimidazolium chloride for cellulose dissolution, and regenerated it in aqueous ethanol baths. They obtained a cellulose aerogel with a BET surface area of 539 m2 g-1 by CO2supercritical drying. However, most of the aerogels suffer from a lack of mechanical performance, which has limited their further applications. Therefore, an easier and low-cost way to prepare high performance cellulose aerogels is still desired. Moreover, the properties of the cellulose aerogels reported by different groups show great difference, and the effect of raw materials on the properties of cellulose aerogels is unclear.

Microcrystalline cellulose (MCC) with a polymerization degree of 280 was supplied by Sinopharm Chemical Reagent Co., Ltd. Dissolving pulp cellulose (DMCC) with a polymerization degree of 884 was supplied by Shandong Bohi Industry Co., Ltd. A whole piece of pulp board was cut into shreds, fed into the shredder, and ball-milled into powder before use. 1-Butyl-3-methylimidazolium chloride (BmimCl) was from Shanghai Chengjie Chemical Co., Ltd. The dye, rhodamine 6G, was from Aladdin Chemistry Co., Ltd of China, and it was used as received without further purification.

Preparation of Cellulose Alcogels and Aerogels

20 g of ionic liquid was dissolved in a 50 mL three-necked round-bottomed flask in an oil bath at 110 °C under the protection of nitrogen. Then, the desired amount (0.6, 0.8, 1.0 or 1.2 g) of MCC (or DMCC) was slowly added to the solvent and stirred with magnetic stirring for 4 to 6 h at 110 °C to obtain a transparent cellulose solution (3 to 6 wt%). The solution was decanted into lubricated watch glasses (50 mm diameter, 30 mm height) to give a 10-mm-thick layer, and degassed by ultrasound (100 W, 60 °C). The resulting solution was immersed into an ethanol coagulation (regeneration) bath at ambient temperature, until detected by 0.1 mol/L AgNO3 solution without sediment. The regenerated cellulose alcogel was washed with several changes of ultrapure water to remove residual ethanol, which fulfilled the solvent exchange.

The obtained cellulose alcogel was precooled in refrigerator at 0 °C for 12 h. After that, it was freeze-dried to obtain the cellulose aerogel.

The X-ray diffraction (XRD) of cellulose aerogel and cellulose was determined by a D/max-IIIA X-ray diffractometer (Bruker Corporation, Germany), in which the high-intensity monochromatic nickel-filtered Cu Kα radiation (λ = 0.15418 nm) was generated at 40 kV and 40 mA. Samples were scanned at a speed of 1°/min, ranging from 2θ = 5 to 50° with step size of 0.02° at room temperature.

The compression strength of the aerogels was measured on an Instron Universal Testing Machine 5565 (Norwood Corporation, USA) with a load cell of 2000 N. Before testing, the aerogels were tailored to the same size of 10 mm in length, and the strain rate of 10 mm/min was applied.

Briefly, 0.1 g MCC aerogel or DMCC aerogel was added into 10 mL rhodamine 6G solution at an initial concentration of 10 mg/L and placed into a 25 mL conical flask at a constant temperature of 25 °C. Then the solution was carefully withdrawn from the conical flask to be conducted absorbance detection by the ultraviolet spectrophotometer at determined time intervals.

0.1 g MCC aerogel or DMCC aerogel was added into 10 mL 10 mg/L rhodamine solution and shaken in the constant temperature water-bath oscillator for 24 h, respectively. The absorbance of the residual solution was measured by a UV/VIS spectrophotometer (TUH810 SPC, from Beijing Pgeneral Co., Ltd) at a maximum wavelength of 528 nm. The final concentration of the solution was calculated according to a calibration curve. The dye adsorption capacity at equilibrium, qe (mg/g), can be calculated from Eq. 1,

The adsorption of cellulose aerogel on cyclohexane, toluene, gasoline, liquid paraffin, vegetable oil, and carbon tetrachloride was evaluated in this experiment. Similarly, 0.1 g DMCC aerogel was added into the organic solvent, and all the other procedures were unchanged, as mentioned above.

Figure 3 shows the SEM images of cellulose aerogels. The aerogels obtained by MCC and DMCC showed differences in morphology between the surface and cross sections. The images of MCC aerogels in Fig. 3A and B show a dense surface, whereas DMCC aerogels display a macroporous structure. It can be observed that the inner parts of all the aerogel samples viewed on the cross sections displayed more uniform, nanometer-sized pore structures composed of fibrillar networks (Figure 3E, F, G, and H).

Powder X-ray diffraction was used to probe the crystallinity of the cellulose raw materials and the corresponding cellulose aerogels (Fig. 4).

The mechanical properties of cellulose aerogels were explored. The curves of stress-strain from uniaxial compression of different concentration of MCC and DMCC aerogels are exhibited in the Fig. 5. It can be seen that both curves of MCC and DMCC aerogels presented a linear slope at the initial stage, which was indicative of the elastic behavior of the aerogel samples for small strain values. At the high strain region, the compress stress increased with the strain. The maximum Young’s modulus appeared in the 5% MCC aerogel and 4% DMCC aerogel, and Young’s modulus of 5% MCC aerogel was lower than that of 4% DMCC aerogel. This means that the network structure is more complex and compact in DMCC aerogels. Although the concentration was lower than that of MCC aerogel, the extra cellulose cannot support the strength in the porous structure of aerogels, which stated that the polymerization degree plays a more important role in the mechanical strength of aerogels. 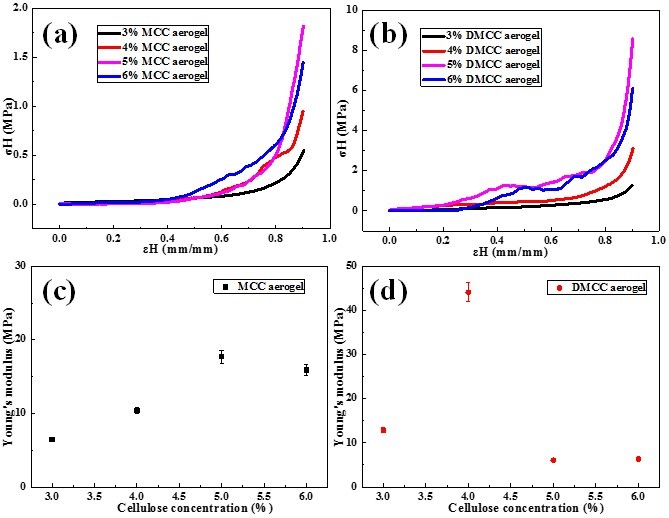 Fig. 5. Compressive stress–strain curves of MCC (a) and DMCC (b), (c, d) Young’s modulus of MCC and DMCC with different contents of cellulose 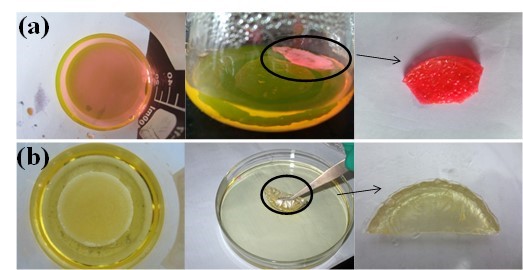 Fig. 6. Images of adsorption of rhodamine 6G (a) and organic solvent (b) on cellulose aerogels

The Langmuir isotherm is based upon the hypothesis of three conditions that adsorption takes place at monomolecular layer, the solid surface is uniform, and there is no interaction among adsorbates. The linearized Langmuir isotherm equation is as follows (Langmuir 1918; Eq. 2),

where qe (mg/g) is the adsorption capacity, Ce (mg/L) is the equilibrium concentration of solute, qo (mg/g) is the maximum capacity of adsorbate to form a complete monolayer on the surface, and b (L/mg) is the Langmuir constant related to the heat of adsorption. Using Ce/qe as the x-axis and Ce as the y-axis, the data can be linearly fitted (Fig. 7b), through which qo and b can be calculated from the slope and the intercept respectively.

The main characteristics of the Langmuir isotherm can be described by RL, a dimensionless constant, which determines the isotherm of the adsorption process by Eq. 3 (Sakkayawong et al. 2005),

where b is the Langmuir constant, Co is the initial concentration of rhodamine 6G (mg/L), and RL values indicate the type of adsorption isotherm, which can be either unfavorable (RL>1), linear (RL=1), favorable (0<RL<1), or irreversible (RL=0). All values of RL calculated in the experiment were in the range of 0.9901 to 0.9990 according to the equation (5), illustrating that the adsorption process is favorable for DMCC aerogels.

Using adsorption time as the x-axis and adsorption capacity as the y-axis, the influence of adsorption time on adsorption capacity of MCC and DMCC aerogels are shown in Fig. 9(a). The adsorption of rhodamine 6G on aerogels contains three stages: the first one is that rhodamine 6G diffused to the surface of aerogels and is adsorbed by the molecules on the surface. The second one is that rhodamine 6G gets into the porous network structure through the solution and is adsorbed rapidly until saturation, and the last state is the saturation state. For MCC aerogels, the three stages were 0 to 20 min, 20 to 60 min, and after 60 min, respectively, while those of DMCC aerogels were 0 to 30 min, 30 to 120 min and after 120min. These findings corresponded with the liquid phase adsorption principle of porous adsorbent theoretically. Kinetic data deal with the pseudo-second-order kinetic model, in which the plot of t/qt versus t shows a linear relationship and can be expressed as (Eq. 4),

where qe is equilibrium adsorption capacity, and k2 is the second-order constant, which can be determined from the slope and intercept of plot t/qt versus t (Fig. 8b) and shown in Table 2. It shows a good agreement with experimental data with the pseudo-second-order kinetic model.

The diffusion model inside the particle can be expressed as (Eq. 5),

and the liquid film diffusion model can be expressed as (Eq. 6),

Table 3 shows that a better linear relation is obtained with the DMCC aerogels. However, all the fitted lines failed to pass through the origin of the graph, which indicates that the processes of diffusion inside the particle and liquid membrane diffusion influenced the adsorption on cellulose aerogels. The adsorption process was determined by their combined effects.

Effect of Raw Materials on the Adsorption Capability

From the above study, the structure and diffusion of pores inside aerogels are varied depending on the types of cellulose with different polymerization degree. The different adsorption capacities of rhodamine 6G on aerogels are shown in Fig. 10.

Fig. 10. The influence of cellulose on adsorption capability of rhodamine 6G 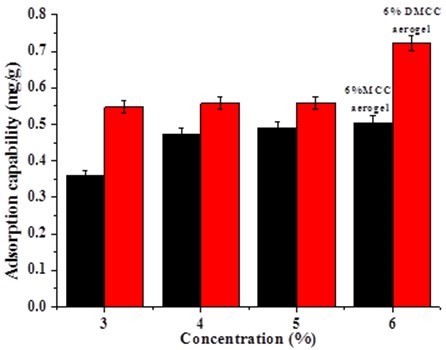 Adsorption of Oil and Organic Solvents

In this experiment, 0.1 g 6% DMCC aerogels was used to adsorb oil and organic solvents. As shown in Fig. 6 (b), the aerogels became transparent and hard after adsorption, and the adsorption efficiencies are presented in Fig. 11. 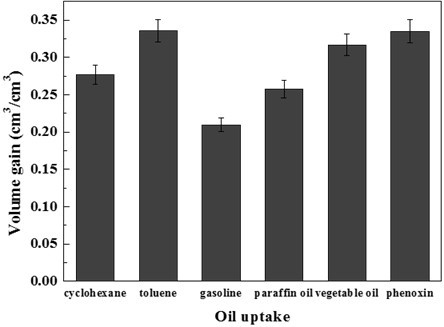 Fig. 11. Adsorption capacities of the DMCC aerogels for a range of organic solvents and oils in terms of its volume gain

2. The prepared cellulose aerogels were found to have high surface reactivity, extra-high porosity, and highly mechanical properties. The highest Young’s modulus was observed in the 5% MCC aerogel and the 4% DMCC aerogel.

This work was financially supported by the Science and Technology Program of Guangzhou, China (2014J4100039), the New Century Excellent Talents in University (NCET-13-0215), the Fundamental Research Funds for the Central Universities, SCUT (201522036), the Independent Study Projects of the State Key Laboratory of Pulp and Paper Engineering (2015C08, 2015ZD03) and the Opening Project of the Key Laboratory of Polymer Processing Engineering, Ministry of Education, China (KFKT-201401).