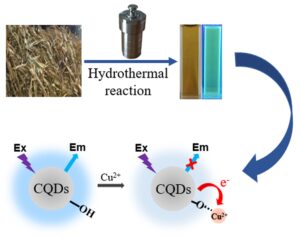 Agricultural straws, e.g., wheat straw and corn straw, which are major crop residues, consist of 28% to 36% cellulose, 23% to 28% hemicellulose, and 12% to 16% lignin (Jin et al. 2017). So far, nearly 27.1% of agricultural straw is used as roughage in livestock feed rations, approximately 14.1% is buried in soil for use as fertilizer, and approximately 32.3% is used as fuels, which causes air pollution and contributes to the greenhouse effect (Yuan et al. 2015). Hence, a new value-added strategy for the effective recycling of theses agricultural wastes is highly desirable.

Corn straw is one of the most common agricultural wastes in China. A high-value use of corn straw can relieve energy insecurity and reduce ecological pollution. Herein, corn straw was chosen as the model agricultural waste for CQD synthesis, providing a diverse use of corn straw as well as achieving a facile one-pot preparation of biomass-based CQDs. Moreover, when carbon quantum dots are in contact with metal ions, the phenomenon of fluorescence quenching occurs due to energy transfer, charge transfer and surface adsorption. Based on fluorescence quenching, the CQDs were applied for the highly selective and sensitive detection of Cu2+. Compared with other detection methods, the fluorescence detection method has the advantages of simple operation, no expensive equipment, and low price.

Corn straw was collected from wheat fields in Anhui, China. The chemical reagents were made by Xilong Chemical Reagent Co., Ltd. (Guangdong, China). All reagents were analytically pure and used as received.

Corn straw was crushed to a size of approximately 60 mesh for the hydrothermal preparation of CQDs. Typically, 1.0 g of corn straw was added to 30 mL of a 0.2 mol·L-1 HNO3 solution and heated in a water bath at a temperature of 50 °C for 4 h. Then, the mixture was moved into a 50 mL Teflon-lined autoclave and heated at a temperature of 180 °C for 13 h. The product was harvested via centrifugation at 8000 rpm for 10 min to remove the unreacted raw materials and large carbon products before finally being freeze-dried under vacuum.

where the subscript R is the reference, and K is the slope of the linear curve of the fluorescence integrated area against the absorbance (Gedda et al. 2016; Li et al. 2018).

In a typical Cu2+ detection experiment, 2 mL of a 500 mg·L-1 CQD solution was first added to a cuvette, and then 2 mL of a Cu2+ aqueous solution at a given concentration was injected. The resulting mixed solution was diluted to 10 mL with a phosphate buffer solution (PBS), with a pH of 6.7, and evenly mixed. The mixture was allowed to sit at ambient temperature 120 min to balance, and finally the FL intensity was measured under fluorescence excitation at 365 nm. The reaction time, volume of CQDs, type of buffer solution, pH effect, sensitivity, and selectivity were measured in triplicate for all experiments.

The UV-vis spectrum and fluorescence spectroscopy are shown in Fig. 1. The CQDs solution is a dark yellow under normal light and a blue-green under a 365 nm UV lamp (as shown in the Fig. 1 inset). The UV-vis spectrum of CQDs shows a sharp absorption peak at approximately 300 nm, which is ascribed to the π→π* electron migration from the sp2 hybridized clusters (Gedda et al. 2016; Yuan et al. 2018; Qi et al. 2019; Ren et al. 2019). The emission peaks of the CQDs are excitation-dependent with the excitation wavelength increasing from 310 to 390 nm, and the strongest emission occurs under excitation at 350 nm, with a peak at 440 nm. As the excitation wavelength increased from 350 to 390 nm, the maximum emission peak right-shifted from 433 to 460 nm together with the decreased emission intensity. This unique phenomenon can be attributed to the optical selection of different defect states on the surface of the CQDs (Su et al. 2018). The quantum yield of the CQDs was measured to be 4.64%.

Fig. 1. Absorption and fluorescence spectrum of the CQDs solution. The inset images are the corresponding fluorescence images under visible light and UV light (365 nm).

The morphology of the CQDs was observed via high-resolution transmission electron microscopy (HRTEM). As shown in Fig. 2, most of the particles were spherically shaped and monodispersed, without apparent aggregation, and their sizes were approximately 5 nm. Figure 2 reveals the crystallinity of the CQDs with a lattice fringe of 0.208 nm, suggesting that the CQDs are composed of sp2 graphitic carbons, sp3 carbon defects, and surface functional groups, e.g., -OH, C=O, and -NH (Zhu et al. 2013). The XRD pattern of the CQDs (Fig. 3) displays a strong peak at ca. 24 °, which reveals the amorphous carbon structure of the CQDs (Gedda et al. 2016).

Fig. 2. HRTEM image of the CQDs

Fig. 3. XRD spectra of the CQDs

Optimization of the Detection Conditions

The ideal time scale complexation between the CQDs and Cu2+ was explored. First, 2 mL of a 500 mg·L-1 CQD solution and 2 mL of a 50 mg·L-1 Cu2+ aqueous solution were mixed and diluted to 10 mL with distilled water. After that, the time-dependent Cu2+-CQDs fluorescence intensity curve was recorded (Fig. 6a). The results indicated that the fluorescence intensity of the CQDs weakened with time, and stabilized after 120 min. The ideal reaction time was set to 120 min for further experiments.

The CQDs content has a major role in deciding the fluorescence intensity and quenching in a system. Thus, a series of experiments with different CQDs solution volumes were carried out to determine the appropriate volume. The fluorescence quenching efficiency can be calculated according to Eq. 2,

where F0 and F correspond to the fluorescence intensities of the CQDs before and after adding Cu2+, respectively, and KSV is the Stern-Volmer quenching constant (Yang et al. 2019). The fluorescence intensity was enhanced as the volume of the CQDs solution increased. The quenching rate (F0–F)/F0 maximized at a volume of 2 mL (as shown in Fig. 6b), which was selected as the appropriate CQDs solution volume.

The buffer solution and the pH are two essential factors that can affect the sensing system. Thus, a series of experiments with different buffer solutions and pHs were investigated to identify the appropriate buffer solution and pH (Fig. 6c and 6d). At a pH of approximately 7.4 for all solvents, the fluorescence quenching rate (F0–F)/F0) was maximized when the solvent was PBS, which was chosen for the detection system (Fig. 6c). The effect of the pH was also tested at a range of 5.9 to 8.0 in PBS (Fig. 6d). It was found that the (F0–F)/F0 was maximized at a pH of 6.7, which was set as the appropriate pH.

where δ is the standard deviation of the blank experiments, and K stands for the slope of the calibration curve (Sun et al. 2019).

The selectivity was investigated by adding other metal ions (500 mg·L-1), including Zn2+, Co2+, Fe2+, Ni2+, Mg2+, Pb2+, Ag+, Mn2+, Cd2+, and K+. The fluorescence intensities of the CQDs before and after the addition of metal ions were recorded at 365 nm. The quenching changes with different metal ions are indicated in Fig. 8. Clearly, the fluorescence intensity of CQDs was further quenched in the presence of Cu2+ compared with the other metal ions. This may be because of the faster Cu2+ chelating kinetics and a higher affinity toward the oxygen-containing functional groups, e.g., -COOH, -OH, and -NH, on the surface of CQDs compared with other ions (Hu et al. 2014; Gedda et al. 2016; Xu et al. 2021). Furthermore, paramagneticism makes Cu2+ more easily adsorbed on the surface of CQDs (Murugan et al. 2019). Thus, the fluorescence of CQDs may be quenched by Cu2+ via electron transfer, in which Cu2+ acts as an electron acceptor to block the electron-hole link (Hu et al. 2014; Wang et al. 2019).

Fig. 8. Selectivity of the CQDs ﬂuorescence probe toward 50 mg/L Cu2+ over the coexisting cations under optimal conditions