One-step pyrolysis is a promising thermal degradation process that has a fast reaction rate and high energy efficiency. In this study, high performance bamboo activated carbon was successfully prepared by one-step pyrolysis with different pyrolysis times (2.5 h, 5 h, and 10 h). Using a high pyrolysis temperature of 1050 °C, the specific surface area was remarkably increased to 2348 m2/g, which was substantially higher than the findings reported previously by other studies. The mesopore ratio was increased to 77.4%, which indicated that the bamboo activated carbon mainly contained microporous carbon and the mesoporosity was considerably developed. The activated carbon was then applied successfully to remove Methylene Blue from aqueous solutions. The adsorption equilibrium data was fit best to the Langmuir model. The maximum adsorption capacity ranged from 495 mg/g to 1667 mg/g.

One-step pyrolysis is a promising thermal degradation process that has a fast reaction rate and high energy efficiency. In this study, high performance bamboo activated carbon was successfully prepared by one-step pyrolysis with different pyrolysis times (2.5 h, 5 h, and 10 h). Using a high pyrolysis temperature of 1050 °C, the specific surface area was remarkably increased to 2348 m2/g, which was substantially higher than the findings reported previously by other studies. The mesopore ratio was increased to 77.4%, which indicated that the bamboo activated carbon mainly contained microporous carbon and the mesoporosity was considerably developed. The activated carbon was then applied successfully to remove Methylene Blue from aqueous solutions. The adsorption equilibrium data was fit best to the Langmuir model. The maximum adsorption capacity ranged from 495 mg/g to 1667 mg/g.

Pyrolysis generates various gaseous, liquid, and carbon products. Most of the literature concerning pyrolysis has focused on activated carbon production (Xiao et al. 2007; Tian et al. 2011). Activated carbon is an excellent adsorbent that has a large pore volume and high specific surface area. It has been broadly used for purification, catalysis, separation, and energy storage (Ben-Mansour et al. 2016). However, extensive application of activated carbon is limited because of its high cost. Bamboo is an abundant and inexpensive natural resource, and has acted an alternative source for generating activated carbon. Typically, chemical (acid, strong base, or salt) or physical activation (water steam) under various conditions is used to prepare bamboo carbon. The results of earlier studies have shown that the Brunauer-Emmett-Teller (BET) specific surface area ranges from 488 m2/g to 2175 m2/g (Ip et al. 2008; Wang et al. 2008; Horikawa et al. 2010; Mui et al. 2010).

There are several studies on the applicability of bamboo in numerous adsorption processes. It has successfully removed dye from aqueous solutions, and the adsorption capacity was found to range from 143.2 mg/g to 454.2 mg/g (Kannan and Sundaram 2001; Hameed et al. 2007; Hameed and El-Khaiary 2008). Bamboo can also be used to remove impurities, such as metal ions or chloramphenicol, from liquid solutions (Wang et al. 2008; Fan et al. 2010). However, all of these activation methods, whether physical or chemical, have environmental consequences and drive up the processing cost. Therefore, more efficient methods are highly desirable.

A more efficient method is the one-step pyrolysis process (Xia et al. 2016a,b; Shi and Xia 2017), which is also named the self-activation process, as it uses the gases emitted from the biomass during pyrolysis to serve as an activation agent. The pyrolysis, activation, and carbonization processes are combined into one step. In the self-activation process, the pyrolysis gases, CO2 and H2O, serve as activation agents to activate the carbon. Therefore, the advantages of the one-step pyrolysis process are not only the creation of a high specific surface area, but also cost savings because no activating gas or chemical is used.

Moso bamboo is abundant in China and it is widely used. In this study, moso bamboo (Phyllostachys edulis) was used to produce activated carbon using the one-step pyrolysis process. Furthermore, the characteristics and adsorption properties of the resulting activated carbon were examined.

Moso bamboo was used for the preparation of bamboo activated carbon (BAC). Four-year-old bamboo was obtained from Anhui Province, China. The bamboo specimens were sawn from 1.5 m high of bamboo culm, and cut into 3.5cm(l)×2.5cm(b) ×0.6cm(h), which is shown in Fig. 1b. The bamboo specimens were then dried to 7% moisture content. The following procedure was performed (Xia and Shi 2016a,b). After placing the bamboo specimens into the box furnace chamber (Fig. 1a), the inner volume of the chamber was evacuated to a pressure of −97906 Pa ± 34 Pa (-73.4-mm mercury, 96.6% vacuum) and all of the valves were closed to create a sealed system without any mass exchange. Finally, during the pyrolysis stage, the temperature was increased to 1050 °C at a heating rate of 10 ℃/min, maintained, and then cooled to room temperature. The pyrolysis times were 2.5 h, 5 h, and 10 h and the prepared BACs were referred to as BAC2.5, BAC5, and BAC10, respectively. 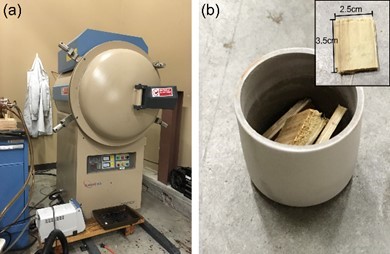 Characterization of the Bamboo Activated Carbon

To explore the adsorption performance of the activated carbon for adsorbing dye, Methylene Blue (MB) was selected. This dye is widely used in the dyeing industry and has a high stability. The MB dye was supplied by Tianjin Kemiou Chemical Reagent Company (Tianjin, China). Using a double beam ultraviolet spectrophotometer (UV 2800, SOPTOP, Shanghai, China) at 668 nm, the MB concentrations before and after the adsorption tests were determined. The BAC was added to the dye solutions (100 mL) with different initial concentrations (100 mg/L to 500 mg/L). The solutions were kept in an isothermal shaker (30 °C ± 1 ℃) for 48 h to reach a solid-solution mixture equilibrium. The isotherm experiments were conducted at 30 ℃. The amount of adsorption (q, mg/g) at equilibrium was calculated using Eq. 1 (Ghaedi and Kokhdan 2015),

where C0 and Ce (mg/L) are the liquid-phase concentrations of the dye at the initial and equilibrium conditions, respectively, V is the volume of the solution (L), and W is the mass of the dry adsorbent used (g).

The N2 adsorption and desorption isotherms of all of the samples are shown in Fig. 2. The isotherms of BAC2.5, BAC5, and BAC10 exhibited a hysteresis loop, which suggested the existence of mesopores in the carbon. This indicated that the BAC contains microporous carbons and the mesoporosity was considerably developed. When the pyrolysis time was increased, the hysteresis loop area also increased. The surface area was largest when the pyrolysis time was 10 h. This indicated a large amount of mesopores in BAC10. 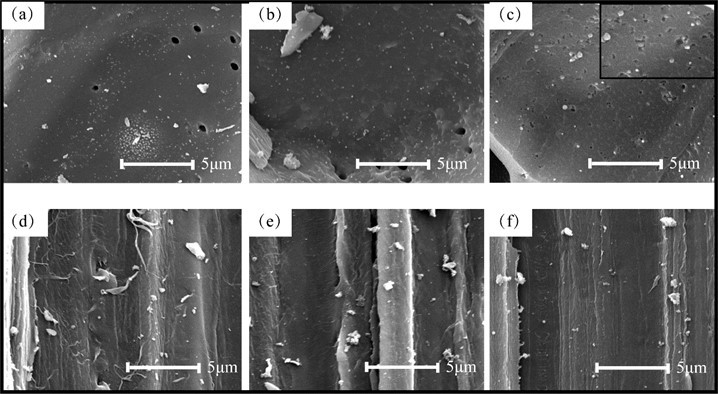 Table 1. Pore Characteristics of the BAC 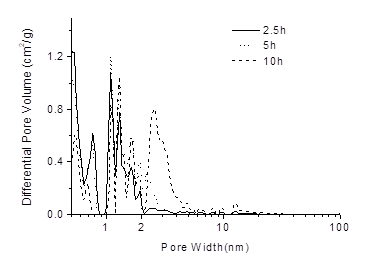 Fig. 4. Pore size distribution of the BAC at different pyrolysis times obtained by the NLDFT method

Adsorption of the Bamboo Activated Carbon 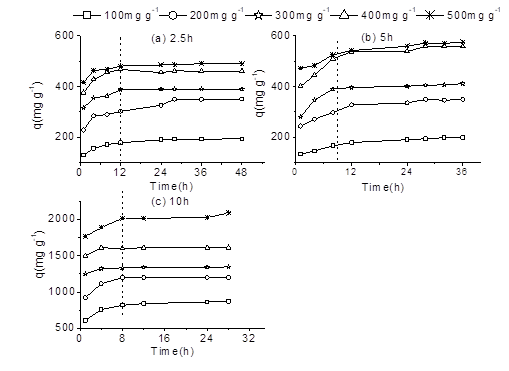 The Langmuir model is given by Eqs. 2 and 3,

where Ce is the equilibrium concentration of the adsorbate (mg/L), q is the amount of adsorbate adsorbed per unit mass (mg/g), KL is the maximum adsorption capacity (mg/g), and b is the Langmuir constant related to the adsorption rate.

A straight line for Ce/q against Ce was obtained, which indicated that the adsorption followed the Langmuir model.

The Freundlich isotherm model describes non-ideal adsorption on heterogeneous surface energies, and it is expressed as Eqs. 4 and 5 (Weber Jr. 1972),

where Ce represents the MB concentration at the equilibrium time (mg/L), n is the adsorption intensity, and Kf is the relative adsorption capacity (mg/g).

It was illustrated that the adsorbate is favorable on the adsorbent when n is greater than 1. Therefore, when the value of n is higher, then the adsorption intensity that can be obtained is more favorable (Ahmad and Alrozi 2011). A straight line for log qe versus log Ce was also obtained, which revealed that the dye adsorption followed the Freundlich isotherm.

The parameters calculated from the Langmuir and Freundlich isotherms are listed in Table 2. The coefficient of determination (R2) was used to evaluate the best-fitting isotherm. The Langmuir model had higher R2 values than the Freundlich model at each pyrolysis time. This indicated that the BAC surface was made up of more homogenous adsorption patches than heterogeneous adsorption patches (Özcan et al. 2007). Based on the Langmuir model, the maximum adsorption capacity for the three pyrolysis times ranged from 495 mg/g to 1667 mg/g.

Table 2. Langmuir and Freundlich Isotherm Model Parameters for the Adsorption by the BACs

To confirm the favorability of the adsorption process, a basic method by Weber and Chakravorti (1974) was used. This method shows the nature of favorable and unfavorable processes using a separation factor (RL), which is defined as Eq. 6,

where b is the Langmuir constant and C0 is the highest initial solute concentration (mg/L). 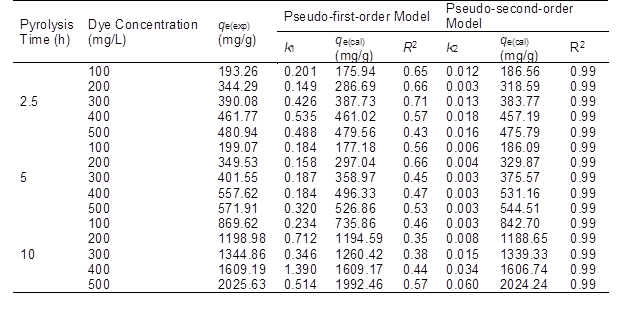 To evaluate the mechanism of the BAC adsorption process, pseudo-first- and pseudo-second-order kinetic models were used. The rate constant was determined with the pseudo-first-order kinetic equation (Eq. 7) (Langergren and Svenska 1898),

where qt and qe represent the amounts of dye (mg/g) adsorbed at time t (min) and equilibrium, respectively, and k1 is the pseudo-first-order rate constant (1/h).

The pseudo-second-order equation is expressed as Eq. 8,

where qt and qe represent the amounts of dye adsorbed at time t (min) and equilibrium, respectively, and k2 is the pseudo-second-order rate constant (g/mg·h).

where kID represents the intraparticle diffusion rate constant (mg/g·h1/2), which is obtained from the slope of the straight line of qt versus t1/2, and C represents the boundary layer effect.

It has been illustrated that when the C values are higher, the contribution of the surface sorption that can be obtained in the rate-controlling step is greater. 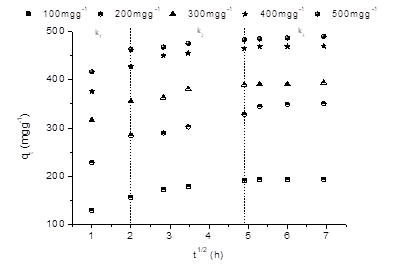 Fig. 6. Three typical stages of the intraparticle diffusion model for the BAC2.5

Figure 6 shows the intraparticle diffusion plots for MB adsorption by BAC2.5. It was clearly shown that the entire adsorption process had three stages. The first stage was the instantaneous adsorption stage up to 4 h, usually because of the strong electrostatic attraction between the adsorbent external surfaces and dye (Ahmad et al. 2014). The second stage was a gradual adsorption stage that proceeded from 4 h to 24 h and was related to the diffusion of dye molecules through the pores of the adsorbent (Hameed and El-Khaiary 2008). The third stage occurred after 24 h, where the adsorption trend started to slow down because of the extremely low adsorbate concentration in the solution (Wang et al. 2010). If linear lines pass through the origin, then the mechanism is only limited for the adsorption rate. However, this trend did not occur in this study, which indicated that intraparticle diffusion was not the only rate-limiting step. The three stages also occurred in the other two BAC samples (BAC5 and BAC10), although the specific times of the three stages had slight differences. The parameters for all of the BAC samples are shown in Table 4.

Table 4. Intraparticle Diffusion Model Parameters for the Adsorption by the BACs

The bamboo activated carbon (BAC) was prepared using the one-step pyrolysis process with pyrolysis times of 2.5 h, 5 h, and 10 h. The following conclusions can be drawn from this study:

For the microporous carbon, the specific surface areas ranged from 1456 m2/g to 2348 m2/g when the pyrolysis time increased from 2.5 h to 10 h.
A wide pore size distribution range from 0.04 nm to 60 nm was seen for all of the carbon samples and a high ratio of mesopores (77.4%) was seen for BAC10.
The activated carbon successfully removed MB from the aqueous solutions. The adsorption equilibrium data was fit best by the Langmuir model. The maximum adsorption capacity ranged from 495 mg/g to 1667 mg/g.
This BAC, which had the best adsorption capacity, could be used to develop a wastewater treatment field.

This work was supported by the Basic Scientific Research Funds of International Center for Bamboo and Rattan (1632018017) and USDA NIFA Foundation Program (Award No. 2017-67021-26138). On behalf of all of the authors, the corresponding author states that there is no conflict of interest.