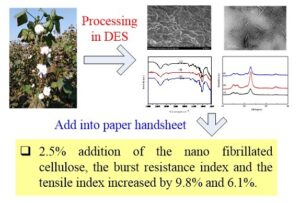 The bond strength and stability of the intermolecular network structure of cellulose play a decisive role in the tensile strength and rupture resistance of paper. In this work, the surface morphology, the chemical composition, and the crystal structure of nanocellulose prepared from cotton fibers were characterized by scanning electron microscopy (SEM) analysis, X-ray diffraction (XRD), and Fourier transform infrared spectroscopy (FTIR) to prepare cotton fiber nanocellulose by green solvent deep-eutectic solvent pretreatment combined with the ultrasonic method. Nanocellulose of different morphology and structure was used as a papermaking additive to explore its effect on the strength performance of the paper. The results show that the burst resistance index of the paper handsheets could be increased by 6.1% and 9.8%. The burst resistance index improved as the added amount of the NFC was increased.

The bond strength and stability of the intermolecular network structure of cellulose play a decisive role in the tensile strength and rupture resistance of paper. In this work, the surface morphology, the chemical composition, and the crystal structure of nanocellulose prepared from cotton fibers were characterized by scanning electron microscopy (SEM) analysis, X-ray diffraction (XRD), and Fourier transform infrared spectroscopy (FTIR) to prepare cotton fiber nanocellulose by green solvent deep-eutectic solvent pretreatment combined with the ultrasonic method. Nanocellulose of different morphology and structure was used as a papermaking additive to explore its effect on the strength performance of the paper. The results show that the burst resistance index of the paper handsheets could be increased by 6.1% and 9.8%. The burst resistance index improved as the added amount of the NFC was increased.

Paper is generally made from plant-derived materials, so its chemical composition is mainly comprised of cellulose, hemicellulose, and lignin. The microscopic morphology reveals that the diameter of the plant fibers is on the micrometer to millimeter level. The fibers are intertwined and woven into the network structure, so there is a large amount of hydrogen bonding to impact mechanical strength in the paper. When cellulose is converted to a nanofibrillar structure, it has excellent properties such as high mechanical strength, good thermal stability, large specific surface area, high transmittance, low density, and renewability, among others (Feng et al. 2018; Lu et al. 2019). Micro/nano fibrillated cellulose (MNFC), which also has been called cellulose nanofibril, can be used in the enhancement of biological composite materials and in the preparation of hydrogels, electronic devices, and papermaking auxiliaries. Many studies have reported the application of nanofibrillated cellulose (NFC) in the paper industry. For example, NFC has been used as an additive to improve the physical properties of paper (tensile strength, barrier properties, or the production of smart packaging paper) (Xiang et al. 2016; Sirviö 2019).

As a new type of ionic liquid analog, deep eutectic solvents (DESs) have been widely used in extraction, reaction, material processing, and electrochemistry. The DESs can be regarded as analogs to ionic liquids. They have favorable characteristics such as low cost, simple preparation process, non-toxic nature, low vapor pressure, and biodegradability (Alonso et al. 2016). Meanwhile, their properties can be tailored by varying the components and composition to satisfy the requirements of specific applications (Smith et al. 2014; Khandelwal et al. 2016; Mbous et al. 2017; Zdanowicz et al. 2018). The formation of DES requires a hydrogen bond donor and a hydrogen bond acceptor. These are provided by a mixture of salt and a hydrogen bond acceptor or anions of a hydrogen bond donor and salt. The use of DES for the extraction of active ingredients in plant tissues, the pretreatment of wood raw materials, and the preparation and functionalization of nanocellulose has become a widely researched subject (Ling et al. 2018; Zdanowicz et al. 2018; Douard et al. 2021). The high efficiency refining of raw wood materials with DES as a green solvent and the development of new DESs have great potential for future research and development. Some scholars have reported that cotton dissolved in DES composed of choline chloride and oxalic acid can be used to prepare micro- and nano-sized cellulosic fibers. Oxalic acid can form carboxyl groups on the crystalline surface of cellulose fibers, resulting in filamentation of the fibers and splitting of crystal surfaces to form nanocellulose with low crystallinity and flakiness. Yu’s group studied the efficient preparation of nanometer fiber in DES using microwave heating combined with the high intensity ultrasonic vibrations. They found that the treatment’s effect on surface, morphology, and thermal stability of nanocellulose is similar to that of sulfuric acid treatment (Liu et al. 2017), while the processing cycle is significantly shortened. This work is expected to replace the traditional technology of preparing nanocrystalline cellulose by concentrated sulfuric acid hydrolysis and improve the industrialization of nanocrystalline cellulose preparation. However, all these latest studies do not provide information on the yield and application of nano-sized cotton fibers. Since the properties of DES vary with its combination of component and composition, new acidic natural DESs can be designed and synthesized for extraction of cellulose. In these extractions, the presence of acid and hydrogen bonding are helpful in breaking the original structure of the cellulose. Therefore, this study investigated the preparation of nano-sized cellulose from cotton fibers with a new DES.

In this study, ultrasonic waves combined with betaine/oxalic acid DES pretreatment were used to prepare nanofibrillated cellulose from cotton fibers. By optimizing the treatment time and the concentration, nanocellulose with a high yield was prepared. Scanning electron microscopy (SEM), X-ray diffraction (XRD), Fourier-transform infrared spectroscopy (FTIR), and thermogravimetric analysis (TGA) were used to characterize and test the properties of the prepared nanocellulose. Nanocellulose with different morphological and structural characteristics were used as paper auxiliaries and applied in the papermaking process to explore the influence of nanocellulose on the strength of paper.

The 1:2 M ratio of acidic DES was produced by stirring 63.0 g of oxalic acid dihydrate and 69.8 g of betaine continuously for 30 min at 90 °C in a glass reactor. Cotton fibers weighing approximately 0.1 g were added to the reactor. At the end of the treatment, 200 mL of deionized water was added to the reactor to reduce the viscosity of the mixture. The treated cellulose was washed and filtered. The pretreated fibers were first mixed with water at a concentration of 0.5 wt%. The suspensions were then processed using a JY99-IIDN ultrasonic generator (Scientz Biotechnology Co., Ltd, Ningbo, China) equipped with a 25 mm cylindrical titanium alloy probe. The ultrasonication was conducted at a frequency of 20 kHz with an output power 1000 W for 20 min.

The chemical compositions of the cotton and the nanocellulose were determined. The morphology of the pretreated cotton fibers was observed using a JSM-7500F scanning electron microscope (SEM) (JEOL, Tokyo, Japan) at 15 kV. The samples were coated with platinum using a vacuum sputter coater before they were observed.

In the paper application test, a range of length nanocellulose (50 to 100 μm) was poured into the disperser and dispersed for 5,000 revolutions. The mixed pulp was then placed in a manual paper making machine, which was made from a Rapid Köthen type laboratory sheet former (ISP mod. 786FH) according to ISO 5269-2. Handsheets were prepared and evaluated according to the standard method of TAPPI TIP0502-17 and T 205 sp-02. When operating the sheet-forming machine (RK3AKWT), the stainless-steel mesh or copper mesh is placed at the bottom of the molding cylinder, and the slurry and water are added. The slurry is evenly dispersed with the stirring paddle, and the vacuum lever is manually pulled to introduce vacuum and pull the water quickly from the paper quickly. The paper is removed from the wire mesh, and it is stored in the constant temperature and humidity room after drying.

About 30 g cotton pulp was diluted to 10.0 wt% by deionized water, and then beaten using a PFI mill (HAMJERN MASKIN 621) according to TAPPI method T248. The pulp was refined to 55 °SR. After that, the refined pulp was weighed and evenly dispersed in the pulp disintegrator for 10,000 revolutions. A selected amount of nanocellulose was added into the disintegrator for another 5,000 revolutions. The mixed slurry was used for preparing papers by a handsheet former (RK3AKWT).

A 30 mg oven-dry pulp sample was weighed and diluted in 1 L water so that the fibers were evenly dispersed in water. The dispersed slurry was placed in the instrument (Morfi Compact, Techpap) for testing.

The tensile strength of the handsheets was measured according to TAPPI T 403 om-02. Each sample was placed between the upper and lower chuck of the tester. Care was taken that the sample exceeded the entire area of the upper chuck. The L&W burst tester was started. The data were read after the breakage of specimens.

The tensile strength and whiteness of the handsheets were measured according to TAPPI T494 om-01 (2001) and TAPPI T562 pm-96 (1996), respectively. The sample was cut into a size of 15 mm × 15 cm, placed in the L&W tensile strength meter for testing, and the display data was read.

The optical properties of the handsheets were measured according to ISO2470:1999. Ten layers of paper and five test points were used for each test. The color information of the specimens was quantified using the ColorTouch PC CTP-ISO; Technidyne, New Albany, IN, USA). The specific steps are as follows: Open the instrument test software Color Touch and select ERIC 950 in the File bar to enter the residual ink test interface. Then place a stack of samples (opaque) in the light path, select System Settings in the System bar to set test points before the test, and then press the Start button to Take Sample for the test. After that, place a single Sample on the black cylinder for the test and record the final result. In the File bar, select Color Brightness to test whiteness. The test steps are roughly the same as the operation steps. After the test, the black tube was placed back into the black plastic bag and power turned off.

TEM micrographs of the nanocellulose are shown in Fig. 3. The nanocellulose was prepared by eutectic solvent is a structure composed of cellulose fibrils with diameters of about 5 nm. The temperature of deep eutectic solvent and subsequent mechanical treatment affect the dimensions of the resulting nanocellulose. Under relatively mild temperature conditions, there were still large fiber bundles, as shown in Fig. 43a). The fibril diameters were in the range 100 to 200 nm and showed individual fibrils structure. Based on the appearance reveal in such micrographs, the authors judged that the nanocellulose could be classified as nanofibrillated cellulose (NFC).

Fig. 4. FTIR spectra of the cotton fibers and the NFC

The cotton fiber length, the fiber width, the curl index, the kink index, and the fine fiber content when the beating degree was 50 °SR are shown in Table 1.

As can be seen in Table 3, the strengthening trend of the tensile index for the paper handsheets with different additive amounts of cotton fiber NFC was consistent with the burst resistance index. There was little difference in the tensile index between the handsheets with 2.5% or 5% lignocellulosic NFC contents. This may be because the size of the lignin fiber NFC was too small for the paper-based fiber of this project, and a slight change in the addition amount was not enough to reflect the advantages of the enhancement.

Sirviö, J. A. (2019). “Fabrication of regenerated cellulose nanoparticles by mechanical disintegration of cellulose after dissolution and regeneration from a deep eutectic solvent,” Journal of Materials Chemistry A 7(2), 755-763. DOI: 10.1039/C8TA09959F