Alkali-oxygen pulping has received increasing attention as an environmentally compatible pulping process; however, the resulting pulp has low yield and properties due to carbohydrate degradation. In this work, the effect of regulating superoxide anion radicals (O2-•) on delignification selectivity in alkali-oxygen pulping was investigated. The pulp was characterized by Brunauer-Emmett-Teller (BET) analysis, scanning electron microscope (SEM), and X-ray diffraction (XRD). Lignin removal was improved by the regulation of O2-• in the 1,2,3-trihydroxybenzene auto-oxidation system with addition of sodium 2-anthraquinonesulfonate, especially for the pulp from cooking time 120 min. The degree and selectivity of delignification were improved with alkali-oxygen pulping when sodium 2-anthraquinonesulfonate was added to facilitate the generation of superoxide anion radicals. The results showed that the increased fiber liberation was beneficial for the accessibility of O2-• to lignin, which would improve the removal of lignin with negligible damage on cellulose, especially with regards to crystal area.

Alkali-oxygen pulping has received increasing attention as an environmentally compatible pulping process; however, the resulting pulp has low yield and properties due to carbohydrate degradation. In this work, the effect of regulating superoxide anion radicals (O2-•) on delignification selectivity in alkali-oxygen pulping was investigated. The pulp was characterized by Brunauer-Emmett-Teller (BET) analysis, scanning electron microscope (SEM), and X-ray diffraction (XRD). Lignin removal was improved by the regulation of O2-• in the 1,2,3-trihydroxybenzene auto-oxidation system with addition of sodium 2-anthraquinonesulfonate, especially for the pulp from cooking time 120 min. The degree and selectivity of delignification were improved with alkali-oxygen pulping when sodium 2-anthraquinonesulfonate was added to facilitate the generation of superoxide anion radicals. The results showed that the increased fiber liberation was beneficial for the accessibility of O2-• to lignin, which would improve the removal of lignin with negligible damage on cellulose, especially with regards to crystal area.

The ratio of p-hydroxyphenyl-to-guaiacyl-to-syringyl (H:G:S) units of bagasse lignin is 2:38:60 (Río et al. 2015); the high content of syringyl units is beneficial for improving the delignification rate (Yang 2010). In the bulk phase of alkali-oxygen pulping, primarily -O-4, -5 and other condensed substructures (Río et al. 2015) could be removed as much as possible due to lower oxygen delignification resistance (Agarwal et al. 1999; Poukka et al. 1999). In addition, the delignification selectivity is remarkable because the reactive activity of cellulose mainly affected by the accessibility of fiber (Lin et al. 2018) and less fiber was exposed during the initial cooking. However, the delignification selectivity decreased after the end of the bulk phase, leading to an increase in carbohydrate degradation and a decrease in lignin depolymerization and removal.

Several researchers have demonstrated that oxygen delignification involves free radicals in the reaction process, including HOO•, O2-• and HO•, and the lignin removal is mainly governed by the interplay of O2-• and HO• (An 1998; Gierer et al. 2001; Liu 2008). When oxygen molecules have absorbed a certain amount of energy, they could be excited to form a singlet oxygen, which decays to ground state oxygen before it contacts with other substances. The ground state oxygen is excited and accepts one electron to form O2-•, and then it accepts electrons and protons to form HO• and a series of reactive oxygen-containing species (Zhao 1999). HO• can combine with aromatic -electrons to generate cyclohexadienyl adducts, which can transfer one electron from O2 to form O2-• (Liao and Reitberger 2013). The electron transfer from O2-• to aromatic ring formed HO• and H2O2, then H2O2 can further react with transition metal ions to form HO•, a strong oxidant, via catalytic mechanism. The specific reactions (Gierer et al. 1994) are presented as follows: 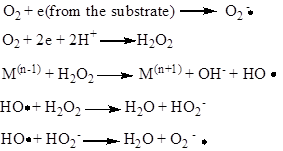 Carbohydrate degradation is mainly caused by HO• (Ek et al. 1989; Gratzl 1992; Guay et al. 2000; Reitberger et al. 2001). O2•- has a low oxidation potential of 0.41V, (Gierer 1997; Ragauskas et al 2005). However, it also could degrade aromatic rings and conjugate a double bond, especially under the synergy with HO•, and it has little effect on carbohydrate. Hence, it is important to regulate the reactions of O2-• and HO• with lignin in order to improve alkali-oxygen pulping selectivity. Several researchers have suggested that sodium 2-anthraquinonesulfonate can facilitate O2-• generation and can improve delignification selectivity during oxygen delignification of bamboo kraft pulp (Cao et al. 2006; Cao et al. 2007; Gümüşkaya et al. 2011). However, the scientific literature does not report on the control of O2-• during the alkali-oxygen pulping of bagasse in order to improve delignification selectivity.

In this study, the bagasse pulp was treated by 1,2,3-trihydroxybenzene auto-oxidation system, which could generate O2-•, to reveal the effect of O2-• on delignification of alkali-oxygen pulp. Afterwards, the characteristics of the resulting bagasse pulp were investigated to measure differences in delignification selectivity during the pulping process. Finally, the sodium 2-anthraquinonesulfonate was added as O2-• promoter to improve the pulping properties, and the resulting pulp was characterized by BET, SEM and XRD to determine the mechanism of improved delignification selectivity.

Air-dried and de-pithed sugarcane bagasse was provided by the Yunnan Xinping Nan’en Sugar and Paper Co., Ltd. (Yunnan Province, China). Sodium 2-anthraquinonesulfonate was purchased from the Shanghai Aladdin Reagent Co., Ltd. (Shanghai, China). Other chemical reagents used were of analytical grade and were made in China.

O2-• was produced by the auto-oxidation of 1,2,3-trihydroxybenzene. The bagasse alkali-oxygen pulp, 1,2,3-trihydroxybenzene solution, and 100 mmol/L tris(hydroxyl-methyl)aminomethane hydrochloride (Tris-HCl) buffer solution (pH = 8.2) were mixed in a plastic bag, the pulp consistency was adjusted to 12% by distilled water, and the reaction was performed at 60 °C for 60 min in water bath.

Various charges of sodium 2-anthraquinonesulfonate was added to the plastic bag for the reactions of O2-• with bagasse pulp as the radical promoter.

The resulting pulp was thoroughly washed with tap water and then screened with a 0.2 mm sieve plate. Afterwards, the pulp was fluffed and placed in a sealed plastic bag for 24 h prior to its characterization measurements. Pulping yield was determined gravimetrically on the samples following drying at 105 ± 2 °C for 8 h. The kappa number and intrinsic pulp viscosity were determined in accordance to TAPPI T238 and SCAN-CM l5:88 test methods, respectively. Delignification selectivity was calculated based on the following equations (Shi and He 2003; Zou et al. 2007),

The resulting pulp was thoroughly washed with tap water, air-dried, milled to pass through a 250-mesh screen, and dried at 105 °C to constant weight. The screened material was characterized by X-ray diffraction. X-ray diffraction patterns were recorded using Cu Kα ( = 0.154 nm) radiation at 40 kV and 100 mA. A Rigaku DMAX-3B diffractometer (D8 Advance Bruker, Scintillation, Germany) was used. Data were collected for a 2 range between 5 and 90° with increments of 0.02° at a scanning speed of 3°/min. The crystallinity index was calculated,

The average pore diameters and the pore size distributions of the pulps were measured by using a BJH surface area and pore size analyzer (NOVA2000e, Quantachrome Instruments, Boynton Beach, FL, USA), which is based on the Brunauer-Emmett-Teller (BET) nitrogen adsorption isotherm principle. The air-dried pulps were milled and screened with 40/60 mesh screens; the screened material was oven-dried at 105 °C for 4 h.

Proposed Concept for Improving the Delignification Selectivity by the Regulation of O2-• in Alkali-Oxygen Pulping
Figure 1 presents a hypothetical mechanism for improving alkali-oxygen delignification selectivity. The proposed mechanism is based on the following premises.

(2) Sodium 2-anthraquinonesulfonate can facilitate the generation of O2-• during alkali-oxygen pulping.

Several researchers have reported that O2-• is generated by the 1,2,3-trihydroxybenzene auto-oxidation reaction (Marklund and Marklund 1974; Gao et al. 1997; Alanko et al. 1999). Gierer et al. (1994) and Reitberger et al. (2001) indicated that O2-• has the ability to react with phenolic and carbon-centered radicals, which results in aromatic ring opening or cleavage of a carbon-carbon bond in the aliphatic side chain. Cao et al. (2006) proposed that addition of sodium 2-anthraquinonesulfonate during oxygen delignification of bamboo pulps could effectively improve the delignification degree and selectivity. Hence, this paper will present enhanced delignification selectivity by the addition of sodium 2-anthraquinonesulfonate during the alkali-oxygen pulping of bagasse, which results in good quality pulp.

Reaction of O2-• with Bagasse Pulp

In summary, examination of the results on O2-• to delignify at various pulping times suggested that the optimum delignification efficiency occurred at 120 min. To further improve the delignification selectivity, the O2-• promoter should be added at alkali-oxygen pulping time of 120 min.

Table 2. Effect of Sodium 2-Anthraquinonesulfonate Salt on the Reaction of Bagasse Pulp with O2-• from the 1,2,3-Trihydroxybenzene Auto-Oxidation System

The pulping results from alkali-oxygen cooking are shown in Figs. 2 and 3. Pulp yields obviously decreased. The delignification rate was high, which was 66.0% after the first 60 min; afterwards, the rate decreased. The average fiber pore size reached its maximum value and the cellulose crystallinity index increased within the first 60 min. This was attributed to the dissolution of lignin and hemicelluloses. While after 60 min, the delignification rate increased slowly with prolonged cooking time due to the decrease in alkali content and increase in activation energy (Chang et al. 1973; Nada et al. 1998). The decreased delignification selectivity resulted from the condensed phenolic units in residual lignin, LCC structure (Li 1999; Torbjörn et al. 2001), and the exposure of carbohydrate (Heiningen and Ji 2012). Especially after cooking for 180 min, the degradation of carbohydrate increased.

The lignin was removed with high efficiency within the first 60 min of alkali-oxygen pulping, and the fibers were separated. The average pore size of the fibers increased from 7.19 nm to 12.74 nm within the first 60 min (Table 3). The removal of lignin and hemicelluloses from the cell wall opened the fiber structures and formed more voids among fibrils (i.e., new pores with size less than 10 nm), which resulted in a decrease of average pore size after 60 min of pulping time (Jiang et al. 2016; Huang et al. 2017). The average pore size of the fibers increased and more voids among fibrils formed, which caused the fiber cell wall to become loose and expose lignin to chemical liquor and active oxygen, which would improve the accessibility of the pulp.

The crystallinity index increased at first, which can be ascribed to many uncondensed phenolic units and olefinic structures, such as stilbenes and enol ethers becoming degraded and dissolved out (Ljunggren 1990; Zhen et al. 2018; Zhang et al. 2018). The crystallinity index declined after cooking for 120 min, which means that the fibers crystalline areas were damaged as a consequence of the increased of swelling degree and the number of voids. These changes would improve the accessibility of alkali to fiber. These results are in agreement with an earlier study (Ma 2014). 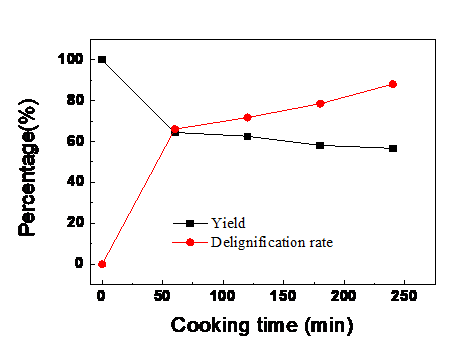 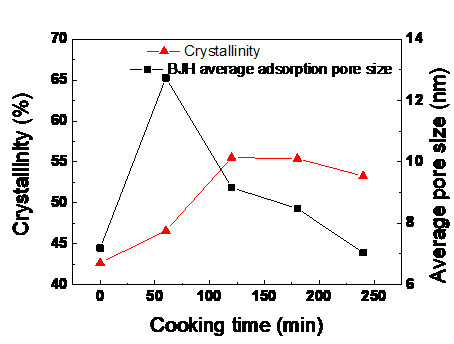 Fig. 3. Effect of alkali-oxygen pulping time on crystallinity index and average pore size of the pulp

Effect of O2-• Promoter on Alkali-oxygen Pulping
The effect of sodium 2-anthraquinonesulfonate (O2-• promoter) addition at 120 min during alkali-oxygen pulping is shown in Table 4. As the O2-• promoter charge increased from 0% to 0.2%, the pulping yield and the intrinsic viscosity increased, and the kappa number decreased from 15.8 to 12.8. When the O2-• promoter charge increased from 0.1% to 0.2%, the crystallinity index increased (Table 5), and the pore size distribution that was less than 10 nm and between 10 and 50 nm decreased, which demonstrated that the facilitated generation of O2-• could improve the removal of lignin (Gang et al. 2010) in alkali-oxygen pulping system. Bielski and Allen (1977) demonstrated that superoxide anion radicals have a lifetime of about 1 s with pH=7 condition, and the lifetime of O2-• was prolonged when the pH value increased. Therefore, it is interesting to note that O2-• has strong penetrability and lifetime in loose structure raw material alkali-oxygen pulping. Thus, the lignin could be degraded into small molecules and dissolved out by O2-• without breaking up the cell walls

Table 5. Effect of O2-• Promoter on the Structure of Bagasse Fiber

The above observations indicated that carbohydrate degradation decreased and delignification selectivity increased with the addition of O2-• promoter in the alkali-oxygen pulping process.

The authors gratefully acknowledge the financial support from the National Natural Science Foundation of China (Grant No. 21466017 and 31460176) as well as the Opening Project of Guangxi Key Laboratory of Clean Pulp and Papermaking and Pollution Control (Grant No. KF201718 and KF201602).

van Heiningen, A., and Ji, Y. (2012). “Southern pine oxygen delignified pulps produced in a Berty throughflow reactor: how to obtain the highest degree of delignification while maintaining pulp yield and quality,” Tappi J. 11(3), 9-18.

Samuelson, H.O., and Abrahamsson, K.E. (1978). “Oxygen-alkali delignification of lignocellulosic material in the presence of a manganese compound,” U.S. Patent No. 4,087,318.