Selected physical parameters of spruce chips vs. alkali consumptions in the impregnation step of kraft pulping 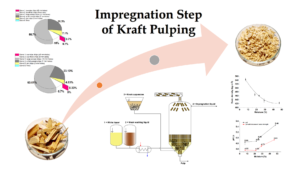 The uniformity of pulp and the amount of rejects are influenced by many factors, but impregnation can be the most important. The opportunities for improving impregnation of kraft white liquor start in description of the parameters affecting the process. The first parameter is the chip itself (its basic density, moisture, and pH) and the second is the process parameters set by the technological possibilities of the digester. During outside storage, the chips deteriorate via the fungal stains, brittleness, and high acidity. The moisture content also decreases. Understanding the relationships of chip parameters in the impregnation step and amount of rejects requires the assignment of effective alkali consumption. This study shows the effects of selected physical parameters, such as bulk density, moisture, and pH, of spruce chips on alkali consumption during impregnation step of a Super Batch process.

Selected Physical Parameters of Spruce Chips vs. Alkali Consumptions in the Impregnation Step of Kraft Pulping

The uniformity of pulp and the amount of rejects are influenced by many factors, but impregnation can be the most important. The opportunities for improving impregnation of kraft white liquor start in description of the parameters affecting the process. The first parameter is the chip itself (its basic density, moisture, and pH) and the second is the process parameters set by the technological possibilities of the digester. During outside storage, the chips deteriorate via the fungal stains, brittleness, and high acidity. The moisture content also decreases. Understanding the relationships of chip parameters in the impregnation step and amount of rejects requires the assignment of effective alkali consumption. This study shows the effects of selected physical parameters, such as bulk density, moisture, and pH, of spruce chips on alkali consumption during impregnation step of a Super Batch process.

One of the main problems in the production of sulphate (kraft) pulp is extensive losses of wood mass in the form of rejects. With the rising prices of wood as the primary raw material for pulp production, there is also a growing effort to minimize these losses. Between the various steps of the sulphate batch, the impregnation of the wood chips appears to be a potential step to improve the batch by providing a homogeneous distribution of chemicals inside the chip (Garemark 2018). Much knowledge has been gained about the factors that influence the process of penetration of various fluids into wood chips over the decades (Malkov 2002). The first category is the factors related to wood chips (dimensions of chips, the moisture, and air contents), the second category is the parameters of impregnating liquid (concentration, composition, surface tension, and viscosity), and the last is process conditions, such as temperature, time, and pressure, which correspond to process and design options of the device (Malkov et al. 2001). The effect of temperature is significant also with association of dynamic viscosity when the value of liquor dynamic viscosity decreases with increasing temperature, and also the rate of surface tension will decrease with temperature.

Wood is a heterogeneous biomaterial that is easily subject to dimensional changes, environmental, and biological influences (Ding et al. 2008). Likewise, wood types and conditions are undoubtedly essential for the degree of impregnation, along with chemical properties and impregnation conditions (Wang and Yan 2005).

Because wood is highly porous, its high porosity ensures the transport of water in a living tree. However, it is not uniformly permeable to gases and liquids flowing into or through it (Sixta 2006).

Wood, as a basic raw material processed in pulp mills, is complex in its structure and morphology. To quantify the process, the wood fibres correspond to the dry matter content and water that is bound in the internal structure and also on its surface. Before the wood is transported to the digester, it goes through several operations: debarking, chipping, sorting, etc. Sorting is followed by a storage process during which certain physical changes occur in the chip structure. The initial moisture content of wood chips and its changes during storage are important (Wästerlund et al. 2017). A long storage period for wood chips can lead to a drop in moisture content and high acidity. Decreasing moisture content can also lead to a less accessible pore structure (smaller pores or closure of pores). The temperature in the piles on which the chips are stored can reach 60 to 70 °C (Sithole 2005). At this temperature, chemical reactions occur in which the acetyl groups present in the hemicellulose molecules are cleaved off to form acetic acid. The consequence of this reaction is the production of heat and an increase in the acidity of the pile. The acid in large quantities causes damage to the chips by attacking the cellulose chain molecules, resulting in a loss of yield (Wolfaardt and Rabie 2003).

Through increasing the acidity and heat, the wood gradually darkens until it finally disintegrates. In some extreme cases, the pH of the wood chips can reach 3.5, which leads to high consumption of up to 30 g of 0.1 N sodium hydroxide per gram of wood during neutralization. Therefore, the equivalent amount of alkali is consumed before the actual batch starts (Sithole 2005). The use of larger quantities of such damaged chips requires high doses of cooking liquids, which usually result in low yields and larger amounts of rejects (Fuller 1985).

Another factor emanating from wood chips as an impregnated material is their dimensions. The most important dimension of the chip, in terms of achieving the most effective impregnation, is its thickness. Only a fraction of the sorted chips should enter the digester. This fraction makes up more than 85% of all incoming chips. If the homogeneity of the impregnation is related to the moisture content in addition to the size of the chips, then the density of the chips and thus their porosity is also related to it. Porosity depends on density. As density increases, the porosity of the wood decreases (Požgaj et al. 1995).

The sulphate pulping batch process starts at the moment when the necessary chemicals are transported into the chip structure. During the penetration and diffusion operations taking place during the impregnation step, various chemical reactions occur. The most prominent of these is deacetylation of hemicelluloses, followed by neutralization, minor delignifications, and carbohydrate degradation. Some of these reactions reduce the yield, while others cause the chips to defibrillate more easily in the batch process. It is necessary to understand the chemical phenomena to take advantage of the beneficial reactions while avoiding those undesirable events in the impregnation process. At the end of the impregnation step, the chips in the digester are surrounded by a liquid called free black liquor. As a result of penetration and diffusion, the wood chips contain bound black liquor in their structure. Therefore, the impregnated chips as well as the impregnation liquor must be analyzed to obtain impregnation efficiency (Garemark 2018).

The experiment consisted of taking a sample of wood chips fed into the digester and then determining its fractional composition. The moisture of the chips was also determined. A balance scheme (Fig. 1) was prepared based on data on the concentration and amount of individual streams entering the digester. With this information, it was possible to calculate the initial concentration of effective alkalis (EA). In the process of displacing the impregnation liquid from the digester, a sample of the liquor was taken and analyzed by titration method at pH 11 to obtain residual EA concentration data. Based on the inlet and outlet concentrations, the alkali consumption in the sulphate batch impregnation process was determined.

Chip 3A fractions (larger size acceptance) sorted on Somerville-type equipment (Lorentzen & Wettre, Štětí, Czech Republic) according to SCAN-CM 40:01 (2001) were used for analysis. The SCAN-CM 39:94 (1994) method was used to determine the moisture content, which gave an indication of the dry matter content, from which the absolute moisture content was subsequently recalculated. The SCAN-CM 43:95 (1995) method is used to determine the reduced wood density. Hot extraction was used to obtain wood chip pH data, boiling 50 g of wood chips in 200 mL of distilled water for 10 min. The mixture was then cooled and decanted and the pH of the solution was measured. To measure the pH with increased ionic strength, 180 mL of distilled water and 20 mL of 0.2 M NaCl were added to 50 g of chips.

Wood normally dries out during storage because it loses its unbound water. Another effect of wood storage is the decrease of the pH caused by enzyme-catalyzed hydrolysis of acetate groups of hemicellulose. Wood that is chopped and used in a sulphate batch as the main source of pulp production is impregnated with a mixture of black (NaOH concentration of 4 g/L) and white liquors (NaOH concentration of 110 g/L) of a certain concentration. The consumption of these alkalis is closely linked to the original amount of water contained in the wood chips. Therefore, this study is based on the description of the physical parameters of spruce chips Picea abies: basic density, wood pH, and pH with increased ionic strength related to the moisture content in the wood structure, which gradually decreases during the storage process. From the measured data of basic density shown in Fig. 2 (defined as the oven-dry mass of a wood sample divided by its green volume), it is clear that the value of the reduced density of spruce chips decreased with increasing moisture.

Fig. 3. Fractional composition of chips falling into the digester in the spring months (a) and summer months (b)

The obtained data clearly show that storage of chips decreased their moisture content, and because of this the pH decreased (Fig. 2). The effect of fractional composition on alkali consumption was not remarkable, but the chip thickness as a parameter was important due to the possible overflow of raw materials through the digester screens.

In the summer months, when the moisture content of the wood is lower, the pH value increases, which also has a major influence on the consumption of effective alkali. Figure 4 also clearly shows that as the dry matter content increased, the consumption of alkalis for wood also increased.

The authors wish to acknowledge the Mondi Štětí a.s. for the technical and scientific support in this research and Ministry of Education, Science, Research and Sport of the Slovak Republic for the financial support of this research by grant KEGA 036STU-4/2020. This publication was created on the basis of the projects “ACCORD” (ITMS2014+ project code: 313021X329) and “CEVIS Science” (ITMS2014+ project code: 313021BXZ1) supported by Operational Programme Integrated Infrastructure and funded by the European Regional Development Fund.

SCAN-test Methods are issued and recommended by KCL, PFI and STFI-Packforks for the pulp, paper and board industries in Finland, Norway and Sweden. Distribution: Secretariat, Scandinavian Pulp, Paper, Board Testing Committee, Box 5604, SE-114 86 Stockholm, Sweden.