Raw bio-oil was pretreated and tested for hydrodeoxygenation (HDO) using three types of the commercial catalysts (HT-36, HT2300, and HT951T) to improve physio-chemical properties and enhance hydrocarbon yields. The three catalysts prompted different levels of hydrodeoxygenation, and the organic phase products (OLPs) yields were 25.30, 27.83, and 13.05 wt%, respectively. Moreover, OLPs had lower water content, total acid numbers (TAN), and O content as well as higher heating value (HHV), C, and H contents. For the three catalysts, HT-36 had the best HDO effects, resulting in 34.8% hydrocarbon production with improved HHV, water content value and TAN as well as element contents. The different level of HDO depended on the catalyst components, structure, and morphology. This research is beneficial for the selection and preparation of effective catalysts for bio-oil upgrading.

Raw bio-oil was pretreated and tested for hydrodeoxygenation (HDO) using three types of the commercial catalysts (HT-36, HT2300, and HT951T) to improve physio-chemical properties and enhance hydrocarbon yields. The three catalysts prompted different levels of hydrodeoxygenation, and the organic phase products (OLPs) yields were 25.30, 27.83, and 13.05 wt%, respectively. Moreover, OLPs had lower water content, total acid numbers (TAN), and O content as well as higher heating value (HHV), C, and H contents. For the three catalysts, HT-36 had the best HDO effects, resulting in 34.8% hydrocarbon production with improved HHV, water content value and TAN as well as element contents. The different level of HDO depended on the catalyst components, structure, and morphology. This research is beneficial for the selection and preparation of effective catalysts for bio-oil upgrading.

Fast pyrolysis is the thermal decomposition of biomass in the absence of air to produce a liquid (bio-oil) precursor to fuels and chemicals. Fast pyrolysis applies a high heat transfer rate to the biomass particles, a very short vapor residence time in the heating zone, and the rapid condensation of the pyrolysis vapors to produce bio-oil (Luo et al. 2016a, b). Bio-oil is a dark, viscous liquid with a higher heating value (HHV) of 17 to 18 MJ/Kg. The presence of water and numerous chemical compounds in a variety of reactive functional groups such as carbonyl compounds (aldehydes and ketones), acids, esters, phenols, etc., makes bio-oil highly oxygenated, acidic (pH 2.5), and subject to phase separation and polymerization over time or with heating (Bridgwater and Meier 1999; Elliott et al. 2012).

A two-stage method was developed by adding a full deoxygenation hydrocracking step to the mild partial deoxygenating (Elliott and Baker 1989; Baker and Elliott 1993). This partial step by hydrotreating and removal of gasoline-weight cyclic components allowed full deoxygenation to be applied at a higher temperature without bio-oil polymerization.

Elliott (2007) showed that full deoxygenation reduces oxygenate content by a large amount in the range of 94.5 to 98.4%. These experiments support the efficacy of the 2nd-stage treatment of bio-oil by partial followed by full deoxygenation in a two-step process in a reactor with two temperature zones. Elliott and Hart (2009) tested lower hydrotreating and higher hydrocracking temperatures for several different bio-oil types in a continuous-flow fixed-bed reactor system. The authors first applied Pd/C catalysts to partially deoxygenate the bio-oil. Elliott and Hart (2012) also applied a bench-scale continuous-flow fixed-bed reactor system for upgrading two different bio-oils produced by fast pyrolysis. The top bed utilized sulfided Ru/C catalysts at a low temperature of about 170 °C, and the bottom bed utilized sulfided CoMo or NiMo/Al2O3 catalysts at a higher temperature of about 400 °C.

Marker and Petri (2009) applied partial and full deoxygenation to produce diesel and naphtha boiling point range fuels from pyrolysis lignin fractioned from biomass. The organic phase was subjected to a 2nd-stage hydrocracking treatment in the temperature range of 340 to 435 °C at a hydrogen pressure of 500 to 1800 psi to produce gasoline and diesel products. McCall and Brandvold (2009) applied a partial deoxygenation followed by full deoxygenation in a two-heating-zone continuous reactor. The oxygen removal rates of the partial and full deoxygenation processes were 89.1 and 96%, respectively, depending on the catalyst type and reaction conditions. Joshi and Lawal (2012) studied the pyrolysis oil on hydrotreating with sulfided NiMo/Al2O3 catalysts in a small diameter microreactor for the 1st-stage hydrodeoxygenation (HDO) to eliminate a percentage of oxygen.

The objective of this research is to upgrade the pretreated bio-oil in a single stage HDO in the presence of three commercial catalysts. This research will benefit the selection and synthesis of more effective catalysts for bio-oil upgrading.

Bio-oil for this study was produced by pyrolysis of pine wood biomass chipped to 1 to 3 mm in diameter at a temperature of 450 °C in the presence of nitrogen. The pyrolyzed gas was condensed and collected as raw bio-oil (RBO). More information about bio-oil production could be found in the previous research work (Luo et al. 2016a,b, 2017). The commercial catalysts HT-2003, HT-951T, and HT-36 were purchased from Liaoning Haitai Sci-Tech Development Co. Ltd. (Liaoning, China). The details of the three catalysts are listed in Table 1.

Single Stage HDO of PTBO in the Parr Reactor

Raw bio-oil was pretreated using the previously described method, and the product was named as pretreated bio-oil (PTBO) (Luo et al. 2016a,b, 2017). The HDO of PTBO with pressurized hydrogen was conducted in a stainless high pressure batch autoclave. The PTBO and catalysts were weighed and then placed in a batch autoclave. The autoclave was closed tightly, and pressurized gas was injected into the reaction system to drive out air and test the sealing of the system. After the system seal was tested, pressurized gas was flushed into the reactor, all the valves was closed, and the water cooling valve was opened. The pressure and the temperature were recorded during the reaction process every 15 min before it reached experimental temperature. When the reaction was complete, the reactor was cooled, and the pressure was released to atmospheric pressure. Both liquid and gas samples were collected. The experimental conditions are listed in Table 2.

After the reaction was complete, the liquid products were collected, weighed, and centrifuged for 4 h at 4000 rpm to separate organic and water phases. The liquid yields were calculated using Eq. 1,

Basic Physical Information of the OLPs

Oxidation of bio-oil improves OLP yield and reduces char production (Steele and Tanneru 2013; Tanneru and Steele 2014). In this research, BO was oxidized to PTBO, followed by single-stage HDO to produce OLPs. The physical and chemical properties of BO and PTBO have been discussed in previous research (Luo et al. 2016a,b). The basic information of the products using three different catalysts was listed in Table 3. For the OLPs yield, the HT 2300 catalyst had the highest yield, followed by HT-36 catalyst, while the HT-951T had the lowest OLPs yield. The yields were 25.3, 27.8, and 13.0 wt%, respectively. For HHV, water content, value and TAN number, HT-36 catalyst showed the best performance of 40.4 MJ/Kg, 1.37 vol.%, and 3.85 mg KOH/g, respectively, followed by HT-951T with 39.8 MJ/Kg, 3.28 vol.%, and 1.10 mg KOH/g. For elemental analysis, all the OLP had higher C and H content and less O content, which indicated that all the three catalysts were effective for HDO. Moreover, OLP obtained from HT-36 catalyst contained the highest C content of 83.3 wt% and H content of 10.5 wt%, but the lowest O content of 6.17 wt%.

Compared with PTBO, all the properties of the OLPs obtained from the single stage HDO process were improved, resulting in lower water content, TAN number, and O content as well as higher HHV value, C, and H contents. Based on the above information, the HT-36 catalyst had the best HDO performance, which was due to conversion of the oxygenates in the PTBO. The difference catalytic performance was due to the composition, structure, and morphology of the catalysts. The HT-36 catalysts with Ni, Mo, P active elements showed much better HDO efficiency compared to other two types of CoMo catalysts, which was consistent with peer’s research work that Ni based catalyst worked well for both 1st-stage and 2nd-stage HDO of bio-oil. Although the yield of OLP is little lower than the reported results of 30 wt%, the TAN, HHV, elemental contents are very close to the reported ones (Tanneru and Steele 2014; Luo 2016). Therefore, Ni based catalyst is very active for upgrading bio-oil to more stable products for further storage, transportation as well as refinery. 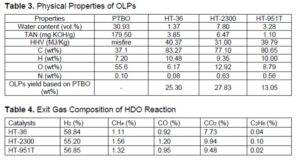 GC Analysis of the Exit Gas

In previous research, deoxygenation was performed with hydrogen and ranged from 1450 to 2900 psi (Wildschut et al. 2009; Venderbosch et al. 2010; Elliott 2012). To reduce more TAN and oxygen content, 1000 psi hydrogen was utilized for hydrotreating of PTBO at 400 °C in this study. Table 4 gives the GC analysis of the exit gas compositions from hydrotreating of PTBO. The exit gas sample was mainly comprised of variable concentrations of H2, CO, and CO2, and a minor amount of CH4. Approximately 40 to 45% of the initial hydrogen was consumed to hydrotreat the PTBO oxygenates, making it reasonable to infer that hydrotreating reaction occurred during upgrading process. This research results were consistent with the reported results that hydrotreating need around 50% hydrogen of the initial input pure hydrogen gas or syngas (Luo 2017).

The GC-MS analysis of OLPs produced by HDO is shown in Fig. 1, and the chemical components are listed in Table 5. The chemical types and their relative peak area percentages changed greatly after the hydrotreatment of PTBO; also, the concentration of the main chemical components varied with the catalyst types. For HT-36, HT-2300, and HT-951T catalyst, OLPs produced 34.8%, 19.1%, and 27.1% hydrocarbon (olefins, alkanes, aromatic), respectively. Other components are comprised of small ratios of oxygenates (such as ketones, alcohols, aldehydes) and large amount of phenols (40.5%, 47.5%, 56.0%). The GC-MS analysis confirmed that HT-36 showed better catalytic performance than the other two catalysts. All three OLPs products were largely phenols, which need further hydrotreating process to convert them to hydrocarbons. The chemical components and their relative concentrations of OLP products were similar to the same bio-oil upgrading although different Ni based catalyst applied (Tanneru and Steele 2014; Luo 2016; Luo 2017). This further showed that HT-36 catalyst was effective for bio-oil upgrading. 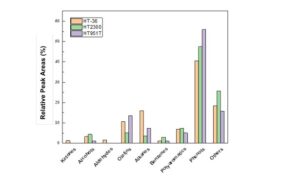 Fig. 1. GC-MS analysis of the OLPs

This research was based upon work funded through the General Program of Civil Aviation Flight University of China (Grant No.: J2020-117) and National Training Programs of Innovation and Entrepreneurship for Undergraduates (Grant No.: S202010624020).