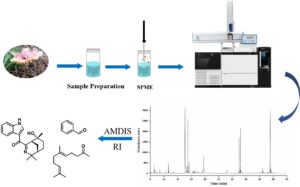 Volatile components in Russula rubra (Krombh.) Bres. were determined with the use of a solid-phase microextraction (SPME)/gas chromatography-mass spectrometry (GC-MS) method. The compounds were identified by the automatic mass spectral deconvolution and identification system (AMDIS) and Kováts retention index (RI). Under the optimized conditions of GC-MS, 52 volatile components were identified in Russula rubra, with the relative percentage accounting for 80.2% of the total ion peak. Notably, aristolone (20.4%), benzaldehyde (20.2%), geranyl acetone (11.0%), and 3-octanone (10.7%) were all at higher levels in samples. The main identified compounds were aldehydes, ketones, alcohols, ethers, and alkanes.

Volatile components in Russula rubra (Krombh.) Bres. were determined with the use of a solid-phase microextraction (SPME)/gas chromatography-mass spectrometry (GC-MS) method. The compounds were identified by the automatic mass spectral deconvolution and identification system (AMDIS) and Kováts retention index (RI). Under the optimized conditions of GC-MS, 52 volatile components were identified in Russula rubra, with the relative percentage accounting for 80.2% of the total ion peak. Notably, aristolone (20.4%), benzaldehyde (20.2%), geranyl acetone (11.0%), and 3-octanone (10.7%) were all at higher levels in samples. The main identified compounds were aldehydes, ketones, alcohols, ethers, and alkanes.

Pinus massoniana Lamb. is widely planted in southern China and occurs from near sea level to 1,300 m in elevation (Fig. 1). This pine tree plays a crucial role in China’s economy, afforestation, and revegetation projects (Wang et al. 2010). The ecological growth environment of P. massoniana is very suitable for the growth of Russula rubra (Krombh.) Bres. (RRKB). RRKB is an ectomycorrhizal fungus symbiotic with forest trees (Zhao and Jiang 2014). It has important economic value because it is edible and is used as medicine. As a wild edible fungus, it is rich in nutrition with a delicious taste and has the effects of nourishing the blood and Yin, cooling and detoxifying, lowering cholesterol, protecting the liver, and acting against cancer (Nandi et al. 2013; Stasinska et al. 2016). It is well known that mushrooms have important nutritional value due to their high protein, essential amino acids, fiber content and low-fat content, and are regarded as delicacies due to their texture and taste. People in Chinese folk believe that regular consumption of RRKB can enhance immunity, so they stew RRKB with meat and use this food to treat human anemia, edema, malnutrition, excessive postpartum hemorrhage, and many other diseases. RRKB not only can be used for dishes, but its essential oil can also be used as seasoning. As the main components of the aroma of RRKB, volatile components are important factors that determine their flavor quality. Among them, the aliphatic eight carbon (C8) components are the main contributors to the unique flavor of RRKB. Studies have been conducted on the volatile aroma components of a variety of edible fungi, such as Lentinus edodes (Tian et al. 2016), Flammulina velutipes (Yang et al. 2015), Agaricus bisporus (Taskin et al. 2013), and Morchella elata (Skin 2013). The research on the volatile components of RRKB has been so lacking that the volatile components of it have not yet been clarified. Volatile component determination has been used for stoichiometric comparisons of strains or species to assess the authenticity of flavoring substances and commercially available food products.

At present, solid-phase microextraction technology is a widely used method for sample preparation. For complex sample processing steps such as extraction, concentration, desorption, and sampling, SPME technology enables these operations to be integrated (Li et al. 2018; Yang et al. 2019). SPME technology has become the preferred technique for sample preparation in food analysis due to its many advantages, such as high sensitivity, simple operation, and low device price (Santos Silva et al. 2019). In this study, solid-phase microextraction-gas chromatography mass spectrometry (SPME-GCMS) technology, which requires only a small number of samples, was able to perform sample pretreatment for headspace adsorption and sample injection for heating and analyzing volatile organic compounds in one step.

The KOVÁTS Retention Index (RI) which was first proposed by Kovats in 1958, represents a behavior of retention value of substances in fixed liquid, and is the most widely used and internationally recognized qualitative index at present (Kováts 1958). The automated mass spectral deconvolution and identification system (AMDIS) can be used to determine the compounds in the samples by comparing with the mass spectral library and extracting the pure mass spectra of each component and relevant information from the mixed material spectral results. In the analysis of natural products, it is very common that the analyte compound encountered is not in the mass spectrum library, and the absence of standards makes it difficult to perform mass spectrometric qualitative analysis. However, it is possible to complete the qualitative analysis of unknown components by using the chromatographic RI, which makes the qualitative and quantitative analysis of complex systems possible in this case. It is difficult to determine the structure of compounds with similar structure and similar retention time by MASS spectrometry when analyzing the sample composition by GC-MS, but the combination of RI and AMDIS method can significantly improve the accuracy of structural determination. The experimental results were accurately characterized by comparing the RI calculated by the actual test with the Kováts RI recorded in the automated mass spectral deconvolution and identification system (AMDIS, U.S. National Institutes of Standards and Technology (NIST)) 2014 edition database.

Compared with the traditional method, this method was more accurate in the characterization of compounds. In the current study, the identification of volatile components in RRKB essential oil not only provides a reference for the study of RRKB oil flavor composition and nutritional value, but it also provides a basis for RRKB oil resource development and quality evaluation.

For extraction, the whole fresh RRKB was taken as a sample and cut into cubes of about 3mm. Then 5 g of an RRKB specimen was placed in an SPME sample bottle. Next, 2 µL of cyclohexanone with a concentration of 1.54 µg/mL was added to the SPME sample bottle, and the bottle was then immediately sealed after being placed in an agitator. The manual injector for a 2 cm-50/30 m DVB/CAR/PDMS StableFlex fiber head was mounted on the sample bottle. Samples were magnetically stirred during extraction at 60 °C for 55 min. Finally, the fiber head, which was removed and placed into the gas chromatograph inlet, underwent thermal analysis.

The compounds were identified by searching and verifying the NIST17 and Wiley275 standard mass spectra and mass spectrometry computer data system for each peak in the total ion flow chart. The relative mass fraction of the chemical composition was determined by the peak area normalization method.

After injection using SPME technology, the sample was separated into compounds by a gas chromatographic column. The molecular fragment data were recorded by the mass spectrometry software. The total ion chromatogram of the experimental results is shown in Fig. 3.

The corresponding MS spectra were obtained by MS scanning of the peaks in the total ion flow diagram. The NIST 14 and Wiley275 standard mass spectrometer data system in the Chem Station were used to retrieve the relevant mass spectrometer information combined with MS Search V. 2.2 software.

NIST 14 contained MS Search V. 2.2, AMDIS Version 2.72, MS Interpreter, and MS Search software, which could be integrated into Chem Station or run independently. AMDIS could extract a single mass spectrogram and associated chromatographic information for each component from the data obtained by GC/MS or liquid chromatography/mass spectrometry (LC/MS) analysis of the mixture. This information was used to determine whether the component could be identified as a compound in the reference database.

It was difficult to determine compounds only by mass spectrometry fragment ion and abundance ratio. Compounds with similar initial structures, such as isomers and homologues, were prone to misjudgment according to their matching degree. In order to more accurately identify the target compound and obtain more reliable results, a combination of three methods was used for the qualitative analysis that included mass spectrometry database, AMDIS, and RI. Combining chromatographic analysis with mass spectrometry could improve the accuracy of the determination of volatile components in RRKB. First, the combination improved the ability to resolve overlapping peaks in the GC-MS results by using AMDIS to deconvolve the GC-MS results to remove background noise and eliminate the overlapping components of the results. Then, the chemical composition of the volatile oil could be determined more accurately by comparing the different RI with the mass spectrum library.

Under the same experimental conditions, the MS data for the n-alkane mixture standard of C8-C20 were analyzed to calculate the RI (Fig. 4). The RI for each component was calculated by using the linear heating formula, which was calculated as follows (Van den Dool and Kratz 1963),

The amount of each compound was calculated by the ratio of the peak area of the internal standard compound to the sealing area of each compound. They are arranged in the order of retention of the peak of the compound, and the compound information and percentage are shown in Table 1. In this study, 52 volatile components were identified from RRKB essential oil, including aldehydes, alcohols, ketones, ethers, and other compounds. The relative percentage of volatile components accounted for 85.4% of the total ion peak. The proportions of each component are shown in Fig. 5.

Volatile components with a relative content of greater than 10.0% in RRKB were benzaldehyde (20.3%), aristolone (20.4%), 3-octanone (10.7%), and geranyl acetone (11.0%). C8 as the substantial base of mushroom volatile components contained up to 21.1% in Russula. It was worth noting that RRKB contained 1-octanol, 3-octanol, 3-octanone, 1-octen-3-ol, 2-octen-1-ol, 1-octen-3-one and other characteristic compounds with mushroom flavor. Among them, the relative content of 3-octanone was the highest 10.7%, which was the main volatile component that affects the flavor of RRKB. The reason for the sweet taste and tender texture of RRKB may be related to the content of benzaldehyde and geranyl acetone as high as 20.3% and 11.0%, respectively. Other studies had found that benzaldehyde was the main ingredient that causes the stronger caramel-like flavor in mushrooms (Liu et al. 2003) and its content was related to the texture of mushrooms which had a significant impact on it (Nosaka and Miyazawa 2014). Geranyl acetone were significantly and positively correlated to mushroom-like flavor (Chen et al. 2018). The content of copper aristolochia that had obvious antioxidant and cancer-killing activities (Priya and Padmakumari 2012; Memariani et al. 2016; Anjum et al. 2019) in the volatile components of RRKB, was as high as 20.4%, which provides certain theoretical support for it as a natural product for medicine and food.

This study was financially supported by the National Key Research and Development Program of China (No.2017YFD0600302), the National Natural Science Foundation of China (No. 31660200), the Science and Technology Planning Project of Guizhou Province (QKHPTRC [2018]5261).

Priya, M., and Padmakumari, K. P. (2012). “HPTLC and reverse phase HPLC methods for the simultaneous quantification and in vitro screening of antioxidant potential of isolated sesquiterpenoids from the rhizomes of Cyperus rotundus,” Journal of Chromatography B 904(1), 22-28. DOI: 10.1016/j.jchromb. 2012.05.042