As one of the most versatile organic acids, lactic acid (LA) has applications in food, leather, and chemical industries (John et al. 2007). Lactic acid can be converted into various chemicals via chemical and biotechnological routes that modify its carboxylic and hydroxyl groups (Gao et al. 2011). The most important application of lactic acid is perhaps its use as a precursor for the production of poly-lactic acid, a biodegradable and biocompatible polymer (Wee et al. 2006). Lactic acid can be produced either by chemical synthesis or microbial fermentation and about 90% of total worldwide LA is fermented from starch materials.

As a result of furfural production by hydrolyzing hemicelluloses of corncob, huge amounts of furfural residues (FR) are generated annually in China (Sun et al. 2011; Tang et al. 2011b). A potential use could be as raw materials for LA production because FR are rich in cellulose that can be easily hydrolyzed by cellulase (Tang et al. 2011a). Lignin is the second most abundant component of lignocellulosic materials, especially in FR. The accumulation of lignin in a biorefinery process makes it difficult to operate a fermentation process with a high substrate concentration, which will limit the final LA concentration. Technologies have been developed to increase the final LA concentration to decrease the process cost of downstream process.

This paper deals with the fermentative production of L(+)-lactic acid from delignified FR as main carbon source. The alkaline hydrogen peroxide method was employed in this study to remove the lignin in FR, and the effect of delignification on lactic acid production was evaluated. Using corn hydrolysates/furfural residues as substrates, SSF with different media were carried out to investigate the effect of lignin on the interaction between enzymes and lactic acid bacteria.

To study the effect of lignin on interaction between enzymes and lactic acid bacteria, materials without lignin should be used as substrates in SSF to investigate the interaction of enzymes and lactic acid bacteria. It is hard to obtain lignin-free FR by alkaline peroxide. Corn and glucose are the potential materials because they are free of lignin. Corn saccharification liquid was therefore used as material for comparison.

Furfural residue (FR) was kindly provided by Chunlei Company (Xingtai, China), and had been water-rinsed before being used. The average contents of glucan, lignin, and ash were 48.17%, 43.29%, and 6.42%, respectively. Corn kernels with a starch content of 75.2% and a nonstarch polysaccharides content of 11.9% were purchased from Zhongliang Company (Beijing, China).

The alkaline hydrogen peroxide method was employed to remove the lignin in FR, as had been described in a previous study (Su et al. 2012). The hydrogen peroxide had been added to the pressure bottles with FR slurry in water (3.33%, w/v), followed by pH adjustment to 11.5 with 6 M sodium hydroxide. The pretreatments were performed in a water bath at 80 °C for 1 h. The solid residues were subsequently water-rinsed until neutral (water amount of 20 ml/ g raw FR) and stored in sealed bags at 4 °C before being used.

A series of samples with progressive lower lignin contents were obtained as the amount of H2O2 increased. Samples treated by 1.3, 1.5, and 1.7% H2O2 (w/v) were labeled as R1, R2, and R3, respectively. The raw material FR, without delignification, was labeled as R0.

The lignin and glucan contents of FR as well as delignified samples were analyzed according to the National Renewable Energy Laboratory (NREL) methods (Sluiter et al. 2004a). The total starch was determined when the saccharification of corn starch was finished (McCleary et al. 1994). The samples after LA fermentation were filtered (0.22-μm pores) to detect UV absorbance at 250 nm, lactic acid, filter paper activity, and enzymatic protein concentration. Samples were diluted by 32 times with water points to determine their absorbance at 250 nm by a spectrophotomer (UNICO Instruments Co., Ltd, Shanghai, China). A250 was detected to reflect the relative content of phenolic compounds (Bustos et al. 2004). The liquid fraction of the supernatant after fermentation were analysed according to an NREL procedure (Sluiter et al. 2004b).  Lactic acid was analyzed by HPLC (Waters 2695e, USA) using an Aminex HPX-87H (300×7.8mm: Bio-Rad, USA) at 65°C and refractive index detection detector at 30°C. The injection volume of the sample was 10 µL, and 5 mM sulfuric acid was used as the eluent, at a flow rate of 0.6 mL/min. Filter paper activity was determined by the method described by Mandels et al. (1976). Enzymatic protein concentration was determined by the Bradford method using bovine serum album as a standard (Bradford 1976). Assuming that 1 g cellulose or starch present in the liquid theoretically gave 1.11 g of lactic acid, lactic acid yield was expressed as percentage of the theoretical yield based on FR cellulose or corn starch. Assays were performed in three repeated experiments, and the mean values are presented.

Fig. 1. The lactic acid profiles in SSF of delignified FR

Lignin removal improved lactic acid production. However, great differences were observed among these cases. An increase in delignification decreased the fermentation rate. The fermentation rate in SSF of R1 was obviously faster than the other ones. Though R3 had the lowest lignin and the highest cellulose, the fermentation rate of SSF of R3 was almost the same as that of R0. According to our previous study, two kinds of delignifi-cation methods, alkaline peroxide and sodium chlorite methods, had been investigated to improve enzymatic hydrolysis of different lignocellulosic materials (Su et al. 2011, 2012). Alkaline peroxide provides effective delignification of fibrous cellulose. The hydroperox-ide anion (HOO-) and the hydroxyl radical (HO•) are generally considered as the lignin-oxidizing inducer in the alkaline peroxide process (Su et al. 2012). Compared with alkaline peroxide, the sodium chlorite method obviously decreased the glucose yield in enzymatic hydrolysis as the delignification degree increased. Su et al. stated that compared with delignified sample with a lignin content of 10.2%, delignified sample with a lignin content of 5.4% had a slightly higher conversion rate during the first 24 h, and almost the same conversion rate after 24 h.

Figure 3 shows the effect of delignification degree on initial UV absorbance, the final LA concentration, and the final yield. The final concentration of lactic acid initially increased with the decrease of lignin content, and then leveled off, or more precisely, exhibited a reduction after the highest point. The yield decreased with the reduction of lignin content. The degradation product of lignin produced during lignin removal was supposed to be one of the reasons for the negative effect of delignification on LA production. Rinsing with water has been proven to be an effective detoxifying method, which could reduce water-soluble inhibitors. However, the lignin degradation products linked to or wrapped by the FR structure backbone would be released by the rupture of the structure as the enzymatic hydrolysis proceeded. According to our previous study, the most pronounced effect of furfural and phenolic compounds was a prolonged lag phase, and there were no obvious differences in the maximum yield of lactic acid when phenolic compounds were added (Feng et al. 2012), which means that phenolic compounds are not the only reason for the low LA yield in SSF of R2 and R3 in this work. However, a moderate delignification was optimum for the purpose of lactic acid production. 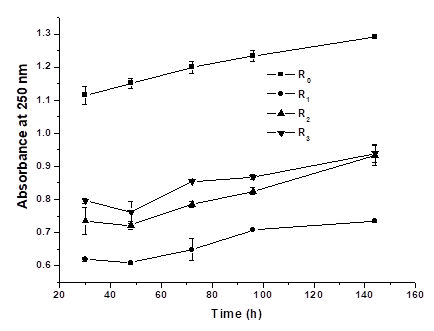 Fig. 2. The UV absorbance profiles in SSF of delignified FR

Effect of Lignin on Interaction Between Enzymes and Lactic Acid Bacteria

Using corn hydrolysates/furfural residue as substrates, SSF with different media were carried out to investigate the interaction between enzymes and lactic acid bacteria. SSF of 2.5% corn hydrolysates with mineral salt medium obtained 19.0% yield at 68 h, while that with full medium obtained 87.5% yield (Fig. 4). Cellulase (the amount is same as that used in SSF of 5% FR) was added to SSF of 2.5% corn hydrolysates to investigate the effect of enzymes on lactic acid bacteria. Cellulase increased the yield of SSF to 68.7%. Cellulase enabled the conversion of non-starch polysaccharides in corn hydroly-sates into glucose. However, the amount of non-starch glucan in corn kernels was found to be only 11.9%. 68.7% of the yield indicated that cellulase has the same positive effects as nitrogen sources. The small amount of cellulase added in SSF could not support LA fermentation. The level of release of nutrients in corn is dependent on saccharification time (Akerberg and Zacchi 2000). It is supposed that cellulase also has a positive effect on the release of nutrients in CR.

Fig. 4. The yield profiles in SSF of corn hydrolyzates with different media

To evaluate the influence of lactic acid bacteria on enzymes, the amount of remaining cellulase activity (filter paper activity unit, FPU) (Fig. 5) and the enzyme-based protein concentration (Fig. 6) in the liquid fraction were determined for selected samples during SSFs. FPU was measured at 42 h, 92 h, and 144 h in chosen SSFs (SSF of 5% FR with mineral salt medium, SSF of 5% FR with full medium, and SSF of 2.5% CR with cellulase). The enzyme-based protein concentration was measured at 92 and 144 h. The FPU decreased after 92 h in all SSFs (Fig. 5). FPU in SSF of 5% FR with mineral salt medium was lower than that with full medium. In all measured samples, FPU in the SSF with 2.5% CR with cellulase was the lowest. The enzyme-based protein concentration in the SSF with 2.5% CR was the lowest.

Fig. 5. The enzyme activity in the liquid fraction during chosen SSFs

Fig. 6. The enzymatic protein concentration in the liquid fraction during chosen SSFs

Enzymes constitute a significant contribution to the overall cost in bioconversion processes based on enzymatic hydrolysis of cellulose (Wingren et al. 2003). Delignifi-cation of lignocellulosic materials could provide a potential step for decreasing the enzyme loading and overcoming the disadvantage of low final product concentration in SSF. The efficiency of enzymatic hydrolysis may be decreased when the sodium chlorite method is used for delignification and the removal of lignin exceeds 50%, which also results in a reduction of yield in SSF for LA production. Lactic acid bacteria impacted the enzyme activity by decreasing protein concentration, and nutrient limitation led to more reduction, according to this study. Lignin would slow down the reduction of enzyme activity. Though the efficiency of enzymatic hydrolysis is not decreased, as high delig-nification is obtained by the alkaline hydrogen peroxide method, a higher delignification leads to a slower fermentation rate and a lower final LA concentration. The results indicated that inhibitors and the effect of lignin on the interaction between enzymes and fermentation strains should be considered when delignification is used to improve the final product concentration in SSF. However, more work is still needed for further study of the interaction between enzymes and fermentation strains by excluding the inhibiting factors. High delignification also means undesirable degradation of cellulose and high process cost. Therefore, moderate delignification would also be cost-effective for using FR to produce lactic acid.

The authors are grateful for the financial support of this research from the Fundamental Research Funds for the Central Universities (BLYJ201212), National Science Foundation of China (31070510), and Major State Basic Research Projects of China (973-2010CB732204).

Akerberg, C., and Zacchi, G. (2000). “An economic evaluation of the fermentative