The use of gluconic acid as an additive in magnetic paper 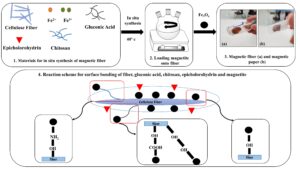 The Use of Gluconic Acid as an Additive in Magnetic Paper

One of the most important challenges in the papermaking process is the decline in the physical properties of paper when using filler particles, as the particles deposit on the surface of the fibers and reduce hydrogen bonding between fibers (Mo et al. 2017). As such, a paper strength additive should be attached to the fibers and bonded between the fibers (Mohamed et al. 2010).

Many studies have been conducted on applying additives to improve the strength of paper. In magnetic papermaking, the nanomagnetite (NM) fillers deposit on the fibers and reduce the strength of the paper (Mohamed et al. 2010). Researchers have studied the use of organic and environmentally friendly materials such as cationic starch as the paper strength additives (Mohamed et al. 2010). However, previous research in magnetic paper production has neglected to consider producing papers with higher strengths. The filler retention improvement approach is the primary reported focus to prepare magnetic papers. Moreover, using other natural and cellulosic derivatives to obtain this aim is important. One of the cellulose derivatives that has remained understudied in papermaking is gluconic acid (GA).

Gluconic acid (C6H12O7) is a mild organic, noncorrosive, nonvolatile, nontoxic, water soluble, and biodegradable derived acid from glucose obtained through a simple oxidation reaction (Ramachandran et al. 2006; Anastassiadis and Morgunov 2007). Gluconic acid has many applications in various industries (Godjevargova et al. 2004). It is important for chemical and pharmaceutical applications, as well as hygienic products, food, beverage, textile, and other industries (Kim and Kim 1991; Anastassiadis et al. 2003; Ramachandran et al. 2006; Anastassiadis and Morgunov 2007; Singh and Kumar 2007). There are different methods for producing GA, e.g., microbial fermentation and enzymatic, chemical, electrochemical, biochemical, and bio-electrochemical processes (Sankpal and Kulkarni 2002; Ramachandran et al. 2006). Due to the organic structure of GA and its similarity to glucose in the cellulose chain, as well as the carboxyl and hydroxyl groups in its structure, it can be a good candidate to be used as a paper strength additive.

The purpose of this paper is to investigate and introduce a GA additive into papermaking and determine its efficiency in increasing the strength of nanomagnetic papers (NMPs) produced with kraft fibers (KF) and nanomagnetite (NM) via in-situ synthesis. Chitosan and epichlorohydrin were also added as cross-linking additives in the synthesis phase of the magnetic fibers, to cause homogeneous dispersion of the NM onto the surface of the fibers and iron salts, as well as during the process. The morphology of the fibers, paper strength, optical properties, and saturation magnetization of the paper were studied before and after the magnetization process.

Preparation of the cellulose fibers

The KF sheets were soaked in water for 24 h, and then the pulp fibers were obtained using a laboratory pulp disintegrator to a freeness of 300 CSF ± 20 CSF.

Production of the nanomagnetic fibers

Production of the magnetic hand-sheet

X-ray diffraction (XRD) analysis was performed on all samples using a X’ Pert MPD, Philips diffractometer. The samples were scanned with Cu Kα = 1.5406 Ǻ radiation at a diffraction angle (2θ) ranging from 5° to 80° and a step size of 1°/min. Atomic force microscopy (AFM) was used to determine the size of the NM particles. The AFM was performed with an Easyscan2 Flex AFM probe microscope in air. The samples were prepared by dispersing 1 mg of NM in distilled water via an ultrasonic bath for 10 min. A droplet of the NM solution was cast onto a microscope slide. The morphology of the NM particles and fibers, as well as the fibers after magnetic treatment, were examined via scanning electron microscopy (SEM). The SEM micrographs of the samples were taken using a SEC-SNE-4500 scanning electron microscope. The samples were covered with a thin layer of gold via sputtering. The magnetization of the samples was measured via vibrating sample magnetometry (VSM) using a Meghnatic Daghigh Kavir company device in an applied magnetic field sweeping between ± 10000 Oe.

The tensile, burst, and tear strengths of the nano magnetic papers samples were tested using a tensile test, burst test, and tearing test machine at room temperature. Initially, the paper samples with 0%, 1%, 2%, or 3% GA were produced in order to verify the ability of GA to improve the strength of papers. Figure 3 shows the diagrams of the tensile, burst, and tear index of the control sample and nano magnetic papers treated with 0%, 1%, 2%, or 3% GA. Chitosan and epichlorohydrin were used to produce the samples. Epichlorohydrin increases fibers bonds with covalent bonds as well as increases fiber flocculation. Increasing the flocculation causes improvements in paper formation and as a result, the paper strength improves. In addition, chitosan increases the fiber bonding, and the paper strength increases, subsequently. Cellulose fibers become anionic after being immersed in water (Burkinshaw 2016). The electrostatic force attracts anionic fibers and cationic iron salts together in the aqueous solution. After the formation of the nanomagnetite, these particles form hydrogen bonds with cellulose through their surface hydroxyl groups. They also react with the chitosan amine groups and fill the reactive sites of the fibers and the chitosan. As a result, the amount of bonding is reduced, thereby reducing the strength of the paper. The nanomagnetite acts as a filler between the fibers and prevents bonding between the fibers, which as a result reduces the strength (Zakaria et al. 2004). The strength increased for the nano magnetic papers with addition of GA in the production process of the magnetic fibers.

The tensile and burst strength are influenced by several factors, e.g., the bonding between the fibers, bonding strength, number of bonds, paper sheet formation, and fiber bonded surface (Maurer and Kearney 1998; Zakaria et al. 2005). The bond type between the fibers in the paper was hydrogen bonding. Due to the hydroxyl and carboxyl functional groups of the GA, the bond between the fibers was increased by creating connections of the type fiber to fiber and fiber to GA. Zakaria et al. (2005) and Chia et al. (2008) also confirmed the impact of the presence of the reactive hydroxyl and carboxyl groups on increasing the inter-fiber bonds. Chitosan, as a polymer, is similar to cellulose, and increases the strength of non-magnetite paper. The tear strength is mostly influenced by the strength of each fiber, the length of the fibers in comparison to bonding between fibers, and the ratio between the long fibers to short fibers in the paper, thus, increasing the amount of GA resulted in an increase in small particles in comparison to long fibers in the paper; as a result, the paper tear strength decreased (Khalilian et al. 2018).

Optical Properties of the Papers

Nanomagnetite particles can reduce the brightness of the papers due to the black color. The brightness increased as the percentage of GA increased, i.e., from 0% to 3%. In addition, the change in color of the paper made with nano magnetic papers confirmed the increasing brightness. The color of the nano magnetic papers became darker upon the reduction of the GA content. The opacity diagram indicated that the NMP without GA has the highest opacity. Fillers improve the optical properties of paper by moving forward the light scattering capacity through expanding the specific surface area (Farnood 2009). In addition, the opacity of the nano magnetic papers samples decreased as the GA content decreased in the samples, which indicated that the amount of filler had decreased. The light scattering ability of the papers can be attributed to the bonding between the fibers (Hubbe 2006). The opacity was decreased due to increasing bonding between fibers. As a result, the magnetic paper with higher tensile strength illustrated lower opacity.

Figure 5 depicts the X-ray diffraction patterns of the nanomagnetite, cellulose fibers, and nano magnetic papers. The XRD for the nanomagnetite had six primary diffraction peaks at 26.30°, 35.6°, 41.26°, 53.7°, 62.18°, and 74.46°, which refers to the Fe3O4 nanoparticles (Long et al. 2009; Small and Johnston 2009). The pattern exhibited a sharp peak at 35°, and this peak decreased after the in-situ synthesis of the nanomagnetite and fibers. The diffraction pattern of the cellulose fibers showed two intense diffraction peaks at approximately 2θ = 16° and 22.61°, which were assigned to the cellulose type – I (Mashkour et al. 2011; Wu et al. 2011; Cao et al. 2015). The primary peak of cellulose increased as the GA content increased in the samples. Diffraction peaks for the nano magnetic paper with GA treatment samples were found at 17°, 22°, 35°, and 41°, which were associated with both cellulose and Fe3O4, and were observed in all samples treated with nanomagnetite. As shown in the XRD patterns, the primary peaks of NM decreased as the GA content increased. Iron oxide has different structures, e.g., magnetite (Fe3O4), maghemite (α-Fe2O3), hematite (ɣ-Fe2O3), and ferric hydroxide (β-FeOOH) (Zboril et al. 2002). The diffraction peaks observed in the XRD indicated that the produced iron oxide was magnetite.

The magnetic behavior of the nanomagnetite and nano magnetic papers was examined via vibrating sample magnetometry (VSM), at room temperature. Figure 6 indicated that the nano magnetic paper samples exhibited superparamagnetic behavior, as conﬁrmed by the absence of coercivity (Hc), remanence (Mr), and ferromagnetic behavior (Mashkour et al. 2011; Biliuta and Coseri 2016). The saturation of the magnetization value for the nano magnetic papers with a 0%, 1%, 2%, or 3% GA treatment was 7.54, 5.64, 4.81, and 0.55 emu/g, respectively. As a result, the magnetic particles loaded into the cellulose fibers diminished as the GA value was increased. The GA reactivity was high due to its hydroxyl and carboxyl functional groups in its structure. The addition of GA in the in-situ synthesis process of the magnetic fibers acted as a competitor to the nanomagnetite and caused a reaction between the GA and hydroxyl groups of cellulose and the chitosan amine groups, thus filling their reactive sites. This prevented the nanomagnetite from reacting with them, causing the magnetite particles to be suspended in the system, and then removed during the papermaking process. Furthermore, the GA reacts with the nanomagnetite and bonds through hydroxyl groups. However, the GA is a small monomer and may be removed from the fiber suspension when making paper. As a result, the magnetic saturation in the final paper was reduced. Hence, the magnetic saturation in the nano magnetic papers decreased as the GA increased.

The authors are grateful to the Sari Agricultural Science and Natural Resources University for providing equipment support.

Santos, A., Anjos, O., and SimÕes, R. (2008b). “Influence of kraft cooking conditions on the pulp quality of Eucalyptus globulus,” The Australasian Pulp and Paper Technical Association Journal 61(2), 148-155.