Because of the growing consciousness of sustainable development, bio-based materials are becoming increasingly popular in building industries around the world. Biomaterials such as wood and bamboo play a major role in sequestering carbon, and they require less energy than most other building materials in the life cycle of a building (Amada et al. 1997; Kuehl et al. 2013). Bamboo can be harvested in 3 to 5 years, which is much shorter than trees, yet its strength-to-weight ratio is similar to or greater than wood (Nogata and Takahashi 1995; Albermani et al. 2007). As bamboo is extensively grown in sub-tropical and tropical areas with rapidly developing economies, it is one of the most promising alternative building materials to concrete and steel.

Plants such as bamboo and trees are not designed for use as building materials. The tubular stem of bamboo is meant to support its own weight and heavy loads on the branches created by snow, wind, etc. Raw bamboo is not a standardized product due to variability in its size and mechanical properties, along with other defects. There have been efforts to turn bamboo into construction materials suitable for the modern building industry (Xiao et al. 2013; Correal et al. 2014; Li et al. 2015).

Bamboo scrimber, a compressed or laminated product manufactured with bamboo and thermosetting resin, is an innovative bamboo-based product that is very popular in China. The latest manufacturing technology, improved by Yu and Yu (2013), is shown in Fig. 1. First, the bamboo culm is split into halves, and the inner nodes are removed. The semicircular culms are crushed and flattened into oriented bamboo fiber mats (OBFM) with a netlike structure. After oven-drying, these mats are immersed into resin and dried to a specific moisture content. The OBFM are stacked into a cuboid mold layer-by-layer and hot-pressed into the bamboo scrimber. Bamboo scrimber has great potential as an engineering and building material due to its high manufacturing efficiency, material utilization rate, and good mechanical properties (Yu et al. 2014). For engineering applications, the mechanical properties and design strength of bamboo scrimber have been investigated (Yu et al. 2006; Zhu et al. 2011; Zhong et al. 2014).

Micro-cracks are inevitably introduced into the bamboo scrimber members and may affect the structural performance. The bamboo culms are passed through a fluffing machine, and many linear cracks form in the culms. Cracks may also appear at the bonding interface between two layers of bamboo mats because the waxy layer in the outer skin of bamboo damages the glue line. These micro-cracks were extensively distributed in bamboo scrimber, and may induce the failure of the bamboo scrimber under enteral force or action (Liu 2016). Fracture due to the micro-cracks were observed not only in bamboo scrimber (Sharma et al. 2015), but also in other engineered bamboo products like bamboo bundle laminated veneer lumber (Chen et al. 2014).

The authors developed one type of reinforced bamboo scrimber composite (RBSC) beam and investigated its bending properties by experiment. When the beam was loaded to failure, cracking across the neutral plane of the beam occurred in some specimens, and the bearing capacity of these beams was much lower than those of beams that failed due to tension of the bamboo fiber (Zhong et al. 2017). Thus, the fracture mechanics may be used to predict the failure load of the bamboo scrimber members.

Fracture toughness is the ability of a material containing cracks to resist fracture. There are three ways of applying a force that enable the crack to propagate: mode I, the opening crack; mode II, the sliding crack; and mode III, the tearing crack. For biomaterials such as wood and bamboo, the tension strength in its perpendicular-to-grain direction is significantly lower than that in its parallel-to-grain direction, so the opening mode is usually the most critical. The fracture properties of raw bamboo of some species have been investigated (Shao et al. 2009; Wang et al. 2014; Xu et al. 2014), and the fracture characteristics of a kind of bamboo fiber-based polyester were investigated by Wong et al. (2010), while the authors have investigated the mode II fracture toughness (Wu et al. 2018). However, the mode I fracture toughness of bamboo scrimber has not yet been reported.

The objectives of this study were to determine the feasibility of using compact tension specimens to measure the mode I fracture toughness of bamboo scrimber, to evaluate the effects of thickness and grain orientation on the fracture toughness, and to verify whether the fracture mechanics can be used to describe the cracking behavior of bamboo scrimber by the extended finite element method (XFEM).

Figure 2 shows the dimensions of the compact tension specimen. The outline of the specimen was 62.5 mm × 60 mm. One 34.5-mm-long gap was cut along the longitudinal direction, with a slit of approximately 3 mm inserted at the end of the gap using a 0.28-mm-thick razor blade. One hole was drilled in each fork. Specimens with thicknesses of 10 mm, 20mm, and 30 mm were designed to investigate the effect of the thickness on the fracture toughness. Two types of specimens with different grain modes were cut from the bamboo scrimber beam, i.e., the T-L and R-L specimens, named using a two-letter code. The first letter designates the direction normal to the crack plane, while the second letter denotes the expected direction of crack propagation. The letter “L” represents the longitudinal direction. Because the culm was flattened, and the bamboo mats were stacked layer-by-layer, “R” represents the stack direction, and “T” represents the flattened tangential direction. As shown in Fig. 3, the grain directions can be clearly observed on the end surface of the specimen. There were 9 replicates for each thickness and grain mode, and a total of 54 specimens were manufactured.

Fig. 2. Dimensions (in mm) of the compact tension specimen

Fig.3. Photo of a specimen and the grain directions

As shown in Fig. 4, the load was applied to the specimen via the U-shaped clamps. A double-cantilever clip-in displacement gauge was mounted to the crack to trace the opening of the crack. A crosshead speed of 0.5 mm/min was chosen according to the work of Liu (2009). The tests were performed at room temperature (approximately 20 °C).

The cracking behavior can be studied using XFEM, which allows the presence of discontinuities in an element by enriching degrees of freedom with special displacement functions. In this study, four-node plane strain elements (CPE4R) were used to model the specimen in Abaqus 6.14 (Dassault Systèmes Simulia Corp., Providence, RI, USA). A 3-mm initial crack was inserted into the same position with the specimen, and the whole specimen was assigned as the crack propagation region. The mesh in the anticipated crack propagation region was refined. A reference point at the center of each hole was coupled to the nodes around the hole, and then the translational movements of one reference point were restrained, while a vertical movement was assigned to the other reference point. The maximum-principal-stress criterion used to model the crack initiation can be expressed by Eq. 1,

As shown in Fig. 6, failure occurred at the crack tip instantaneously, and the crack propagated unstably. In some specimens, fiber bridging was observed, as shown in Fig. 6(b). This was similar to wood (Wu et al. 2012); however, it was very easy to separate the two parts artificially.

The failure surface of the specimens in the T-L group was generally coarser than that of the specimens in the R-L group, as illustrated in Fig. 7. This result might be because the crack can propagate in a zigzag fashion due to micro-cracks at the bonding interface which was perpendicular to the initial cracking surface in the T-L group, while the crack usually propagated within the same layer of OBFM in the R-L group.

Figure 8 shows a typical load-crack opening displacement curve of the specimen. The relationship between load and displacement was generally linear before the peak load, after which the load decreased sharply. Therefore, the peak load of each specimen was taken as the critical load that initiated the crack.

The compact tension specimen’s critical stress intensity factor (KIC) can be obtained by the equation recommended by ASTM E399-17 (2017) as,

where FQ is the critical load, B is the thickness of the specimen, W is the height of the specimen, a is the length of the initial crack, and f(a/W) is a geometry factor, which for the compact tension specimen can be expressed as:

Schachner et al. (2000) verified that Eq. 2 could be used to calculate the stress intensity factor of parallel-to-the-grain mode I cracking in wood via the finite element method. In this study, the same equation was adopted for bamboo scrimber. The fracture toughness (KIC) for each specimen is listed in Table 1. The average, standard deviation, and coefficient of variation for each group and each grain direction are also presented.

Table 1. KIC of the Bamboo Scrimber

One-way analysis of variance (ANOVA) was conducted for each test group and between the two grain modes. Within the same grain mode, there were no significant differences among the thicknesses (p=0.66 and p=0.67 for different thicknesses in T-L grain mode and R-L grain mode, respectively); however, there was a significant difference between the two grain modes(p=0.0007). Therefore, 10 mm was thick enough for the stress to be distributed uniformly throughout the thickness of the specimen.

Table 1 shows that the average KIC values of bamboo scrimber for the T-L and R-L grain modes were 54.3 MPa·mm1/2 and 47.9 MPa·m1/2, respectively. Thus, the fracture toughness of the T-L grain mode was 13.4% greater than in the R-L grain mode. One possible reason for this phenomenon was that the bonding strength at the interface was weakened by the waxy coat in the outer layer of the bamboo. Furthermore, the fracture toughness of the T-L group was more uniform than in the R-L group. The results were similar to the results for fiber-reinforced polyester composites, which was around 50 MPa·mm1/2 (Wong et al. 2010).

The simulation problem was solved using the Abaqus Standard solver. Figure 9 shows the crack and the perpendicular stress contour of the specimen. Because it was a 2-dimensional model, there was no thickness information in the model. Therefore, the unit thickness was used to calculate the fracture toughness. 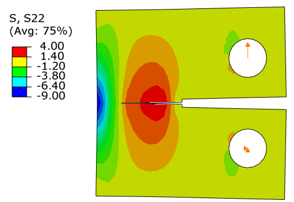 Fig. 9. Stress contour of the specimen

The authors are grateful for the financial support from the National Key R&D Program of China (Grant No. 2017YFC0703501) and the Fundamental Research Funds of Research Institute of Forestry New Technology, Chinese Academy of Forestry (Grant No. CAFYBB2017SY036).