Due to its enormous economic value and wide range of uses, P. bournei has suffered severe damage (Liu et al. 2014a). Currently, it is only sporadically distributed in mountainous, evergreen broad-leaved forests 200 to 1000 meters above sea level in Zhejiang, Fujian, Guangxi, and Guizhou provinces of China (Zhang and Iwatsuki 2013). Plant essential oil is a secondary metabolite of plants and is widely used in pest control, cosmetics, food, medicine and other fields (Bedini et al. 2016; Perdones et al. 2016; Salahfatnassi et al. 2016). Studies have shown that Phoebe zhennan plays an important role in the development of natural aromatic resources. Phoebe zhennan seed oil can be used as raw material for cosmetics production (Ren et al. 1990) and its wood essential oil has certain bactericidal and antitumor activity. According to the ancient Chinese medical book “Compendium of Materia Medica” “Taiping Shenghui Fang”, Nanmu is used as a medicine, which can treat stomach diseases, cholera, tendons, otitis media (otitis), athlete’s foot and other diseases. At present, studies on P. bournei are limited to biological characteristics (Zhou et al. 2005; Zhang et al. 2012), wood properties (Jiang et al. 2008), nursery techniques (Huang et al. 2016; Zhang et al. 2016a, b), and artificial forest management (Shao et al. 2014; Huang et al. 2017; Yu and Chen 2017). Research on the chemical constituents and biological activity of the essential oil and other aspects had not been carried out yet.

The wood structures of Phoebe Ness and its closely related species are very similar. It is difficult to identify the species accurately by traditional methods. However, there is a high demand for the identification of the species of the jinsinan wood in the timber market (Yang et al. 2018). Also there is a need for reliable forensic identification of the species. Studies have shown that there are differences in the chemical composition of the P. bournei wood and other species in the same genus (Ding et al. 2017b; Wang et al. 2017; Xue and Zhao 2017). This study tested and analyzed the chemical composition of P. bournei essential oil, in order to provide a reference for the identification of P. bournei, regulate the trade of jinsinan wood, and promote the prosperity and development of the market.

The experimental raw material P. bournei was provided by Yiming Wood, Rongshui County, Guangxi Province. The age of the tree was 1700 years. Wood samples were collected at 1.3 m above the ground. The moisture content of the wood was 16.8%.

The essential oil was extracted from the wood of P. bournei by a hydrothermal method. First, a crushed sample of P. bournei weighing 200 ± 0.01 g was accurately measured using an analytical balance and added to a 2000 mL round-bottomed flask. Next, distilled water (1200 mL) was introduced, and several glass beads were added to prevent bumping. The extraction apparatus was assembled and heated for 5 h (until the volume of the essential oil remained constant). After settling for 0.5 h, the volume of the extract was recorded, with three replications.

An Agilent HP-5 chromatography column (30 m × 0.25 mm × 0.50 μm) was used. The sample injection volume was 1 μL, the split ratio was 50:1, the detector temperature was 250 °C, and the carrier gas used was ultra-pure helium. The oven temperature program was as follows: 120 °C for 3 min, increased to 140 °C at 5 °C/min over 5 min, then increased to 160 °C at 2 °C/min over 10 min. The flow rate was 1 mL/min, and the machine was equipped with a flame ionization detector. The components in the essential oil were identified by retention indices that were determined with C7–C20 alkane standards as the reference and that were confirmed by GC–MS.

The gas chromatography conditions are detailed above.

The ion source for the mass spectrography was electron ionization. The ionization energy was 70eV, the auxiliary heating zone was 280 °C, the ion source was 230 °C, and the quadrupole temperature was 150 °C. The data acquisition mode was set to full scan, with a mass scanning range of 50 to 550 m/z and a solvent delay of 3 min. The GC–MS spectra were analyzed via a computer-based automatic search, the automated and manual analyses of a mass spectral library (NIST), and a literature search to identify each component. Finally, the relative contents of each constituent were calculated using the peak area normalization method.

First, the samples were diluted to specific concentrations and added to the individual wells of a 96-well microplate. Next, the bacterial solutions were added and diluted to obtain a final concentration of 5 × 105 CFU/mL, and then cultured for 24 h at 37 °C. A microplate photometer was used to measure the optical density (OD) below 625 nm. Each treatment was the same as the three controls, and the mean value was taken. Control cultures, blank media, bacterial cultures, and penicillin-streptomycin and penicillin G sodium-positive controls were prepared. Inhibition rates were calculated based on Eq. 1 (NCCLS 2002a,b).

For the antifungal experiment, the samples to be tested were diluted by adding fungal liquid to each well of the 96-well plate. The final concentration of Candida albicans was 1 × 105 CFU/mL. Epidermophyton floccosum and Trichophyton rubrum were incubated at 37 °C for 24 h.. The final concentration of Plasmodium sp. was 5 × 105 CFU/mL, incubated at 25 °C for 5 days, and the OD value at 625 nm was measured with a microplate reader. The experiment included a blank control medium, Candida albicans, Epidermophyton floccosum, Trichophyton rubrum, and the Pseudomonas aeruginosa control, along with the amphotericin B and terbinafine positive drug controls. The inhibition rates were calculated as shown in Eq. 1 (Liu 2003).

Dulbecco’s modified Eagle medium (DMEM) culture medium containing 10% fetal bovine serum was used to formulate a single-cell suspension culture. Approximately 3000 to 15000 cells per well were seeded into the 96-well plates, with a volume of 100 µL in each well. Adherent cells were cultured 12 to 24 h in advance. Next, 20 µL of the supernatant from the samples was removed and dissolved in dimethyl sulfoxide. The essential oil samples were rescreened using five concentration gradients: 100, 20, 4, 0.8, and 0.16 µg/mL. Each well had a final volume of 200 µL, each treatment was performed in triplicate, and the mean value was taken. The samples were incubated at 37 °C for 48 h. After the incubation period, the media from the adherent cell cultures were discarded, and a solution of 3-(4,5-dimethylthiazol-2-yl)-5-(3-carboxymethoxyphenyl)-2-(4-sulfophenyl) -2H-tetrazolium (MTS) (20 µL) and culture medium (100 µL) were added to each well. For the cultured suspension cells, 100 µL of the supernatant was discarded from each well; then, MTS solution (20 µL) was added to each well. The cultures were further incubated for another 2 to 4 h. After the reactions had reached completion, the microplate photometer was employed to measure the OD value below 492 nm. DDP and Taxol were used as positive controls for each measurement. The cell growth curves were plotted with the concentration and cell viability on the x- and y-axes, respectively. The two-point Reed-Muench method was employed to calculate the half-maximal inhibitory concentration (IC50) values of the compounds (Li et al. 2017) were calculated as shown in Eq. 1.

3T3-L1 adipocytes (adipocyte lines were preserved in Kunming Institute of Botany), insulin, berberine, and MTS were provided by Kunming Institute of Botany (Kunming, China). After 3T3-L1 cells were induced to differentiate into adipocytes, the cells were digested and seeded in 96-well plates and cultured overnight. After the cells were washed once with a low-glucose medium (glucose concentration 1800 mg/L), 200 μL of low-sugar medium containing different drugs was added. The control group was incubated with DMSO and 100 μM insulin and berberine, respectively, and the test sample group was incubated at a final concentration of 40 μg/mL. Three replicate wells were used per sample.

After incubation for 24 h, 10 μL of cell culture medium was aspirated, and the glucose concentration in the culture fluid was measured by the glucose oxidase-peroxidase method. At the same time, 20 μL of MTS was added to the cell rest medium and incubated at 37 °C for 2 h. The absorbance at 492 nm was used to judge whether the compound was toxic to adipocytes. The glucose concentration and glucose consumption rate were calculated by Eqs. 2 and 3, respectively (Zhang et al. 2011).

Analysis of the Main Chemical Constituents of P. bournei Wood

Under the experimental conditions, the yield of essential oil from the wood of P. Bournei was 0.9 mL/100 g. By GC-MS analysis, a total of 46 components were isolated from the wood samples. A total of 34 compounds were identified, and the sum of the relative contents accounted for 88.38% of the total sample content. The GC–MS spectra were analyzed via a computer-based automatic search, the automated and manual analyses of a mass spectral library (NIST), and a literature search to identify each component. Finally, the relative contents of each constituent were calculated using the peak area normalization method. Table 1 shows the results.

In this study, the chemical constituents of the essential oil from the P. bournei were identified, and their relative contents were measured. Under the experimental conditions, as shown in Table 1, the main constituents of the essential oil extracted from P. bournei were enol compounds. The sesquiterpene content of the wood sample was 84.46%, the monoterpene content was 0.64%, and the other component compounds were 3.28%. The main constituents of wood oil included α-copaene (5.44%), α-muurolene (7.32%), δ-cadinene(11.44%), and 1s-calamenene (5.18%).

Study on the Bioactivity of the Essential Oil

Analysis of the antimicrobial effects of the essential oil extracted from the wood of P. bournei 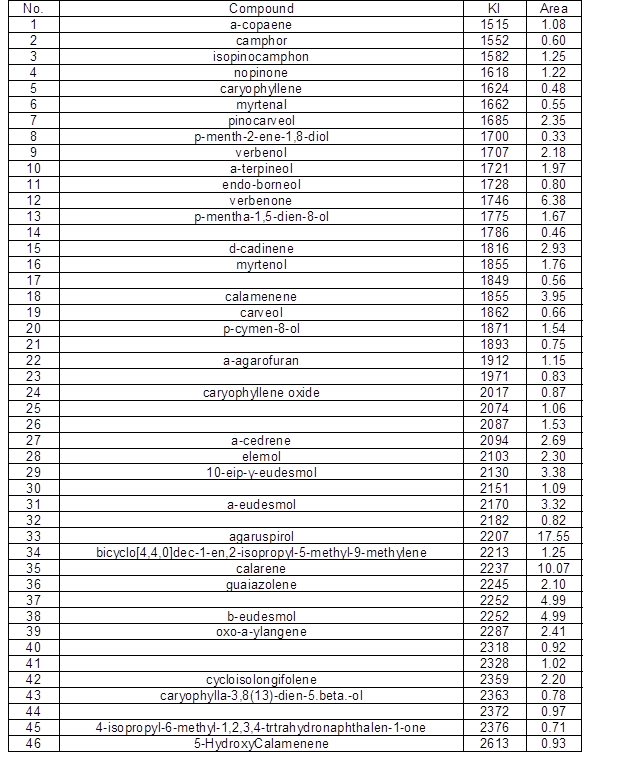 Note: KI values (retention indices) are calculated from the retention times relative to those of the C7–C30 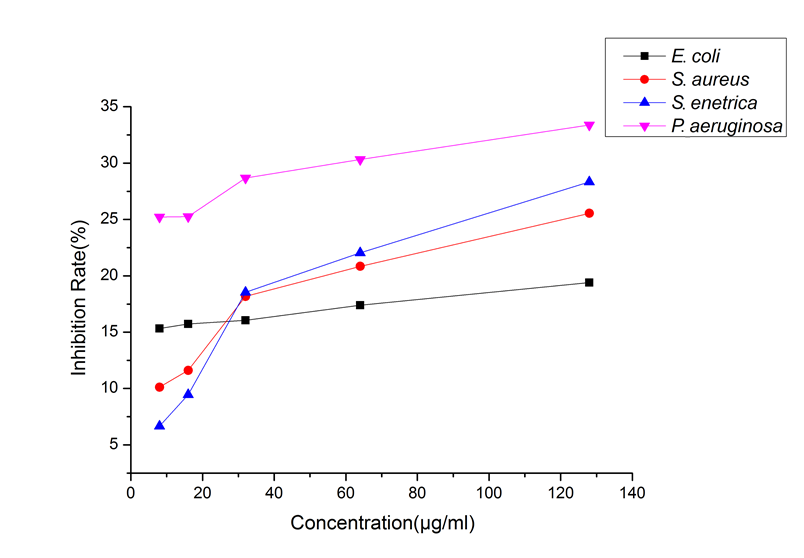 Fig. 1. Inhibition of four bacteria by different concentrations of the wood essential oil from P. bournei 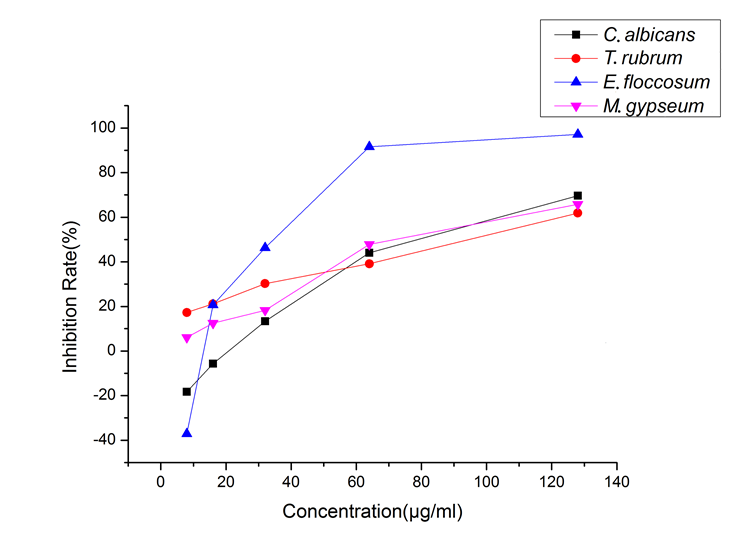 Fig. 2. Inhibition of four fungi by different concentrations of the wood essential oil from P. bournei

Analysis of antifungal activities of the essential oil extracted from wood of P. bournei

Analysis of the antitumor effects of the essential oil extracted from wood of P. bournei

Table 2 shows the results obtained from the in vitro comparison of the IC50 values of the samples. As shown, the essential oil from wood of P. bournei had good activity against leukemia cell lines, with an IC50value of 42.7 μg/mL. The essential oil from the wood of P. bournei exhibited poor activity against lung cancer, liver cancer, breast cancer, and colon cancer cell lines. In particular, the toxic activity of the lung cancer cells was the worst, with an IC50 values of more than 50 μg/mL.

Table 2. Effect of the Essential Oil on the IC50 of Five Cancer Cells

P. bournei wood essential oil exhibited good activity against leukemia cell lines, and exhibited the worst activity against lung cancer cell lines. This is the same as the results for Phoebe hui and Phoebe zhennan wood essential oil (Ding et al. 2017a,b). Further attention could be paid to the research and development of antitumor-related products.

Analysis of the hypoglycemic activity of the essential oil extracted from wood of P. bournei

The authors are grateful for the support of Sichuan University. Thanks to Professor Ning.