In many countries, especially in Asia, bamboo is an important natural resource. Due to its rapid growth rate and excellent flexibility and machinability, bamboo is widely used as a material in construction, furniture, pulping, and handicraft works. It resembles a hollow cylinder with many nodes (circular discs inserted into the hollow cylinder). The function of these nodes is to prevent buckling caused by bending. In addition, they may also act as axial crack arresters. Compared with wood, bamboo has a unique structure.

Hardness reflects the ability of a material to resist the entry of other rigid bodies. It is the common parameter in testing the mechanical properties of materials (Tsoumis 1991). This property is particularly important in processing and utilization of wood and bamboo. For bamboo products such as flooring, hardness is a very important strength standard (Berndsen et al. 2014).

The indentation method is derived from the hardness test. By establishing the connection between the partial indentation test and the conventional mechanical test, the characteristics of the material can be obtained. The main application in the field of wood is the nano-indentation technology, which has the advantages of simplicity and rapidity (Oliver and Pharr 1992; Yu et al. 2007). The mechanical properties of the cell walls and the hardness of the fibers at the cell level were obtained. However, bamboo is a porous, layered, and heterogenous natural polymer biomaterial with a multistage structure, and it has different mechanical properties on the macro scale. Nano-indentation characterization determines the mechanical behavior of a single fiber at the microscopic scale.

To date, wood hardness and half pressure hardness have been used as reference for radial hardness of bamboo (Dong et al. 2009; Ge et al. 2012; Trujillo and Jangra 2016). However, because of the thickness limit of the bamboo and its own arc, the loading of the end and the tangential direction is difficult, and the specimens easily crack when the contact surface is the bamboo green in the radial loading. Thus, there is no definite method for measuring the hardness of the end face of bamboo.

In this paper, a new method was used to study the macro hardness indentation of bamboo based on previous studies and the hardness and compression tests of wood in relevant standards. Based on the traditional material processing machine, according to the principle of depth measurement pressure, a pressure machine was developed for the macro depth measurement instrument. This study developed an indentation hardness test method to provide a fast testing and grading method for bamboo culm.

Nine four-year-old moso bamboo (Phyllostachys pubescens Mazel) culms with a total height of about 13 m and the diameter at the breast height of 9 to 15 cm were harvested from Huoshan Town, Anhui Province, China. The specimens were exclusively taken from three successive internode sections of the fresh culms at the height of 1.3 to 2.0 m. Bamboo rings at three different heights were obtained in two methods (Fig. 1(a)-(b)).

To explore the effect of the height of bamboo on the indention hardness, bamboo with the heights of 20 mm, 30 mm, and 40 mm were cut successively from the bottom to the top of the three internodes. Nine bamboo rings for each height were obtained from three culms according to each sampling method. A total eighteen specimens for each height were obtained.

The upper and lower surfaces of all the specimens were absolutely smooth and parallel to each other and both perpendicular to the axial direction. The height of each bamboo ring was measured at four points, which were respectively in the longest axis and the shortest axis (Fig. 2). The measurement error was controlled within 5%. The moisture content was measured immediately after the test. The average moisture content of all specimens was 42%.

Indention hardness tests were performed on a universal testing machine (TENSON, WDW-T50, Jinan, China) equipped with a load cell with a capacity of 10 KN. According to ASTM D143-14 (2014), wood hardness was determined by with a ball-shaped compression head with a diameter of 11.3 mm (Fig. 3(a)). Bamboo is a hollow cylinder, so to consider the properties of bamboo more completely, a roller compressing head was used across the end of bamboo (Fig. 3(b)-(c)). 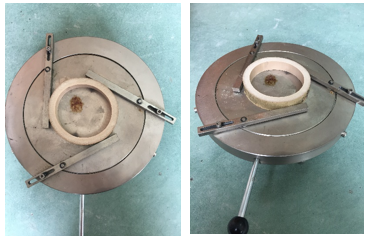 Fig. 5. Centering device of the specimen

For the pipe shape of bamboo culm with thin culm walls, indention hardness of bamboo was tested by U-shaped and V-shaped compressing heads as shown in Fig. 4. The U-shaped and V-shaped compressing heads were fixed on a compression platen. The height of both heads was 3 mm. The surface of platen was smooth. Before the test, the specimen was fixed at the center of the pressure plate, and the position was adjusted using a centering device (Fig. 5).

where w is the width of indentation in the tangential direction of bamboo culm; t is bamboo wall thickness at the indentation, mm.

heights was tested with U-shaped and V-shaped compression heads. The representative load-displacement curves of the specimens are shown in Fig. 7.

Table 1. Indentation Hardness of Bamboo Rings in 3-Different Length under U and V Shaped Compression Head

Table 2. Significant Difference Analysis at the Level of 0.05

Fig. 8. Relationship between the U-shaped (a) and V-shaped (b) indentation hardness and the compressive strength

The representative load-displacement curves of the specimens obtained in three compression methods are shown in Fig. 9. These curves were different in the curve shape and trend. Three representative compression load-displacement curves of bamboo in three different compression head are presented in Fig. 9, which contained three typical segments: linear elasticity segment, non-linear viscoelasticity segment, and failure non-linear segment. The long non-linear segment indicated a long-term deformation behavior until the failure under a maximum load. 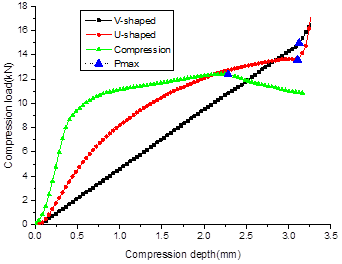 The characters of these curves reflected their compression behaviors. In compression tests, only elastic deformation corresponding to the linear segment in the curve occurred. The viscoelasticity was evaluated under the increasing load within a longer period. Finally, the specimen was crushed under the critical load. The failure modes of bamboo included rupturing the inner layer and humping the outer layer (Fig. 10).

The special failure characteristics of bamboo rings in U-shaped indentation tests were the circular column indentation, the shear rupture of the inner layer, and the brooming of the outer layer (Fig. 10(a)). The failure mode was associated with the circular surface of compression head.

Wang, Z. H. (2001) Study on the Relationship between Variation of Wood Properties and Processing and Utilization, Ph.D. Dissertation, Chinese Academy of Forestry, Beijing.