Poplar wood is a light, soft, and fast-growing timber from a hardwood species, characteristics that make it suitable for several applications. This study focused on the mechanical characterization of Portuguese poplar species, namely white poplar (Populus alba) and black poplar (P. nigra), aiming for its structural use. Therefore, a sample of lamellae was assessed to determine its density and dynamic modulus of elasticity, using a non-destructive device, based on longitudinal vibrations. Clear wood specimens were obtained from a set of lamellae to perform tension and compression parallel-to-grain tests. These tests were used to determine the moduli of elasticity in tension and compression and the tensile and compressive strengths and strains. Also, typical stress-strain curves were identified for the sample studied. The results stressed the potential for structural applications of Portuguese poplar.

Poplar wood is a light, soft, and fast-growing timber from a hardwood species, characteristics that make it suitable for several applications. This study focused on the mechanical characterization of Portuguese poplar species, namely white poplar (Populus alba) and black poplar (P. nigra), aiming for its structural use. Therefore, a sample of lamellae was assessed to determine its density and dynamic modulus of elasticity, using a non-destructive device, based on longitudinal vibrations. Clear wood specimens were obtained from a set of lamellae to perform tension and compression parallel-to-grain tests. These tests were used to determine the moduli of elasticity in tension and compression and the tensile and compressive strengths and strains. Also, typical stress-strain curves were identified for the sample studied. The results stressed the potential for structural applications of Portuguese poplar.

Poplar is a fast-growing hardwood species whose timber is light and soft, with a relatively low density, ranging, on average, between 280 kg/m3 and 520 kg/m3 for a moisture content (MC) of 12% (FAO 1979). These characteristics make it appealing for diverse applications, such as the paper pulp industry, wood engineered products, and the building industry (Balatinecz and Kretschmann 2001; Ettelaei et al. 2019). It can be found around the world, yet the most recent data states that 99% of the global indigenous poplar resources are concentrated in the Russian Federation, Canada, the United States, and China (FAO 2016), with Canada holding the greatest amount of the global area planted with poplar (69%).

Poplar was once considered a weed tree (Balatinecz and Kretschmann 2001), and its wood was not always considered an option for structural applications. However, the possibility of adding value to a relatively abundant resource in some regions of Canada and the United States, especially the Great Lakes region, while taking advantage of a sorting procedure for the harvested poplar to maximize the added value, contributed to changing the mindset about using poplar to produce timber products for structural applications (Garland 1972). A shortage of the usual raw material for structural applications (e.g., pine timber) in countries such as New Zealand, or the need to import it instead of using the local resources (as occurred in the Netherlands) promoted the study of poplar species and varieties (Bier 1985; Fraanje 1998). Meanwhile, concerns about its mechanical performance proved to be unfounded, based not only on specific scientific research (Bier 1985) but also on “standstill examples” of structural applications of poplar wood, some of them centenaries and/or in seismic zones (Bier 1985; Castro and Fragnelli 2006). The use of poplar wood in the production of engineered wood products has contributed to its increasing use as a construction material. These engineered wood products include oriented strand board (OSB), laminated veneer lumber (LVL), parallel strand lumber (PSL), laminated strand lumber (LSL), oriented strand lumber (OSL), and, more recently, glued laminated timber (GLT) and scrimber (laminated scrimmed lumber) (Maeglin 1985; Sheriff 1998; Balatinecz and Kretschmann 2001; Castro and Fragnelli 2006; Joščák et al. 2006; Forest Products Laboratory 2010; Knudson and Brunette 2015; He et al. 2016). Therefore, the main goal is to produce quality material, focusing on high added-value applications while combining its growth and physico-mechanical characteristics to maximize benefits (Huda et al. 2014; Ettelaei et al. 2019).

Despite its limited availability in Portuguese forests (ICNF 2013), recent studies of poplar (Populus × canadensis, Populus nigra L., and Populus alba L.) grown there have shown its suitability for structural purposes, specifically for the production of GLT (Hodoušek et al. 2017; Martins et al. 2017, 2018). To yield an adequate product for the intended purpose, its mechanical properties must be known or easily estimated. For the species under consideration, this information is scarce, as most of the available literature concerns structural applications of Populus species with great representation in North America (Bier 1985; Hernandez et al. 1998; Kretschmann et al. 1999; Balatinecz and Kretschmann 2001; De Boever et al. 2007; Forest Products Laboratory 2010; Huda et al. 2014; Ettelaei et al. 2019).

Timber is a natural material, whose inherent properties may vary considerably among members of the species, depending, for instance, on their growing location; in the same log, depending on where the specimen is collected (in height and cross-section); or even within the same specimen, depending on the presence of defects. The grain orientation also affects the strength and stiffness properties and the material’s behavior. Aiming for applications in the production of GLT beams, it is important to know the material’s mechanical behavior, specifically that of the outer lamellae, whose properties will be intrinsically related with the structural element’s behavior. Beams are usually subjected to bending stresses, which for simply supported beams is associated with an upper zone subjected to compression and a lower zone subjected to tension. Thus, this study aims at contributing to knowledge of the mechanical properties of Portuguese poplar.

To characterize the behavior of the lamellae, which should present the least amount of defects, a series of tests were performed on clear wood specimens. The aim was to obtain the modulus of elasticity (MOE), as well as the tensile (ft,0) and compressive (fc,0) strengths parallel to the grain. For this purpose, from a set of 40 selected lamellae, 20 tension tests and 20 compression tests were performed. The specimens were collected from the lamellae and kept at a controlled temperature (20 ± 2 ºC) and relative humidity (65% ± 5%) at SerQ – Centro de Inovação e Competências da Floresta facilities in Sertã, Portugal.

Several configurations have been adopted for specimens to be tested under tension parallel to the grain. Obtaining specimens from the selected lamellae had some constraints: the maximum length of the lamella, the available length being clear from defects, such as knots, and the absence of cracks or other defects. Therefore, the configuration adopted for the specimens was similar to that of Brites et al. (2012), with a constant thickness of 5 mm and a central cross-section of 10 mm × 5 mm (width by thickness). The length of the specimen had to be at least 9 times the maximum dimension of the cross-section, resulting in the specimen shown in Fig. 1. For a better adjustment between the clamps and the specimens, sandpaper sheets with the same configuration of the clamping zone were glued to the specimens. The tests were performed in displacement control with a constant rate of 0.015 mm/s. To measure the deformation in the specimen, a mechanical strain gauge (Epsilon Technology Corp, model 3542-050M-025-ST, Jackson, WY, USA) (Fig. 1) was used. These data, together with the applied load and deformations from the hydraulic actuator, were collected during each test.

According to EN 408 (2012), the test specimens for compression characterization of structural elements must be of full cross-section with a minimum length of 6 times the smallest cross-sectional dimension. In contrast, NBR 7190 (1997) specifies a square cross-section specimen with 50 mm sides and 150 mm in length for clear wood subjected to compression parallel to the grain. Because the lamellae had thicknesses less than 50 mm (approximately 24 mm), the specimens adopted were 20 mm × 20 mm (cross-section) × 120 mm long, to maintain the proportion specified in EN 408 (2012). Three samples were obtained from each lamella, but only one was tested. Each sample was weighed to determine its density. The tested specimen was the one showing a density closest to the mean density of the lamella from which it was extracted, with the additional requirement of not evidencing defects. Each specimen was instrumented with a strain gauge (FLKB-6-11, Tokyo Measuring Instruments Lab., Tokyo, Japan) glued to two opposite/parallel faces in the longitudinal direction (mid-length) (Fig. 2). The tests were performed under displacement control with a constant rate of 0.006 mm/s, with the load and the strains measured every 0.1 s. The applied load and deformations from the hydraulic actuator were collected during each test.

Fig. 1. Clear wood specimen instrumented for testing under tension parallel to the grain (a) and its nominal dimensions (mm): side view (b) and plan view (c)

Fig. 2. Instrumented clear wood specimen for testing under compression parallel to the grain

The data acquired from each test were analyzed, and the stress-strain curves were determined. From each curve, for tension and compression, the MOE (Et,0 and Ec,0) and the tensile and the compressive strengths parallel to the grain (ft,0 and fc,0, respectively) were determined, according to Eqs. 1 to 4. These values are summarized in Table 1, together with the strains corresponding to the strength values. The mechanical properties obtained from the experimental tests are similar to those available in the literature for poplar species. Figure 3 shows the experimental stress-strain curves representative of the material’s behavior, for both tests performed. These curves were selected as those with ft,0 and fc,0 closest to the maximum, minimum, and average values obtained for the whole sample (see Table 1). Also, a typical curve, computed from the average experimental values, is shown in the same figure.

Table 1. MOE, Strength, and Strain from Tension and Compression Tests Parallel to the Grain

All specimens subjected to tension tests presented linear elastic behavior up to failure. For those subjected to compression tests, a non-linear behavior was observed. Taking into account that timber failure under compression parallel to the grain occurs due to excessive deformation associated with the crushing of its fibers, the non-linear behavior was partially expected. Nevertheless, after the maximum stress occurs (fc,0), it tends to diminish while the strain is still increasing. As the stress decrease is not great, an almost horizontal branch appears, evidencing a ductile behavior. Given the fact that in timber structures the ductile behavior is usually achieved only from the use of steel connections (Del Senno et al. 2004; Tomasi et al. 2009), this is an interesting finding for the use of this species in structural applications insofar as this behavior could be transferred to the structural element itself. These results stress the potential advantages associated with the use of Portuguese poplar for structural applications, as in the production of GLT beams. 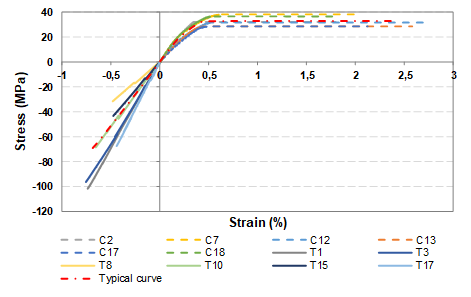 This work was partly financed by FEDER funds through the Competitiveness Factors Operational Programme – COMPETE and by national funds through the Foundation for Science and Technology (FCT), within the scope of the project POCI-01-0145-FEDER-007633, as well as by the Operational Program Competitiveness and Internationalization R&D projects Companies in Co-promotion and Portugal 2020, within the scope of the project OptimizedWood – POCI-01-0247-FEDER-017867. The authors wish to thank the Foundation for Science and Technology for the Ph.D. grant (PD/BD/52656/2014) given to Carlos Martins, and Pedrosa Irmãos for providing the timber.

FAO (1979). Poplars and Willows in Wood Production and Land Use, Food and Agriculture Organization of the United Nations, Rome, Italy.